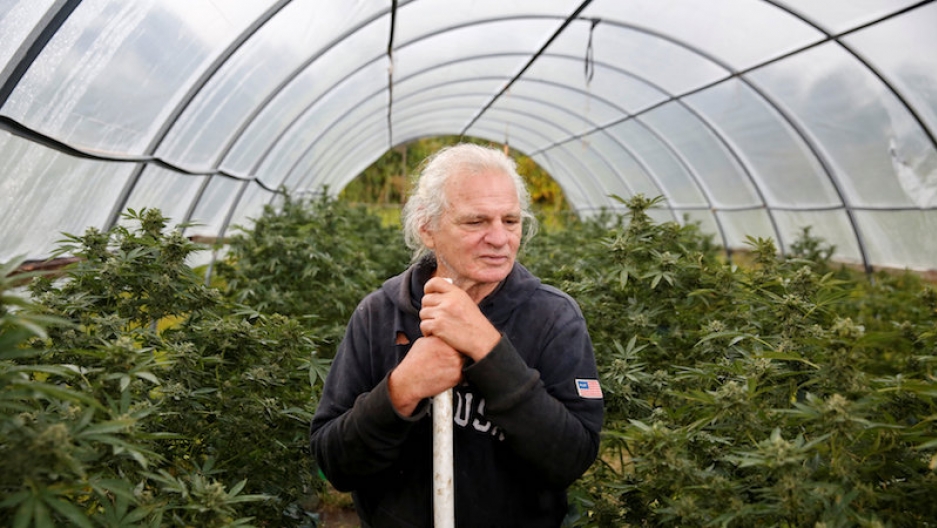 Dale Altman, 66, tends his marijuana plants on the outskirts of Pahoa during ongoing eruptions of the Kilauea Volcano in Hawaii.

Dale Altman and his grandson Josh Doran live on a 5-acre plot atop a hill on Hawaii's Big Island by the erupting Kilauea volcano, where they grow medical marijuana.

They are the last remaining residents on Halekamahina Hill, after two roiling streams of lava spouting from ground fissures and flowing into the sea, completely cut off the community.

Altman, 66, estimates they have $100,000 worth of marijuana in the field that they are harvesting.

Altman says he doesn't want to evacuate, leaving behind his home and marijuana crop with no income and nowhere to live. And atop the hill, the house is safe from the lava flows and its attendant fires.

"We're not stupid. We thought this out," Altman says.

I came by boat to this now-desolated piece of paradise that drew retirees like Altman and adventurers like his grandson to come live under the shadow of one of the world's most active volcanoes.

Since it began erupting on May 3, Kilauea has destroyed more than 600 homes, spread lava over 5,900 acres  and opened up at least 22 fissures in the ground sending fountains of lava up to 150 feet high.

One of those fissures, "Number 8," created one of the lava streams that cut off Halekamahina Hill and continues to churn into the sea.

I accompanied two residents of Halekamahina Hill, Mark Clawson, 64 and Tom McCarroll, 68, who had evacuated when the lava flows began cutting off land access to their homes. They were returning to check on their homes and belongings.

We stayed at McCarroll's house the first night, dining on canned food and washing it down with a bottle of gin McCarroll's wife had left behind as an offering to Pele, the legendary goddess of Kilauea volcano.

The sky above us glowed red from lava in the distance. We suffered bad air that night - heavy, sulfurous "vog" pollution that left us with scratchy throats. A few hours before dawn, I put on a respirator and dozed until the sky started to lighten.

"It's just heartbreaking to come back and see this," said McCarroll, a native of Texas who moved here 11 years ago with his wife, joined later by their three sons.

While the McCarroll house is intact, they can't use it and may never be able to again. "It would be better for Pele to take it," he said, echoing a common refrain that the land around the volcano belongs to the goddess.

We walked to Clawson's house just after dawn thinking to take the most direct route across two hardened flows of lava, steam curling from cracks. We abandoned that course after noting how brittle and hollow some of it was.

Clawson's house is among a couple of dozen farmlets on Halekamahina Hill, which is now surrounded on three sides by lava, including one bright, churning, molten flow.

The eruptions seemed to influence the weather. Fierce hot winds blew between the houses, rattling ripped sheet metal and torn up greenhouses.

Five chickens followed — I'm not sure if they were hungry or just lonely. Three cows stood in a road just above one of the lava flows. Feral pigs, common in the jungles of Hawaii's big island, were now openly patrolling the neighborhood.

At the end of another road, cut off by a lava flow, I did a double take: I was looking at a ridge of black, hardened lava a quarter-mile away and towering 40 feet above me. At this same spot three weeks earlier, I had been looking down into a valley at a new ground fissure oozing lava hidden in a grove of trees.

In May, as the eruption was starting, I thought I was reporting on volcanic activity inside a community. I now realize I had it backwards: this is about a volcano with communities inside it.

The lava pouring into the sea near the bottom of Halekamahina Hill produces a towering plume of steam and hydrochloric acid rain called "laze," a term combining lava and haze.

At Clawson's house the wind turned, blowing the laze plume inland and for hours we were pummeled by some of the hardest rain I have ever experienced.

As we walked back to the boat for the return trip, the rain had mostly stopped. A few drops landed in our eyes and they stung badly.

Clawson says he had been living his dream in Hawaii. He had built his home from scratch. Revisiting his home, however, was an "exercise in futility."

Altman and his grandson Doran, however, are holding out. Doran plans to go out on the a boat and bring back supplies. When I met them, they were repairing their greenhouse.

They have enough food and water for now, Altman says, and they have cellphone reception. But he acknowledged that if they run out of food he and his grandson may reconsider staying.

"If it gets down to rice for every meal, the days are going to get really long," Altman says.