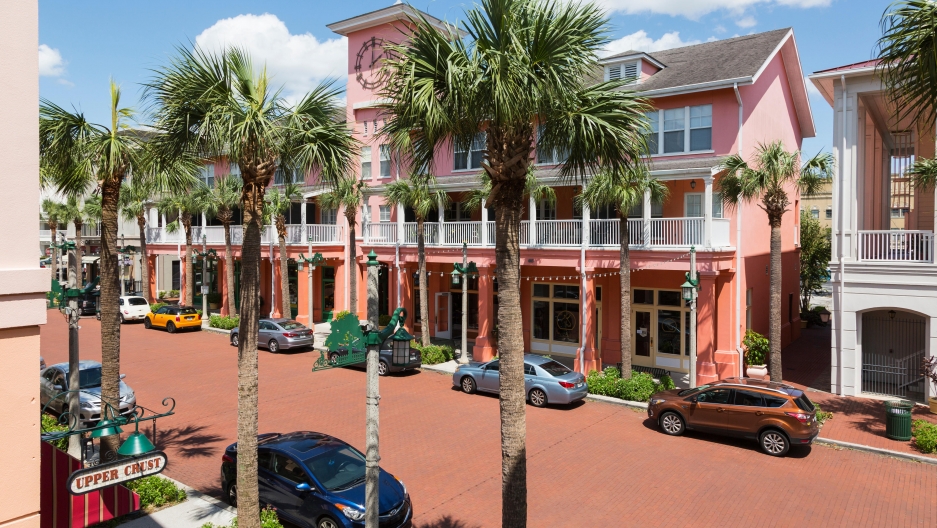 Shops, offices and apartments on Market Street in Celebration, Florida.

One of the biggest draws to Florida is Disney World. It opened in 1971, 16 years after California’s Disneyland. Walt Disney’s original idea for the expansion was so much more than a theme park.

He envisioned a perfect Utopian city: the Experimental Prototype Community of Tomorrow — Epcot. The city was to be a “planned environment demonstrating to the world what American communities can accomplish through proper control of planning and design,” Disney said in a pitch video produced for Florida Legislators.

Disney died in 1966, long before his plan would come to fruition. And as for that grand municipal plan — well, EPCOT became just another theme park. But the Disney company never fully gave up on Walt’s dream. In the early 1990s, on a corner of their giant holdings in Florida, the company founded a new town: Celebration, Florida, a full time live-in Disney experience.

Instead of a futuristic EPCOT, however, what they built was closer to Main Street, USA, with its quaint shops, white-picket fences and green town squares. Celebration, as of the latest Census data currently available, from 2010, has 7,427 people. And while lots of people move there to live the Disney dream 24/7, it is still the real world.

“People moved here and they maybe weren’t happy in their lives in other places and they thought, well, I’m going to Disney World because, you know, Tinker Bell is going to sprinkle that pixie dust and we’re going to have a happy family now,” one resident tells Kurt Andersen. “Yeah, not so much.”

To hear more about Andersen's expedition to the Happiest Place on Earth, check out our full American Icon episode on the Disney parks.