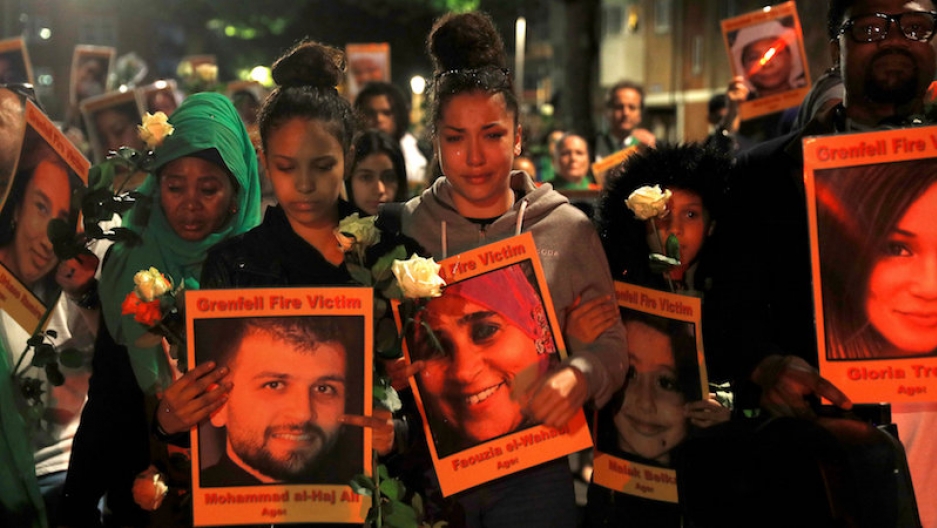 Relatives, survivors and friends of victims of the Grenfell tower fire walk to the tower to hold a vigil, one year after the fire.

Survivors of London's Grenfell Tower fire, and friends and relatives of the 72 people it killed, held vigils and prayed together as they marked the first anniversary of a disaster that still haunts Britain.

Grenfell Tower, a social housing block that was home to a close-knit, ethnically diverse community, was engulfed by flames in the middle of the night of June 14, 2017, in the country's deadliest domestic fire since World War II.

The disaster, which occurred in one of London's richest boroughs, raised profound questions over social inequalities, poor quality public housing and neglect of immigrant communities.

Queen Elizabeth and her new granddaughter-in-law Meghan, out together on an official visit to Chester in northwest England, were among those who observed a national silence in honor of the victims at mid-day.

The silence was also observed by survivors and bereaved people at a gathering near Grenfell Tower, as well as in the Houses of Parliament and in government buildings.

It lasted 72 seconds, one for each of the people who died on the night of the fire, and one for a woman who died in hospital months after she was rescued from the burning building.

Earlier, the England soccer team, in Russia for the World Cup finals, observed a minute's silence before starting their training session.

The charred ruin of the block, covered in white sheeting, was lit up overnight in green, a color adopted by the community of survivors and bereaved people as a symbol of the tragedy.

Nearby tower blocks were also lit up in green, as was Number 10 Downing Street, the official residence of Prime Minister Theresa May, a few miles away. A floral tribute from May was placed at a church close to the tower, with a hand-written note saying the victims would never be forgotten.

There were emotional scenes close to the base of the tower, where community members walked silently to a vigil, holding up pictures of those who died.

The victims included people of all ages and of 19 nationalities. Individual tributes have been paid to them all at a public inquiry into the disaster, painting a portrait of a vibrant community.

As some community members broke their Ramadan fast on Wednesday evening, eating together in a street close to the tower, the driver of a train passing by on an elevated rail line stopped the vehicle, stepped out of his cabin and raised a green banner. The people below cheered.

At St Clement's, a church where people fleeing the burning building had gathered on the night of the fire, an all-night, silent vigil took place.

In the run-up to the anniversary, the top floors of the charred ruins of the building have been covered with white sheeting displaying large green hearts and the words "Grenfell Forever In Our Hearts".

A public inquiry into the causes of the fire is not sitting in the anniversary week, out of respect for the victims and survivors.

The blaze is also the subject of a police inquiry which could result in criminal charges related to negligence and breaches of health and safety regulations.

A previous version of this story misstated the number of deaths in the fire.