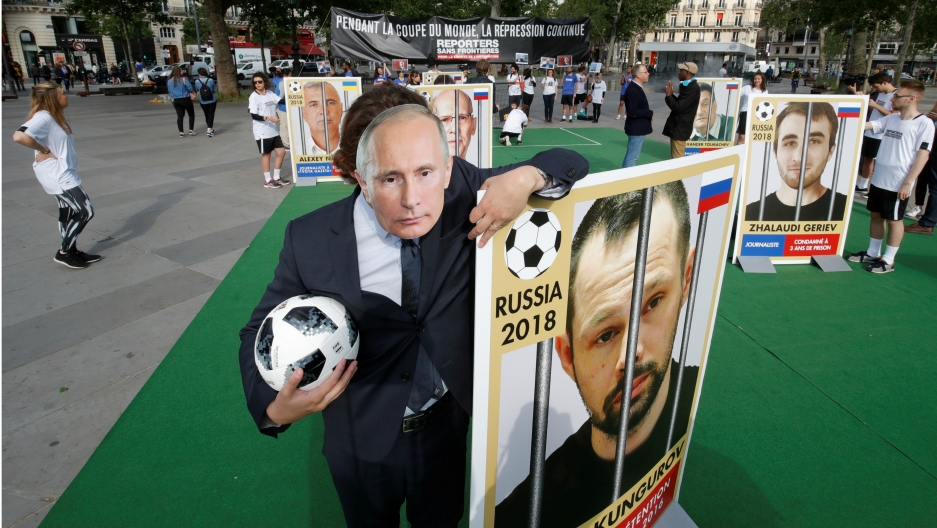 An activist with Reporter Without Borders, wearing a mask depicting Russian President Vladimir Putin, stands next to a giant portrait of imprisoned Russian journalist Alexei Kungurov on the Place de la Republique, transformed into a soccer field to denounce abuse of press freedom in Russia before the start of 2018 FIFA World Cup, in Paris, France, June 13, 2018. As Russia hosts the cup, it's being condemned for many of the same human rights abuses it was criticized for in the lead-up to the 2014 Olympic Winter Games in Sochi. This time, Putin seems much more resistant to Western criticism.

Back in 2010, President Vladimir Putin helped secure Russia’s bid to host the 2018 World Cup with guarantees the world would see a Russia both open and welcoming.

This week, the Russian leader said his country had made good on that promise.

“We’ve done everything to ensure our guests — sportsmen, experts and, of course, fans feel at home in Russia,” said Putin in a video address released by the Kremlin. “We have opened our country and our hearts to the world.”

Indeed, as Thursday evening’s opening match between Russia and Saudi Arabia kicked off, the stadiums appeared ready, the fan zones (mostly) built, the bartenders ready to pour the beer, and — Russian authorities insist — the hooligans instructed to stay away.

But as Russia hosts world football fans on the biggest stage of “the beautiful game,” human rights defenders warn the Kremlin is failing to meet one additional obligation: protecting social and political freedoms at home.

“There is no doubt that the government is craving this international prestige and wants to put Russia in the best light possible,” said Yulia Gorbunova, a researcher at Human Rights Watch’s Moscow division.

The problem, Gorbunova added, is this: “The situation of human rights now is the worst it’s been since the fall of the Soviet Union.”

There’s a certain deja vu in the air.

Nearly identical charges were levied against Russia before it hosted the 2014 Olympic Winter Games in Sochi. Then, as now, concerns focused on everything from political repressions, migrant labor violations in building sports infrastructure and pressure against LGBTQ groups to environmental and animal rights violations.

And yet, in 2014, Putin was willing to appease his critics to a degree. Ahead of the Sochi Games, the Russian leader made several high-profile gestures in a bid to ease Western pressure — including the amnesty of jailed Greenpeace activists, members of the feminist punk collective Pussy Riot and oligarch-turned-prisoner of conscience Mikhail Khodorkovsky.

This time? No such luck. 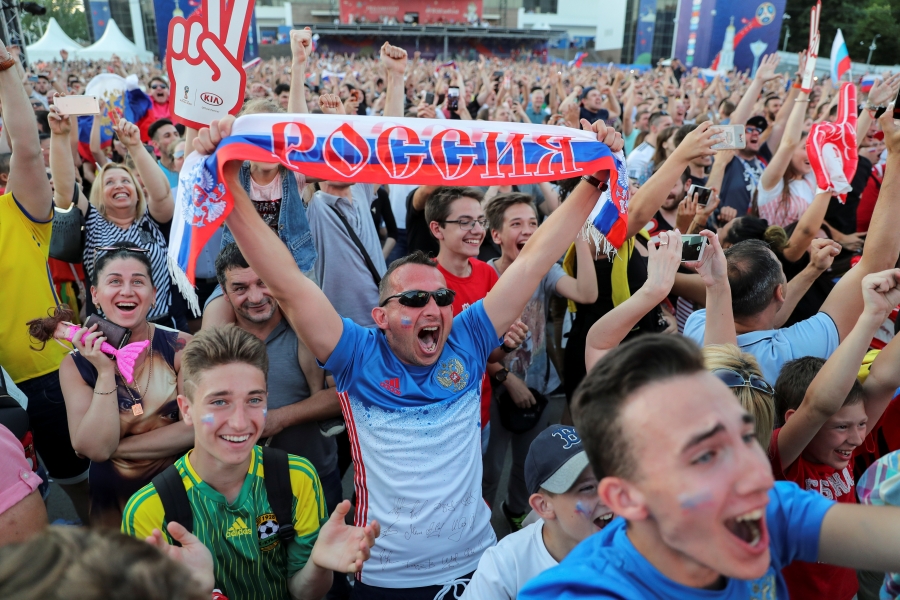 Russia fans celebrate as the Russian national soccer team scores in a 5-0 victory over Saudi Arabia to open the 2018 World Cup, in Rostov-on-Don, Russia, June 14, 2018.

What a difference four years can make.

Since Sochi, the world has witnessed Russia’s 2014 annexation of Crimea and the subsequent fallout in Russia-West relations over Western sanctions, the downing of Malaysian Airlines Flight 17, US election meddling allegations and charges the Russian government engineered a doping program aimed at securing a (now tarnished) first place medal finish in Sochi — among other issues.

The constant criticism has so inured the Kremlin to Western harangues that most are now merely met with a shrug and denial.

“Putin saw that there’s no need to worry about these things,” said Leonid Volkov, a pro-democracy activist and key adviser to opposition leader Alexey Navalny, who was released from prison Thursday after serving a 30-day jail term for organizing anti-government protests.

Government critics say they are not out to ruin the World Cup fun but argue the political realities of the Putin regime also shouldn’t be ignored.

Convicted to a 20-year sentence by a Russian military court in 2015 on charges of terrorism in post-annexation Crimea, Sentsov has been on a hunger strike since May 14 to demand the release of dozens of imprisoned Ukrainian nationals caught up in Russia’s simmering proxy war with neighboring Ukraine.

Hopes for a wider prisoner swap between Ukraine and Russia were dashed after Putin rejected calls to include Sentsov on the grounds that the director — a resident of Crimea — had become de facto a Russian citizen. 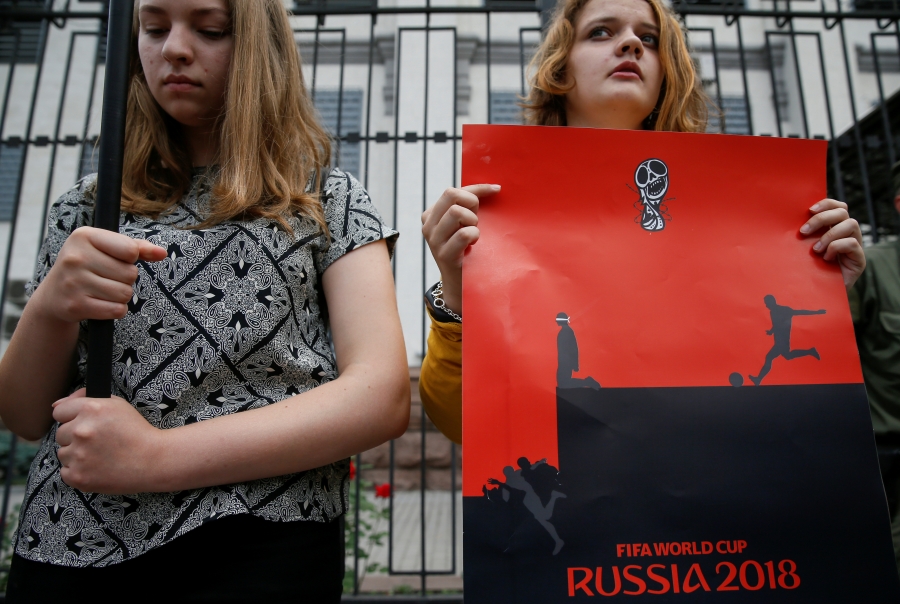 A demonstrator holds a poster during a rally demanding the liberation of Ukrainian film director Oleg Sentsov by Russia, in front of the Russian embassy in Kiev, Ukraine, June 13, 2018.

Human rights advocates point to evidence of the abduction and torture of gay men in the region — charges the Chechen leader has denied — as not only abhorrent but in violation of FIFA’s anti-discrimination bylaws. The ongoing trial and detention of Oyub Titiev, one of Chechnya’s most respected human rights activists, on what are widely regarded as trumped-up drug possession charges, is also troubling.

Those concerns burst into the open this week when the Chechen leader corralled Egyptian star forward Mo Salah — among the world’s most admired players (and currently nursing a shoulder injury)  —  from his hotel to appear before stadium cameras in a controversial PR coup.

“Of course, Putin uses sport as a key part of his rule,” said Volkov, the pro-democracy activist.

The World Cup, he notes, is the latest in a series of high-profile sporting investments by the Russian president aimed at showcasing Russia’s resurgence under Putin’s rule.

Only it’s not clear the party is for everyone.

In the run-up to the cup, students at Moscow State University say they were subjected to harassment by security services for protesting the location of Moscow’s fan zone, located just off the university grounds.

“They accuse protesters of trying to ruin the World Cup,” said Igor Vaiman, 21, a physics student. “But the security services and repressions hurt World Cup much more than we could ever do.”

Meanwhile, Russian football fans have still another concern: the national team. FIFA ranks it 70th — the lowest ever for a host country in pursuit of a World Cup championship.

Putin has urged the Russian squad to “fight until the very end,” but fans are preparing for the worst, despite the country spending more than $11 billion hosting the event.

"Ole Ole Ole,” a song by the comedian singer Semyon Slepakov that imagines the Russian team’s failures after Putin taps Ramzan Kadyrov as head trainer in a desperation move — has already emerged as the unofficial anthem to the tournament.

Viktor Levin, a retired sportscaster who called games for the legendary teams of the Soviet Union, says the problems with modern Russian football run deep.

“In the Soviet Union, our team battled out of genuine patriotism,” said Levin. “Now it’s all about money.“

Even the fans have changed, he argued. “Before we went to watch football with our kids. It was a family event. Now all these young people do is drink, wave their scarves, and fight.”

Viktor Levin was a sportscaster for the Soviet Union's soccer teams. “In the Soviet Union, our team battled out of genuine patriotism,” he said. “Now it’s all about money.“

Levin's friend Marshan listened in and nodded in agreement.

“What can I say? We’re bad at football,” he said, before adding a caveat that Putin could surely appreciate.

“But nobody hosts better than Russia! I guarantee it!”