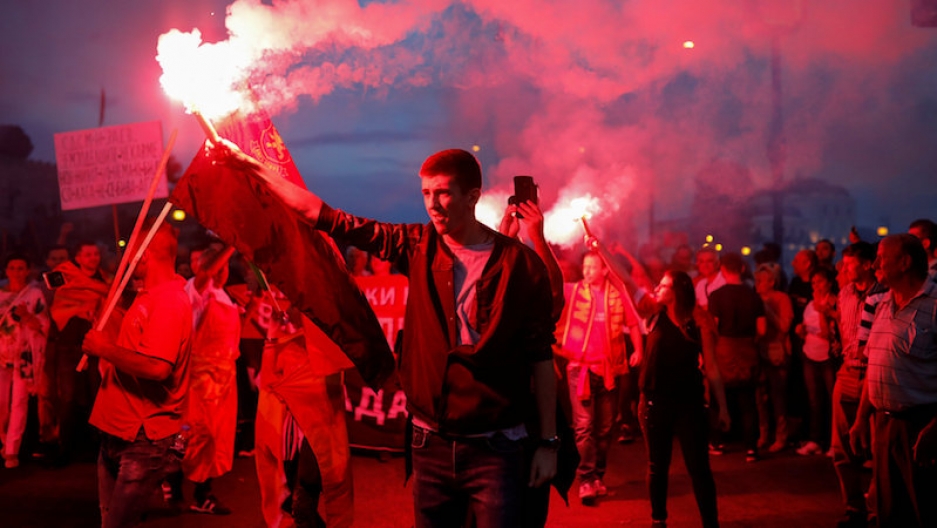 A supporter of opposition party VMRO-DPMNE lights a flare as he takes part in a protest over compromise solution in Macedonia's dispute with Greece over the country's name.

The "Republic of Northern Macedonia" — the proposed new name for the country once part of Yugoslavia — is meant to settle a diplomatic standoff with Greece, but will not satisfy some nationalists on either side of the border.

When it declared independence in 1991, many Greeks felt the country had hijacked their ancient cultural heritage as Macedonia is the birthplace of Alexander the Great as well as the name of a province in northern Greece.

The new name, agreed by politicians from both countries on Tuesday, should end decades of diplomatic conflict and make it easier for Macedonia to join the European Union and NATO.

But the deal still requires ratification by the two national parliaments and a referendum in Macedonia, and not everyone is inclined to vote "yes."

"We are Macedonians and we are not interested in changing our name," said Marica, a housewife from the town of Ohrid.

"For my whole life I've been called Marica, it would be the same as if someone would force me now to change my name."

"The Former Yugoslav Republic of Macedonia" joined the United Nations in 1993, but most countries have ignored that provisional name and refer to it simply as Macedonia.

At a protest in Skopje on June 2, people waved Macedonian flags, and the occasional Russian one — indicating their opposition not only to the name change, but also the closer allegiance to the west that is likely to follow.

"I have nothing good to say about Greeks as they are only creating trouble for us," Petre, a locksmith from Skopje, told Reuters.

"We don't need to join NATO or the EU, this is not in our tradition. As an orthodox Christian, only Putin can save us."

Many Macedonians, however, welcomed the rapprochement with Greece.

"Greeks are a brotherly nation to us. If there weren't so many aggressive politicians who made this problem between us, our cooperation would be much better," said Maja Canakjevik, a musician and former general manager of the Macedonian Philharmonic.

Some Macedonians believe EU and NATO membership could help the economy, others have their doubts.

Muharem, who rents out properties in an old quarter of Skopje, said: "Salaries here are about 200 euros ($235) a month, and I don't think this will change if we join NATO."