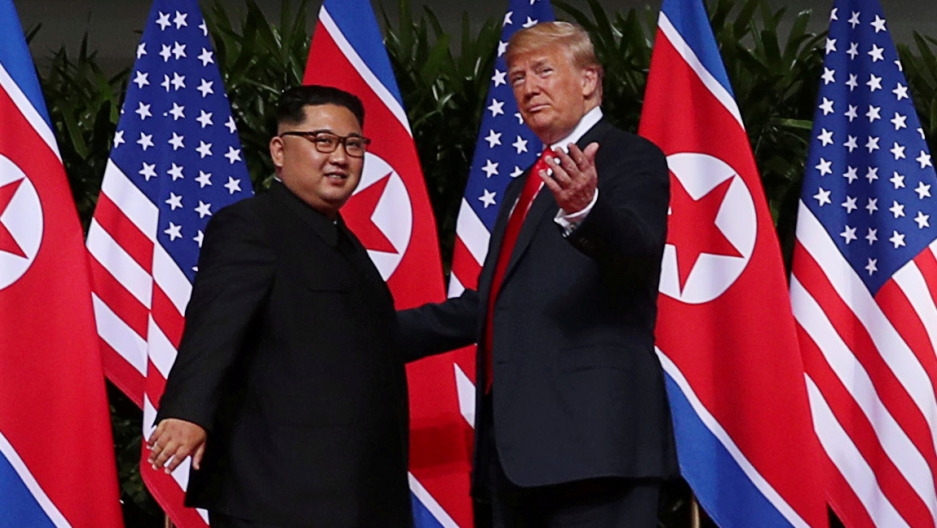 For many South Koreans, the summit between President Donald Trump and North Korean ruler Kim Jong-un has brought their divided peninsula one step closer to peace.

Even though the declaration signed by both leaders at the conclusion of their historic meeting in Singapore was high on lofty goals and short on details about how central issues like complete denuclearization would actually be achieved, the most important outcome is that Trump and Kim are no longer threatening mutual annihilation.

“I feel these leaders declared they are against war and that peace can finally happen,” says Kim Hon-ho, an office worker who watched television coverage of the summit along with other passengers who were waiting for trains at Seoul Station.

South Koreans had already warmed up to Kim Jong-un following North Korea’s participation in the Pyeongchang Olympics and two summits held this spring with President Moon Jae-in. It seemed unlikely that Donald Trump, who less than a year ago vowed to unleash “fire and fury” upon North Korea, would take the same kind of shine to the person whom he used to refer to as “little rocket man.”

But during their signing ceremony, Trump noted that he and “Chairman Kim” had already formed a “special bond.”

“At first I thought Trump seemed threatening,” said 27-year old Jung So-young, but she now sees the potential for a trilateral summit between the US president and both Korean leaders.

President Moon, who had staked much of his domestic and international reputation on being able to bring the two adversaries together, was quick to offer his congratulations.

During a phone call with Trump, who was already onboard Air Force One, the South Korean leader said the summit has laid a foundation not only for peace in Korea but for the entire world, according to a statement issued by his office.

But reports indicate that the Seoul government, as well as US forces in Korea, were taken by surprise following a pledge made by President Trump during a post-summit press conference to end annual joint military exercises between US and South Korean forces — calling them provocative and expensive.

North Korea frequently labels these drills as a rehearsal for invasion and has in the past threatened to turn Seoul into a “sea of fire” or launch ICBM attacks against the US during these maneuvers.

"This is a huge concession, a unilateral concession, which was a huge win for North Korea and China,” Lee writes in a message to PRI. “It was a loss for the United States, and a bigger loss for South Korea.”

Secretary of State Mike Pompeo will most likely be asked to further explain the president’s decision when he briefs officials in Seoul on Wednesday.

A less divisive, yet still vague, agreement made during the summit was for the US and North Korea to “join their efforts to build a lasting and stable peace regime on the Korean Peninsula” — or to finally replace the Korean War’s frequently violated 1953 armistice agreement with a peace treaty.

All three nations have in recent months shown support for this gesture, which opinion polls show has the backing of the vast majority of the South Korean public.

“The end of the Korean War would mean a lot to me, both emotionally and practically,” says 30-year old Choi Ji-eun, who works at a local research institute, noting that such a treaty would be largely “symbolic.”

But Choi cautions that she does not hope this leads to the unification of the south and north.

Choi says that unlike older generations, who have long desired to reunify the peninsula under Seoul’s control, younger South Koreans aren’t as enthusiastic about absorbing their much less developed neighbor.

A peace treaty would mean that North and South Korea would recognize each other as independent nations, Choi explains. “It’s more practical that they go their own ways,” but cooperate economically or through the sharing of resources, she adds.

The joint declaration signed by Trump and Kim called for a follow-up meeting between their countries’ envoys at the “earliest possible date”.  And given the lack of substance in the document, much work remains before fully implementing any of the stated agreements.

Shim Jae-yeon, who glanced between Seoul Station’s television and the train arrivals and departures board, says it‘s still “too early” to see what are the most positive results to come out of this week’s summit.

Making a case for patience, the 78-year old says “more talks and more time is needed,” adding that she “never thought she’d see the day” when the president of the United States and the leader of North Korea meet face to face.