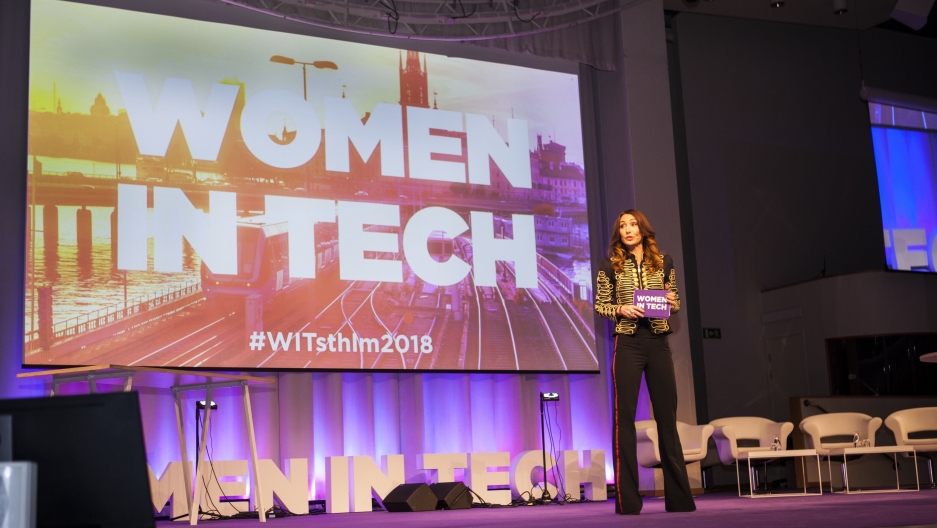 The Women In Tech Stockholm summit is an annual conference for women in the technology industry in Sweden. This year one of the key panels was ""#Metoo and #Teknisktfel — now what? Driving real and long-lasting change in the tech industry." Sabinje von Gaffke is pictured speaking at the event.

When the callout was published on Nov. 19, 2017, all kinds of stories about sexual harassment on the job immediately began rolling in.

These are just a few of the nearly 500 testimonies that women in Sweden’s tech industry have shared over the last few months as part of a movement known as #Teknisktfel, which translates to “technical error.”

Inspired by the #MeToo movements that spread around the world last fall, #Teknisktfel is a petition, hashtag and website run by seven women in Sweden’s tech industry dedicated to chronicling the harassment and discrimination that women in the field face every day. And many insiders say it’s the first time that there has been such a public conversation in an industry in Sweden that is already struggling to attract and retain female workers: Just 21 percent of the country's engineers are women, according to Teknikföretagen, the Association of Swedish Engineering Industries. It’s a surprisingly low number for a country known for its egalitarian society and excellence in technology.

Now, #Teknisktfel organizers are working with activists across industries to make the #MeToo movement a policy priority in Sweden. They say the goal is not to call out individuals or companies for bad behavior but to address the stubborn structures in Swedish society that create difficult workplace environments for women in the first place.

“A general issue in the tech industry is that you are expected to play on the men’s field with their rules,” said Linda Rydén, an engineer who first organized #Teknisktfel. "The locker room culture, you have to accept it. Or else you have to leave.”

The industry has responded in force: Since November of last year, 1,940 people have signed a petition calling for zero tolerance of sexual harassment, an anonymous whistleblower system and education around sexual harassment, among other demands. That’s in addition to the hundreds of harassment stories that have poured in so far.

“I was not surprised,” said Rydén, reflecting on the influx of testimonies. “It makes me really sad. It’s clear that this behavior is so normalized that we don’t even notice it anymore. We have learned that this is what you have to accept to be in the business.”

#Teknisktfel organizers say the problems seem to cluster at the management level, whether as a perpetrator or an obstacle to culture change. They've heard plenty of unsettling stories — such as about a boss who told an employee she should wear short skirts and low-cut tops to get ahead, and a job interviewee who, after seeing pictures of naked women on the production floor, was asked by a manager if she could handle the company’s “funny” culture.

Related: Women in the global aid sector are saying #AidToo

A recent study from the Swedish gender-equality nongovernmental organization, AllBright, found that just 1 in 5 managers in Sweden’s publicly traded companies are women. While Sweden has an anti-discrimination law that governs harassment and says companies are obliged to investigate if an employee says he or she has been harassed, this power imbalance can make action difficult.

“Too often, there are persons in power position who commit abuse,” the organizers wrote in tech publication, Ny Teknik, in January 2018. “It may be one's own boss. Therefore, the vulnerable always needs the ability to turn to someone outside the regular reporting chain and who has the skills required to handle the notifications.”

There's little research exploring whether harassment and belittling comments lead to Swedish women leaving the tech workforce. However, several women who shared harassment stories with #Teknisktfel added that they later left their jobs, according to Rydén. In the US, a study from Kapor Capital found unfairness or mistreatment accounted for nearly 40 percent of tech leavers.

But the obstacles that confront Swedish women in the tech industry go deeper than harassment. Research from Karlstad University found men reach higher positions in the IT industry to a greater extent than women, while women’s technical abilities are likelier to be underutilized.

The problem also extends back to childhood. Technology is perceived as a masculine field in Sweden, and this stereotype affects perceived competence, confidence and career choices among young girls. In a study released last fall, Lund University researchers found that girls were likelier to underestimate their competence in masculine-stereotyped fields, such as technology and science. The study also found that confidence in abilities and worries about fitting in strongly influenced girls’ career choices, so these stereotypes impact the decision to study STEM in high school and beyond. Less than 25 percent of STEM degrees in Sweden go to women.

This isn’t just a problem for Sweden. Researchers found there’s a “gender-equality paradox” when it comes to women in STEM: The higher a country ranks on gender-equality indexes, the fewer women STEM graduates the country produces. Finland and Norway graduate fewer women in STEM than Sweden, while in Algeria, over 40 percent of STEM graduates are women.

Related: Sexism and the #MeToo movement inspired this 'sassy' singer

Una Tellhed, the lead author of the Lund University study and an expert on psychology and labor segregation, said this highlights how combating gender stereotypes has proven even more difficult than passing equality policy.

“Even if Sweden is considered one of the most gender-equal countries in the world, we still stereotype competencies like the rest of the world,” she said.

Attracting and retaining talent from all genders is a topic of concern as Sweden is facing a deficit of skilled workers to fill its historically strong technology industry (which includes Spotify and Scania). In a recent survey, half of Teknikföretagen’s member companies reported being unable to develop products and services as planned due to a lack of staff with the required skills. Tech companies in Sweden have responded to #Teknisktfel with varying levels of commitment to change.

#MeToo has rapidly spread across Sweden with over 65 industry-specific callouts (ranging from the culinary world to doctors and medical students to opera singers). While petitions have been signed by some 60,000 women in the country, the movement hasn’t been without controversy. A prominent theater director committed suicide in March, months after a report in Aftonbladet suggested he created a culture of harassment. The report relied almost exclusively on anonymous interviews and did not include opinions of those who did not agree with their characterization. It set off a debate among journalists about responsibility in reporting #MeToo.

But Rydén emphasized that the goal is not to single out individuals or companies and noted the vast majority of stories and perpetrators have largely remained anonymous as the movement seeks a broader cultural shift.

#Teknisktfel has now teamed up with a coalition of other #MeToo movements, with a focus on structural change. Coalition leaders have met with the country's minister for gender equality twice so far this year, discussing a list of seven proposals for measures to deal with sexual harassment and abuse. These include better consent education, a national whistleblower system and investigations into harassment in the workforce.

Rydén believes their collective voice is already making a difference.

“One thing I have noticed that is really positive is increased awareness,” she said. “People are discussing it more and they are reflecting more. They are thinking twice before saying something. And I think that is a really big thing, and I think in that way, we are changing.”