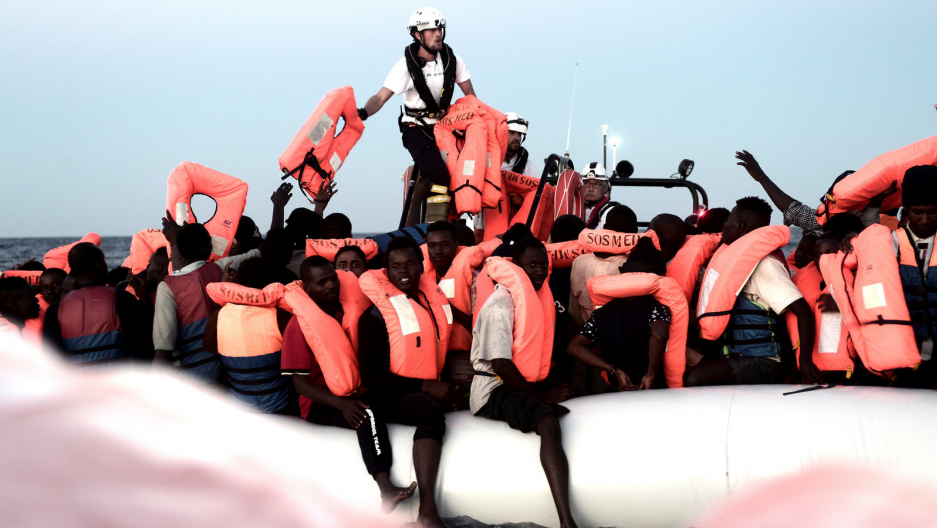 Migrants are rescued by staff members of the MV Aquarius, a search and rescue ship run in partnership between SOS Mediterranee and Doctors Without Borders in the central Mediterranean Sea, June 9, 2018.

Spain offered on Monday to take in a humanitarian ship stranded in international waters with 629 migrants aboard, prompting Italy's new anti-establishment government to claim victory in its bid to get European partners to help more on immigration.

Italy and Malta had both refused to let the Gibraltar-flagged Aquarius ship, whose passengers include 11 children and seven pregnant women rescued off the coast of Libya at the weekend, to dock, prompting the European Union and the UN refugee agency to call for a swift end to the standoff.

The ship had sailed north toward Italy but Matteo Salvini, the head of the far-right League party who became interior minister this month vowing to curb an influx of migrants from Africa, blocked it and said it should go to Malta instead.

Malta refused, saying it had nothing to do with the rescue mission, which was overseen by the Italian coastguard. The tiny island nation with fewer than a half a million inhabitants says it already accepts more refugees per capita than Italy, which has taken in more than 600,000 boat migrants since 2014.

"Victory!" Salvini tweeted after Spanish Prime Minister Pedro Sánchez, a socialist who took office just over a week ago, gave instructions that the ship be allowed to dock in the eastern port of Valencia.

"To politely raise one's voice pays off," Salvini told a news conference in Milan. "It's something Italy hasn't done for many years."

Italian Prime Minister Giuseppe Conte said on Facebook that Spain's offer meant Italy was "no longer alone" and now it was time to make EU asylum rules "more fair for everybody."

The standoff will help Mediterranean EU states like Italy, Spain and Malta, who have been on the geographic front line of the migrant influx, to raise pressure on EU partners further north ahead of a June 28-29 summit that will, in part, consider changes to EU asylum law to better share the burden of incoming migrants. More than 1.8 million have entered Europe since 2014.

SOS Mediterranee, the charity co-operating the migrant ship, said it was awaiting instructions about where to disembark from Italy's coastguard, which coordinated the sea rescues.

"Several (migrants) need medical assistance, which requires a rapid solution," Doctors Without Borders, which runs a medical clinic on the Aquarius, said in a statement.

Valencia is almost three days' voyage for the Aquarius, while Italy and Malta are just hours away.

"Malta will be sending fresh supplies to the vessel. We will have to sit down and discuss how to prevent this from happening again. This is a European issue," he said on Twitter.

Sánchez said the invitation, his first international initiative since toppling his corruption-tainted conservative predecessor, was a way to "comply with international commitments regarding humanitarian emergencies."

Spain receives a tiny percentage of the total asylum claims in Europe, and of those received it accepts less than the EU average, according to the Spanish Commission for Refugees. The EU border agency expects illegal migration will rise again in 2018, potentially turning migration into a more pressing issue for Sánchez.

The mayors of both Valencia and Barcelona had already offered to let the boat in at their ports. "Encouraging change in humanitarian policy from [Sánchez's] government," Barcelona Mayor Ada Colau wrote on Twitter after the government's offer.

Conte said he would discuss the situation further with Salvini and other ministers on Monday evening.

Pictures from aboard the Aquarius, which is operated by SOS Mediterranee and Doctors Without Borders, showed hundreds of Africans huddled aboard, including a young girl wrapped in a blanket in the arms of a rescue worker.

After urging a quick resolution of the impasse earlier in the day, the UN refugee agency, through spokesman Charlie Yaxley, said Sánchez's offer "is a welcome development and a great display of solidarity from Spain with refugees."

EU law requires asylum seekers register in the first safe country they reach, but frontline countries such as Italy and Malta say the burden needs to be shared out across the bloc.

"Italy doesn't shrug off its responsibility when it comes to saving lives, but it asks that others do the same," Transport Minister Danilo Toninelli, in charge of Italian ports and coastguard, said after the Spanish announcement.

Not everyone in Italy agreed with Salvini's hard line; the mayors of a number of southern cities, including Naples, Palermo and Messina, said they would welcome the migrants.

Earlier in the day, the European Commission had urged action. "We are talking about people. ... The priority of both the Italian and Maltese authorities should be ensuring these people receive the care they need," Commission spokesman Margaritis Schinas told a news conference.

By law, it would be difficult for Italy to refuse the boat a safe haven, as its own coastguard coordinated the rescues, picking up more than 280 migrants in its own vessels before transferring them to the Aquarius to be taken to safety.

Salvini doubled down on his position earlier on Monday, warning another rescue ship, the Sea Watch 3, registered in the Netherlands and operated by a German charity, that it may not be allowed to dock in Italy if it picks up migrants off Libya, where it is currently sailing.

"Malta is not acting, France rejects them, and Europe doesn't care," Salvini wrote. "I've had enough."

The Sea Watch still did not have any migrants on board, spokesman Ruben Neugebauer said. While he agreed that there should be a more fair distribution of migrants in the EU, he said Salvini was "making a point at the cost of people in distress. ... It's highly irresponsible."