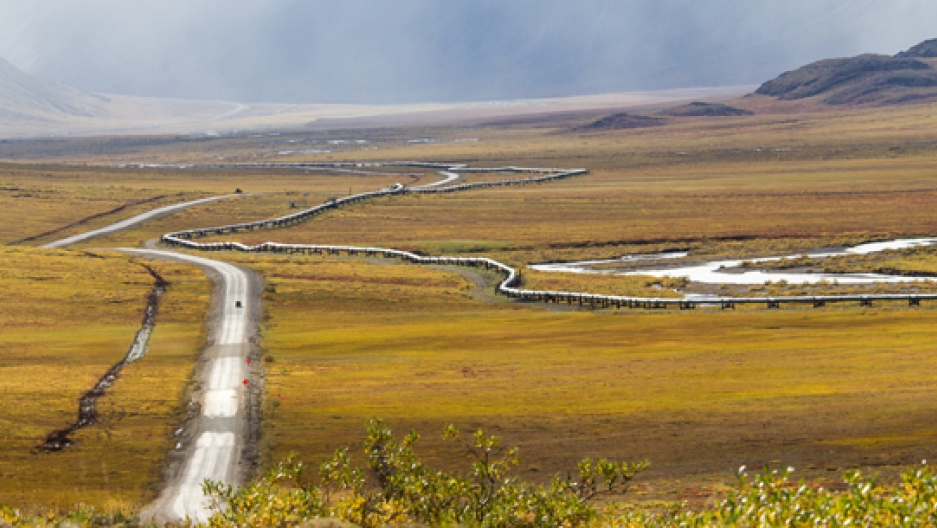 Fossil fuel production revenues account for about 90 percent of Alaska’s state budget, and much of the fuel is transported through pipelines such as the Trans-Alaska Pipeline, above.

The human dilemma of climate change is front and center in Alaska.

The far north is warming much faster than the rest of the world, causing permafrost to melt and forcing coastal Alaskans to retreat from the sea. Yet, $9 out of every $10 in state coffers come from the North Slope production of petroleum, which accelerates climate disruption when it’s burned.

In an effort to build consensus to address this dilemma, Gov. Bill Walker created the Climate Action for Alaska Leadership Team, with Lt. Gov. Byron Mallott as its chair. Mallott is also a Tlingit clan leader in Southeast Alaska.

“When the governor and I determined that it was time for Alaska to stand up its own climate change initiative,” Mallot says, “we believed that all of the residents of Alaska and their institutions, their communities and their leadership needed a voice in this dialogue and in the creation of the policies that will drive our response to climate change.”

As a result, CAALT is a broad-based group that includes “all the economic, social, leadership and institutional sectors of our state,” Mallot says. “The governor was particularly anxious that the youth have a voice, so we have two youth members of the CAALT.”

Alaska faces coastal problems, such as erosion and stronger storms from rising seas and melting ice and concerns about the effects of melting permafrost. “The changes are palpable, and they are significant,” Mallot says.

Mallot expects the leadership team will recommend policies and identify the next steps necessary to strengthen the state’s transition from a fossil fuel-based economy to a renewable energy future. “We have a very small industrial base, so our emissions are a minuscule fraction of the total, but we will identify how we, as communities, as a state and as individuals, can take proactive steps to reduce emissions,” he says.

Alaska’s impact on the climate around the world is less about what it does at home and more about the oil the state sells on the world market. More than a million barrels a day come out of North Slope. Yet Mallot supported the opening of the Arctic National Wildlife Refuge to oil and gas exploration, a position he acknowledges seems at odds with some of the goals he would like to achieve through CAALT.

Mallot speculates the world can continue to use petroleum for at least 25 years at roughly the current levels before it must begin weaning away from it. During that period of time, he says, “for national security purposes, for market purposes, for revenue purposes for our state, [opening ANWR to drilling] makes sense."

The future of the North Slope, he says, will focus on the production of natural gas. Alaska can ship natural gas to China in seven days, he points out, and “the opportunity to take gas to market in China will significantly reduce their emissions. So, we think the opportunities are there, that they are responsible and that we can both move to a future of renewable energy while meeting our fossil fuel energy today."

“We will have goals in the plan we present to the governor to continue to increase the development of renewable energy resources,” Mallot says. “We are a vast land here in Alaska, and we have significant opportunity to do so.”