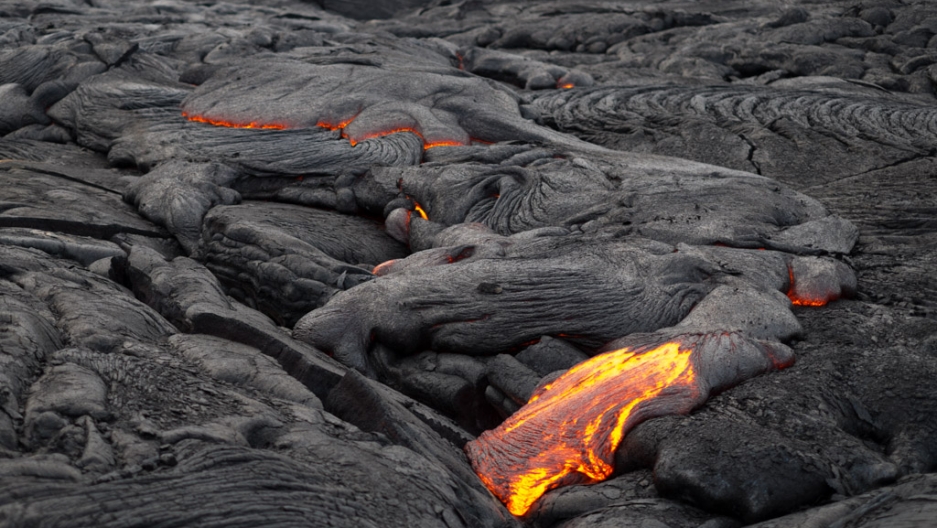 A close-up look at lava flowing out of Hawaii's Kilauea volcano in March 2013.

Can there possibly be an upside to the disaster unfolding in Hawaii, as the Kilauea volcano continues to spew lava and ash? Certainly not right away; but perhaps in the long-term some of that lava might serve a useful purpose.

Basalt, the "bubbly" black rock that is formed when lava cools, has the chemical potential to help take up carbon. So does peridotite, the greenish-black rock formed when magma cools deep in the Earth’s mantle. Magnesium or calcium ions in the rock lock up the carbon dioxide in the form of a stable, solid carbonate — like chalk or the Tums tablet you might pop in your mouth after a rich meal.

Earth scientist Juerg Matter, who led a pilot study that injected carbon dioxide deep into the basalt rock that makes up much of Iceland, says his results are promising.

While the scientific literature and experimental laboratory data have long suggested that mineralization of carbon dioxide takes hundreds or thousands of years to occur, Matter says his project showed that within less than two years, all the CO2 his team injected into the rock was mineralized.

The project is now expanding, with support from several European research institutes, and similar experiments are underway in other parts of the world. The feasibility and cost of this method of capturing and storing carbon are still uncertain. But scientists know one thing for sure: Basalt is ubiquitous. It covers large areas of India, the Pacific Northwest and Iceland. In fact, basalt covers more of the Earth’s surface than any other type of rock.

So, in a twist of fate, there is a chance that someday ancient hot lava might just help our world cool down.

This article is based on a report that aired on PRI's Living on Earth with Steve Curwood.