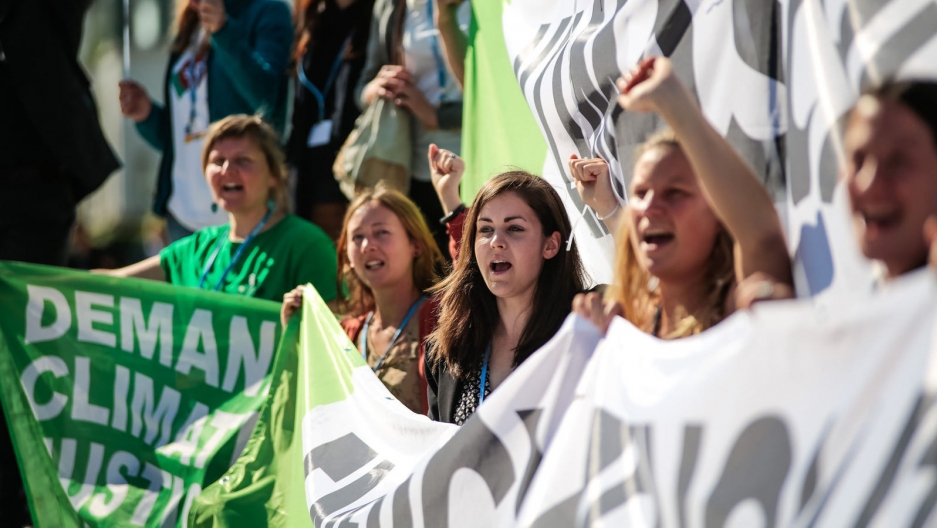 Members of environmental groups hold up banners calling for renewable energy at the United Nations climate talks that took place in Bonn, Germany, in 2015. Bonn was the site of the last United Nations Climate Change Conference in November 2017, in which countries attempted to hammer out the specifics of the Paris Agreement of 2015. Many of the issues went unresolved in Bonn, leaving plenty of questions heading into the next conference in Poland in December.

The upcoming United Nations Climate Change Conference set to take place in Poland is a little more than six months away. The conference — also known as the 24th Conference of the Parties to the United Nations Framework Convention on Climate Change, or COP24 for short — represents the next formal opportunity for the 197 nations to continue to form a plan to go forward with the Paris climate agreement of 2015, created at COP21.

Back in November 2017, diplomats left COP23 in Bonn, Germany, with more questions than answers — and those questions still remain ahead of the proceedings in Katowice, Poland, from Dec. 3-14.

“The mood was workmanlike,” says Alden Meyer, director of the strategy and policy for the Union of Concerned Scientists. “They were trying to reach agreement where they could on particular issues, but they also acknowledge, I think, that they're behind schedule.”

Meyer, who also directs the Washington, DC, office of the UCS, was on hand for the meetings in Bonn. He says an extra week of negotiations has been added to a meeting in Singapore in September to try to make up the difference heading into COP24.

The main goal for the Poland climate summit is to reach an agreement on what is being referred to as the Paris Agreement work program, Meyer says, but its completion currently rests on an unstable foundation of questions, such as what kind of information should countries provide on their nationally determined contributions, what kind of information should they provide to show how well they are living up to the commitments made and how do you get certain countries to further “ratchet up ambition” of those commitments.

“They really came to loggerheads on the issue of what kind of information countries should provide on their nationally determined contributions and should that be differentiated between developed and developing countries or should it be differentiated on the basis of the kind of commitments that countries are making,” says Meyer, who points out that the United States and other developed countries historically have opposed any type of a proposal that has their commitments being much larger than those of developing countries.

Given that the meeting takes place in Poland — a country that prides itself on maintaining coal production — the mindset of the host country remains up in the air as well, Meyer says.

“The real question is, can the presidency of Poland separate itself from the domestic interests of Poland? ... Poland has been resisting efforts within the European Union to increase ambition. They've been fiercely defending their continued use of coal domestically, but as the president of the conference of the parties you need to rise above your national position and try to facilitate agreement on behalf of all the countries attending and I think that's the open question people have,” says Meyer, referencing the COP24 president, Michal Kurtyka, the deputy minister of the Polish energy department.

Committed to the task

On June 1 of last year, US President Donald Trump made a speech in the Rose Garden of the White House in which he said that the US would be pulling out of the Paris Agreement. Last November, Syria signed the agreement, making the US the only country intending to remove itself from the pact.

In spite of this move, Meyer says Trump’s actions have not deterred the climate summit delegates as a whole.

“No one is ratcheting down their commitments. We haven't seen a single country follow President Trump and saying they want to get out of the Paris Agreement,” Meyer said. “We haven't seen a single country saying they're not going to try to meet the commitments they made. Of course, the proof will come a couple of years down the road when it comes time for countries to finally put forward their longer-term targets, so the real question is will countries do more.”

Meyers adds that the other global leaders have become increasingly aware of all of the mayors, governors and business leaders in the US who have sworn to abide by the Paris Agreement — as well as the fact that the US cannot officially leave the agreement until one day after the next presidential election in November 2020.

Meyer says US representatives were still active last year in Bonn, providing significant support in technical negotiations — while facing anger and frustration from other countries in light of Trump’s decision to withdraw.

“[Trump] said [his decision] was subject to whether we could negotiate a better deal and … since then, he has not made clear what such a better deal would look like,” Meyers says. “So, I think that just showed that he really didn't understand what the Paris Agreement was, how it had been negotiated, how flexible it really was and he was just expressing disagreement with it primarily because he thought it was too stringent on the United States and because, frankly, President Obama was the one that helped drive it through.”

The planned withdrawal by the US immediately created a gap in leadership within the climate summit. Meyer says that China has been making moves to fill the part of those shoes by shutting down older coal plants and investing heavily in renewable energy, but it's still financing coal plant expansion efforts in Southeast Asia. The European Union has tried to step up as well, but any progress comes slowly given that it has to reach an agreement among its 28 member states.

“There's no kind of dual pillar like there was between the United States and China driving the Paris Agreement through to completion … back in 2014, 2015. That sort of international leadership has not come together yet, and I think that's one of the real challenges,” he says.

To the pessimistic outsider, the upcoming talks in Poland may just represent another opportunity for international leaders to get together and talk about what has to be done, but not actually get anything done. Meyer says, though, that in spite of the slow pace of the negotiations, breakthroughs are being made as more and more stakeholders have pledged to do their part in the three years since the historic agreement.

“You've achieved a universal engagement on this process and now we have to get it right. We have to mobilize climate finance in a transformational way going beyond just the public finance to really affecting the trillions of dollars that are in play in the private sector,” Meyers says. “There's still work to do but I think you can show how in many cases these negotiations have led to real changes on the ground in countries. It's just not far enough and fast enough. I think that's the frustration that's very legitimate.”