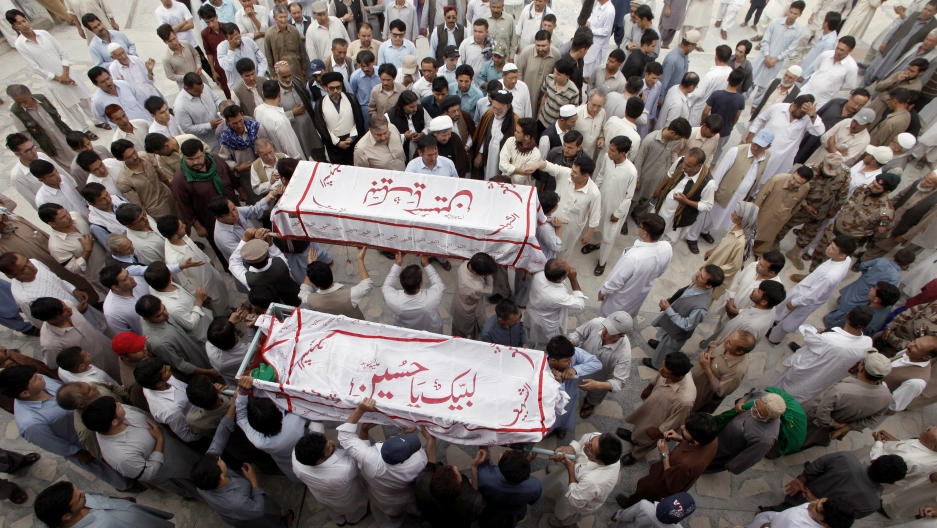 Hazara men carry the coffins of their relatives who were killed after gunmen opened fire on a car during a funeral ceremony in Quetta, Pakistan, July 19, 2017. After years of targeted violence from extremist groups, the Hazara, one of Pakistan’s most persecuted ethnic minority groups, are pressing for justice and accountability.

When Jalila Haider, a Hazara lawyer and human rights activist, returned to her hometown Quetta in southwestern Pakistan last month, her mother thrust a video in front of her.

In it, two Hazara shopkeepers, Jaffar and Muhammad Ali, had been gunned down and family members were wailing around the corpses. In an act that would gain national attention, Haider, gripped by anger, announced a hunger strike on Facebook to protest the wanton killings of Hazaras, a Shiite minority community spread between Pakistan and Afghanistan.

The post marked the beginning of a four-day hunger strike by Haider. She ended the strike when Pakistan’s chief of army staff, General Qamar Javed Bajwa, took the rare step of visiting Quetta personally. The army is widely seen as the primary institution maintaining law and order in Balochistan province, and Hazaras asked the army chief to guarantee the safety of the beleaguered minority.

“My agenda was to break the fear of my community,” Haider says.

'We cannot go outside'

During a Supreme Court hearing this month on the growing violence against Hazaras, Chief Justice Mian Saqib Nisar declared that Hazaras were effectively undergoing “ethnic cleansing” at the hands of extremist groups, and that violence was “wiping out an entire generation.”

“Hazaras have been subjected to heinous crimes, bomb blasts and targeted killings,” says Abdul Khaliq Hazara, chairman of the Hazara Democratic Party. In the past, Sunni militant groups have exhorted followers to wage jihad against Hazaras, promising to make the country their “graveyard.”

The April killings were the fourth attack against the Hazaras in a month, killing six people in total. It underscored the tenuous security afforded to the minority group of half a million, who are largely concentrated in Balochistan’s provincial capital Quetta. Marked by distinctive Central Asian features that can make them easy to identify and target, the Hazara are adherents of Shiite Islam in a predominantly Sunni country. They are regularly attacked by extremists who view them as heretics. More than 2,000 Hazaras have been killed since 2004, according to a report by Pakistan’s National Commission for Human Rights.

“The only question we have is, ‘Where is the state?’” asks Sania Khan, a 19-year-old Hazara student living in Quetta who attended the funeral of one of the killed shopkeepers. “Quetta is very small and there are many checkpoints, but the security still fails.”

Since the 1990s, Hazaras have lived under a state of siege in the restive Balochistan province. This period saw a rise in sectarianism fanned by homegrown terrorist groups that viewed Shiites as apostates, such as the Sunni jihadist group Sipah-e-Sahaba Pakistan, which spawned a virulent offshoot known as Lashkar-e-Jangvi (LeJ) in 1996. In 1999, Hazara education minister Nisar Ali Hazara survived an assassination attempt — the first attack on a prominent Hazara figure in Pakistan. In 2013, twin bombings claimed by LeJ killed more than 180 Hazaras in Quetta, setting off an aggressive securitization of Hazara neighborhoods in the city. Despite the increased number of guards and checkpoints after 2013, Hazaras have continued to be targeted while attending university, taking buses and shopping in markets.

In this environment, many have stopped venturing outside. “We cannot go outside — if we go outside, we will be killed,” says human rights activist Haider. “We are kept in jails.”

Meanwhile, many Hazaras say the state’s own measures to control attacks in Quetta have worsened conditions for those who dwell inside the city’s two heavily secured Hazara enclaves: Hazara Town and Mari Abad. While Hazaras initially embraced the additional security, today residents describe it as asphyxiating the community’s economic and social activities. “It’s not our own city; it’s a camp,” says Khan. 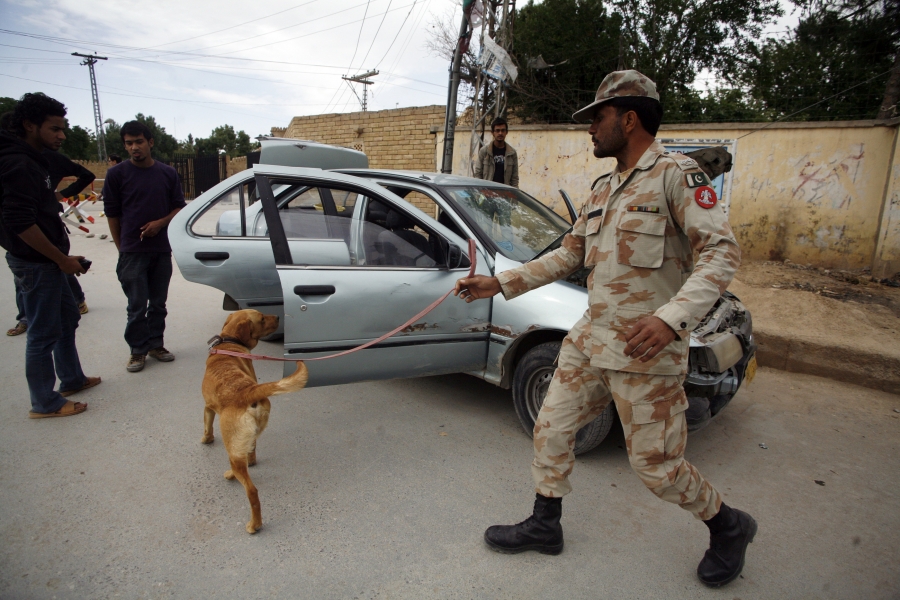 A Pakistani soldier and his sniffer dog search a vehicle at the entrance of a Hazara neighborhood in Quetta, Pakistan, April 28, 2013. Many Hazaras say the security measures put in place to protect them in recent years have failed to prevent attacks, while segregating the community from the rest of the city.

When members of Quetta’s other ethnic groups, such as the Pashtun or Baloch, attempt to enter Hazara neighborhoods, they are interrogated by paramilitary guards at checkpoints and often denied entry. Yasin Nadir, a 26-year-old Hazara from Quetta, says that this tactic only widens the distance between Hazaras and other groups, engendering ill will. “If you don’t let people move from one area to another due to security reasons, [marking outsiders] as a potential threat to the community, that is definitely going to worsen relations," he says. "We want security, but not if it’s putting our relations with other communities at stake.”

Historically, this segregation has also weighed heavily on the community’s economic welfare. A decade ago, Nadir remembers his father was offered a promotion at a bank that required commuting to a non-Hazara part of Quetta. Nadir’s father told his boss that mounting attacks made the option of working outside Hazara enclaves untenable. He chose not to take the promotion.

Other communities implore Hazaras not to accept the risk of setting up businesses in ethnically mixed areas. “When any of us try to open a shop in the main bazaar, they tell us, ‘Better not to open your shop here — you are in danger, better to do your work in your own area,’” says Khan, whose brother operates a tea shop in one of the main marketplaces in Quetta. “When my brother goes out, we do not know if he’s going to come back or not,” she says. “But what should we do? He is the breadwinner.”

'A bazaar of martyrs'

The increasing number of attacks this year have only accentuated this problem. Hazaras have shuttered businesses in Quetta’s main markets after the violence. “Hazaras who do not need to go to the bazaar don’t even move outside the [Hazara neighborhoods] — they stay inside the open-air jail,” Nadir adds.

The violence has even etched itself on the very geography of Hazara localities: The community memorializes its dead on the streets where they are killed. “Our streets are named after martyrs. We even have Shuhada Chowk — ‘the bazaar of martyrs,’” Khan says. When asked if the city’s other ethnic groups are aware of these street names, Khan says Hazaras are alone in using them: “The other communities have not been able to enter our area for years — they don’t know about these streets.”

Although the lockdown of Hazara neighborhoods has been carried out in the name of security, it hasn’t stopped attacks. Crimes against Hazaras have increased in recent years, with most cases going uninvestigated. Targeted killings of Hazara are rarely pursued by courts or the police; fear of retribution means that victims and local authorities alike often do not name perpetrators when first incident reports are filed. In recent years, the police and Frontier Corps paramilitary personnel assigned to protect Hazaras have also been killed by militant groups.

"There is a lack of willingness — and maybe there is a fear — to name the attackers,” says Nadir about the missing names in the paperwork. Witness testimony has also proven surprisingly difficult to produce, as non-Hazara witnesses do not want to entangle themselves in an investigation: “People are afraid; they cannot give testimony,” Nadir says.

Amid this turbulence, Hazara political leaders say that the state must intervene, but not necessarily with more surveillance and securitization of Hazara neighborhoods. Instead, Hazaras have asked for the state to root out militants and ensure security for all.

“The government should take concrete actions and crack down against the terrorists,” says HDP chairman Hazara. “Hazaras must come out of this uncertainty, and it’s upon our government to take responsibility,” he adds.

On May 17, Pakistan’s military seemed to fulfill that request by killing the Balochistan chief of LeJ — an action welcomed by many Hazaras.

Meanwhile, Hazaras have continued to press their case. Haider recently briefed a senate committee and the National Counter Terrorism Authority in Islamabad about the Hazaras’ ongoing security predicament, asking members of Parliament to ameliorate their living conditions, with a special focus on their safety and freedom of movement.

“We are fearless now,” Haider says. “I hope we will see peace in our country.”