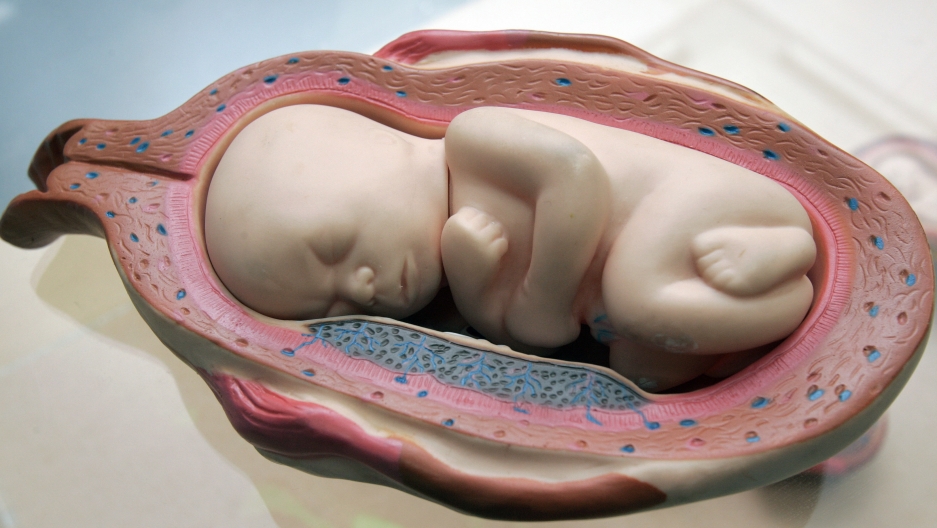 A model of a fetus is displayed at an office of the Korea Pro-Life in Seoul, March 25, 2008. The South Korean government is reviewing the nation’s 1953 abortion ban, which states that women who get an abortion can spend up to a year in prison or be fined up to 2 million won (about $1,850).

While women’s rights and anti-abortion activists in Ireland last week celebrated a new era of legalized abortion, leaders in another country are debating the future of its own laws.

South Korea’s Constitutional Court is reviewing the nation’s 1953 abortion ban, which makes abortion punishable by up to a year in prison or a fine up to 2 million won (about $1,850). And that's for the women. There are even harsher punishments for doctors — up to two years in prison — which is actually why it’s under review in the first place. After being prosecuted for conducting nearly 70 abortions over the course of two years, a South Korean doctor decided to challenge the law, saying it endangers women’s health.

“This isn’t just whether or not you’re going to jail. It’s about how hard it is for women to get a safe abortion and protect their health,” said Ryu Min-hee, core counsel on the case and an attorney at Korean Lawyers for Public Interest and Human Rights. “We hope that the constitutional court of Korea will make the right decision on this, because it’s long overdue.”

These days, any topic related to women’s rights is part of a greater moment in South Korea, a historically patriarchal society with a burgeoning feminist movement. More than 12,000 women marched in Seoul on May 19 to protest police bias against women who report sexual crimes; seas of demonstrators held up #MeToo signs on International Women’s Day in March. Both protests were met with severe criticism online and off, sparking concern about demonstrator safety — one man was even arrested outside of the May police bias rally for threatening to attack women with hydrochloric acid. 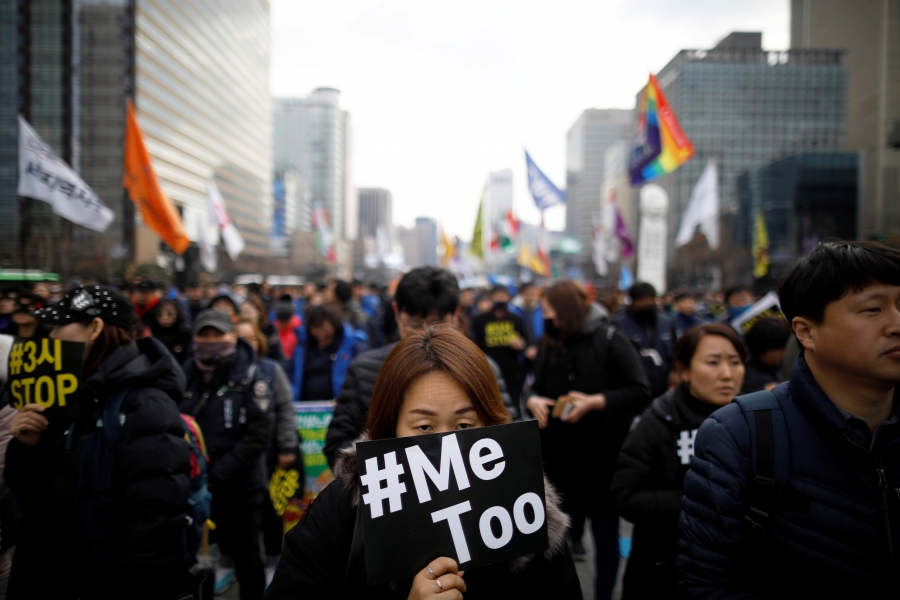 People attend a protest as a part of the #MeToo movement on the International Women's Day in Seoul, South Korea, March 8, 2018

More than 235,000 people signed a Blue House petition last year calling for an end to the abortion ban, but public opinion overall appears to be divided. According to an October 2016 survey of 1,018 people, about 53 percent of South Koreans believe abortion is morally “a kind of murder.” About 73 percent of respondents knew of the abortion ban. The stark anti-abortion sentiment is in a steep decline  — in 1994, 78 percent of people surveyed called it a type of murder. But none of this means the ban will be overturned.

Aside from the usual conservative Christian bloc, some are against abortion because they believe it exacerbates South Korea’s dangerously low birth rate.

Related: Slow to start, Japan is finally having a #MeToo moment

“The idea that it’s going to improve birth rate by forcing women to have babies they don’t want is ludicrous. Research shows that doesn’t work at all. When you ban an abortion, people still have abortions — just unsafe ones,” said Heather Barr, senior researcher on women’s rights for Human Rights Watch. “If I were the South Korean government and I was worried about the aging population, I would be thinking aggressively about how to make people who want children feel like they can afford it.”

“I think it’s actually about being against women’s sexuality and lives — the freedom to choose,” Ryu said. “During our public hearing for the case, the government — they sent me this legal briefing that says, ‘If you have sexual intercourse, you should know there will be some kind of consequence like abortion, and you should be responsible for the consequences.’ We were surprised to hear that argument.”

As it’s written, South Korea’s current abortion law is flawed, ineffective and arbitrarily enforced — which is a problem on both sides of the debate. Illegal abortions are already happening at high rates, for example — an estimated 1 in 5 pregnant women have had one, according to the Korean Women’s Development Institute.

The practice is widespread partly because lawmakers historically turned a blind eye to it. In the 1960s and 1970s, the national government ran numerous “family planning” campaigns in hopes that reducing the population would address post-war poverty. Illegal abortions were fairly commonplace — between 1960 and 2016, the fertility rate dropped from 6.1 children per woman to 1.12. And by 1994, some 45 percent of South Koreans surveyed by Gallup Korea incorrectly thought that the ban didn’t exist.

Related: Will the Year of the Dog mean more babies in South Korea?

“In the 1960s and 1970s, people were actually encouraged to limit their reproductive capacity in various ways,” Ryu said. “They really arbitrarily enforced this criminal provision before, when they felt like we had too much of a population. Now, the government feels we have too little of a population.”

Another issue with the abortion ban: Abortions are only permitted in the case of married women. Women who are eligible for an abortion under one of a limited number exceptions still need their husband's permission.

The 1953 law allows abortion in the case of rape, incest, the possibility of passing on certain hereditary diseases and the possibility that pregnancy can cause serious health conditions for the pregnant female. These circumstances are incredibly rare — 2005 data showed that the exceptions only applied to about 4 percent of the 340,000 abortions performed.

Related: The global reach of 'Our Bodies, Ourselves'

That “doesn’t really make any sense,” Ryu said. Because the law asks for a husband’s permission specifically, it’s unclear whether unmarried women can get approval for abortions.

That makes the law relatively easy for spiteful husbands to abuse. “This clause is actually sometimes misused by the husband to blackmail women after their abortion. We have several cases like that,” Ryu said. 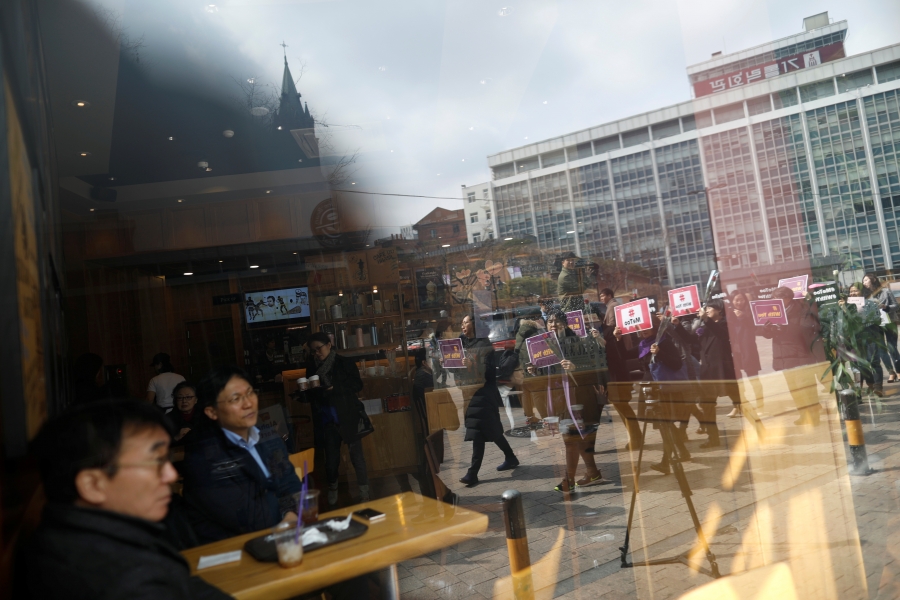 Women marching on a street are reflected on a window of a cafe during a protest as a part of the #MeToo movement on International Women's Day in Seoul, South Korea, March 8, 2018.

When it comes to reproductive rights and family planning, South Korean women are in a particularly difficult spot. Being a single mother is highly stigmatized, as is adoption of those children within the country (many South Korean adoptees end up abroad). Pregnant women who don’t want either outcome may have no choice but to get an underground abortion, which puts them at serious health risk. On the abortion black market, records are hardly ever kept and doctors are immune to legal consequences from a botched procedure.

“The complications of a bad abortion include death. Hemorrhaging — a lot of things can happen,” Barr said. “There’s no safe way to have an illegal abortion. It’s a serious medical procedure that needs to be performed by competent, trained professionals.”

Even if abortions are legalized, it will take some time for South Korea’s medical community to catch up.

Related: This Haitian comedian revealed her trauma and became a voice for #MeToo

“Doctors cannot get any proper education at medical school because legal abortion is so narrow, and they don’t get that experience during their internships or their residency,” Ryu said. “When you live in a rural area and you are underage, it’s hard for you to find a doctor that is willing to perform the operation.”

She added that women in rural areas are likely charged more for illegal abortions. In general, fees for underground abortions can be as high as 5 million won (about $4,620), according to an expert witness in the case. In comparison, abortions in the US can range from a few hundred dollars to as much as about $3,000.

For now, advocates for legal abortion are forced to wait. There’s no telling how quickly the Constitutional Court will reach a decision, nor is there a deadline for a verdict. But in a time when public opinion is rapidly shifting in favor of women’s equality and women’s rights, it’s certainly possible that 2018 will be a year of change in South Korea.

“I honestly can’t predict [an outcome]. I can only hope,” Ryu said. “I see a lot of opinions supportive of abortion from the public. They understand that it’s about women’s autonomy and their choices about their lives.”