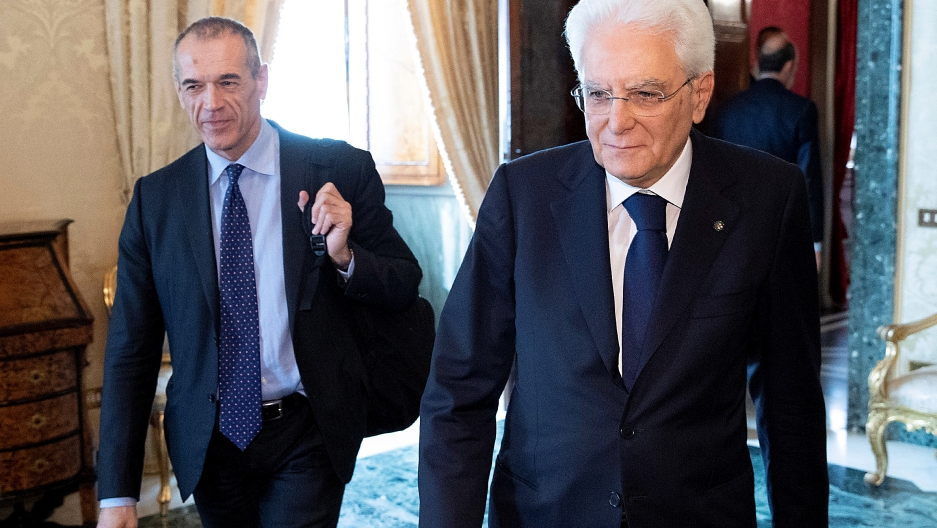 After weeks of negotiations, an agreement had been signed by Five Star Movement and the hard-right party Lega — two anti-establishment parties that came first and third respectively in Italy’s national elections in March. Their candidate for prime minister, Giuseppe Conte, had been approved. Then at the last moment Italian President Sergio Mattarella — who holds a largely ceremonial role as head of state — torpedoed the whole deal.

Specifically, the president rejected Paolo Savona, the parties’ choice of finance minister. Savona has been labeled a euroskeptic, who once called Italy’s adoption of the Euro a “historic mistake.” The Italian president said such a candidate for finance minister “posed a risk for Italian families and citizens, because it created uncertainty in the Italian economy.”

Critics say President Mattarella has breached the limits of his power and provoked a constitutional crisis. Five Star leader Luigi di Maio even called for the president to be impeached. 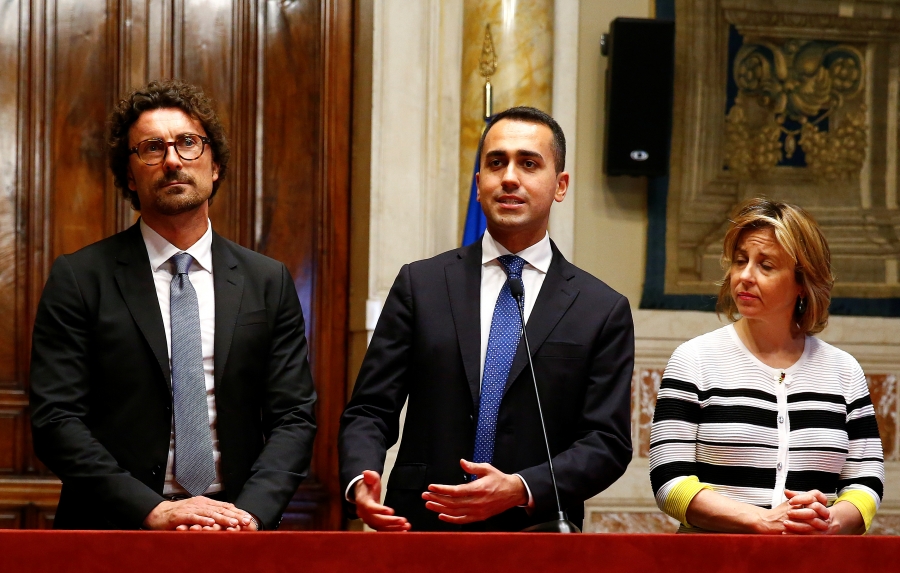 Anti-establishment Five Star Movement leader Luigi Di Maio speaks to the media after a round of consultations with Italy's newly appointed Prime Minister Giuseppe Conte at the Lower House in Rome, Italy, May 24, 2018.

On Monday, Mattarella appointed an interim prime minister, Carlo Cottarelli, and asked him to form a caretaker government. But it's unlikely Cottarelli could win a vote of confidence in parliament, plunging Italy into further chaos — one that’s rattling the global markets.

As a result, new parliamentary elections could be called as early as July, in which the anti-establishment parties — especially Lega — are projected to increase their share of the vote. Which begs the question: Did the Italian establishment go too far in its bid to stop the populists from taking Rome?

“I’m really disappointed,” says Michele Sodano, a newly elected Five Star Movement deputy. (Similar to the US Congress, Italy’s parliament consists of a lower house, the chamber of deputies, and an upper house of senators.) “We did our best for the last 80 days to create a common plan with Lega that would really make a change to people’s lives. I never imagined that this fantastic democratic process could just be stopped like that by Mattarella,” adds Sodano.

Five Star politicians and supporters believe that Mattarella’s veto wasn’t really about the choice of finance minister, the 82-year-old Paolo Savona. They claim that President Mattarella used this as a pretext for adhering to the will of the European establishment, which could not handle a euroskeptic in such an important ministry.

Sodano argues that the ratings agencies and spooked markets have trumped the democratic will of millions of Italians. “Which is not right,” he says. “The curious thing is that within 30 minutes [of vetoing the Five Star–Lega government], the president already had a name for a new prime minister, Mr. Cottarelli. Maybe this was already planned.”

Five Star has contested the idea that the proposed government was somehow a threat to EU membership. “The message was that this government was anti-European — but that is totally fake. We even wrote it in the contract, that we believe in Europe, we believe in the community of European countries,” although Sodano adds that the EU must work more for Italians who are struggling. EU-led austerity is deepening inequality and taking away “even the basic rights” from people, he says, by blocking Italians’ choice of government.

While the populists cry foul, supporters of President Mattarella’s move argue he had little choice.

“There is a lot of confusion over why Mattarella chose to veto Paolo Savona as finance minister,” says Alberto Alemanno, who ran in Italy’s March elections with the pro-EU party More Europe, and is a professor of EU law at HEC Paris. Alemanno explains that there was “no clear electoral mandate” for having a euroskeptic in the finance ministry, as neither Five Star nor Lega had explicitly campaigned on an anti-Euro ticket.

Stubbornness on the side of the populists also played a part in the collapse of the government’s formation. President Mattarella asked for an alternative finance minister; Lega in particular refused to budge. “This was the fruit of the strategy of Lega, which wanted the clash, because this further emboldens their base,” Alemanno says. “This is very irresponsible, but also very effective from an electoral standpoint.”

Lega will be able to use the showdown with the president to its advantage, Alemanno believes.

“You see what is the cost of lack of experience?” asks Gianluca Sgueo, professor of media, activism and democracy at New York University in Florence, and a policy analyst in the EU parliament. “Salvini has scored a great victory here,” he adds (Matteo Salvini is Lega’s leader). “First, he made the failure of the [proposed new government] look like it wasn’t his fault. Second, he has made Five Star revolt against the president of the republic, which is one of the Italians’ most beloved institutions. ... And now Five Star looks like children who’ve been denied more gelato.”

Despite Five Star’s claims, there are precedents for the president rejecting a prime minister’s choice of minister. In the past, former Prime Minister Silvio Berlusconi had choices of ministers refused by the president, including once when he proposed his personal lawyer as the minister of justice. 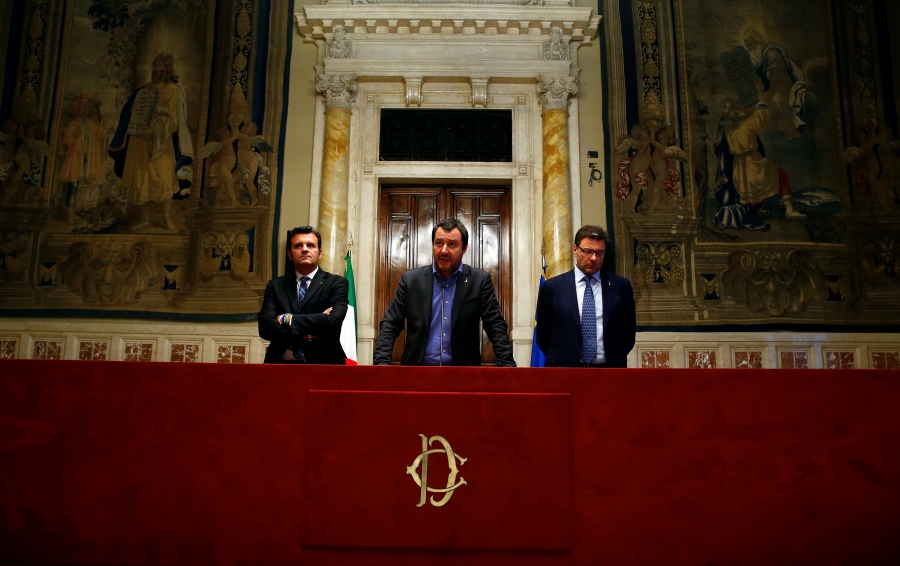 Lega party leader Matteo Salvini speaks at the media after a round of consultations with Italy's newly appointed Prime Minister Giuseppe Conte at the Lower House in Rome, Italy, May 24, 2018.

Sgueo is not alone in thinking Five Star has been played by Lega, which has served before in government coalitions under Berlusconi. Major Italian newspapers have depicted Five Star’s leader Luigi Di Maio as the apprentice humiliated by his master, Lega’s Matteo Salvini. “If this wasn’t being played out over my skin and that of the Italian people, I would reach for the popcorn and just watch. It’s better than House of Cards,” says Sgueo.

Matteo Salvini is unlikely to admit that he deliberately sabotaged the formation of a new government for political gain. But the Lega leader has already distanced himself from Five Star’s calls for the impeachment of the president. Instead, he is pushing for fresh parliamentary elections, in which Lega is likely to do well — perhaps what he wanted all along. Lega's support has leapt in opinion polls by about 10 points to 27.5 percent since the elections in March. That puts the party just behind Five Star Movement, currently Italy’s most supported party, which has dropped about 3 points to a 29.5 percent share.

“I'm happy that the government didn’t start, because I fear Salvini,” says Five Star supporter Giorgio, 43, from Rome. “But I think, to be honest, that Mattarella was wrong, because he made a political choice, and in that way has helped anti-establishment parties.”

Only a quarter of Italians think President Mattarella made the right decision. Giorgio adds: “I don’t know if I'm going to vote again for Five Star again.”

Lega may get its wish for early elections. President Mattarella’s proposed caretaker government does not have much hope of even surviving in the interim, and a snap election could be held as soon as July. Whatever Lega’s real intentions during negotiations with Five Star, Salvini’s party will have succeeded in making the euro a big issue when new elections are called. As Alberto Alemanno says: “It will be a referendum on euro-exit.”