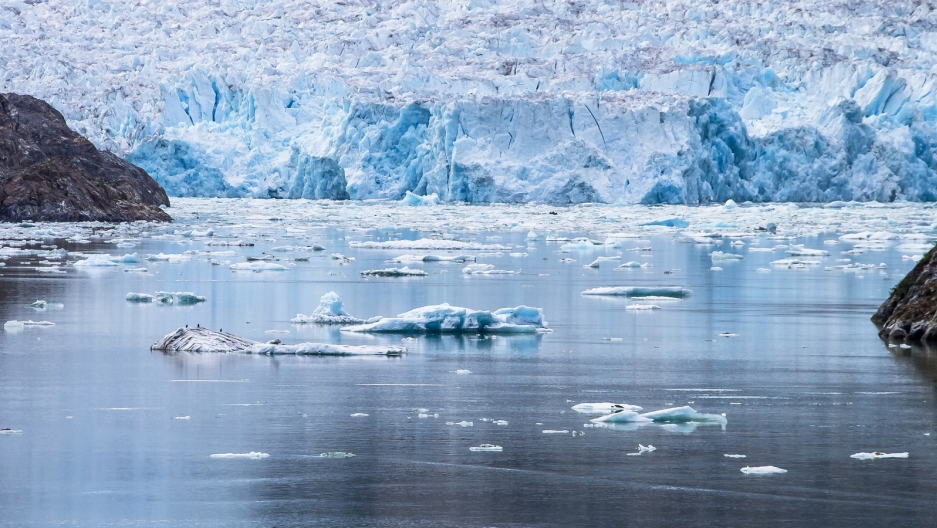 Bits of icebergs can be seen that have broken off the Sawyer Glacier in Alaska, where the effects of climate change are being felt at a higher rate than in the Lower 48.

Nowhere in the United States has been experiencing the impacts of climate change in a more rapid fashion than Alaska where a steep rise in temperatures has been melting permafrost and causing sea levels to rise.

Last fall, a group of 16 Alaska youth decided to sue their home state through a non profit called Our Children’s Trust, claiming their fundamental human rights are being threatened by climate change.

“There is language in the [Alaskan] Constitution that suggests that everyone in the state has a right to life, liberty, property, and that has been interpreted by the Alaska Supreme Court to include a healthy environment,” says Pat Parenteau. “The Constitution doesn't use those words, but they've been implied as unenumerated rights. The court in Alaska hasn't fleshed out exactly what that means and what obligations it might impose on, for example, the government.”

Parenteau is a professor at Vermont Law School. He has been keeping track of a growing trend — both in the US and in other nations — where young people are suing their national or state governments over a collective failure to address climate change's effects on children's future.

Most recently, a group of young people in Colombia earned a victory when the Colombian Supreme Court declared personhood for the Amazonian rainforest inside the country — and demanded the government come up with a plan for its safety within 48 hours of the ruling.

The Alaska case is Sinnok v. the state of Alaska. The 16 plaintiffs represent regions across the state, but the lead plaintiff is Esau Sinnok, who lives in the village of Shishmaref, which has suffered extreme erosion over the years. Shishmaref residents actually voted to relocate the town completely in 2016 because of the impact.

The plaintiffs, Parenteau says, are asking for a “science-based plan of attack” that is centered on reducing greenhouse gas emissions in Alaska — and a reduction of the greenhouse gases that Alaska is responsible for emitting into the atmosphere.

Instead of denying that climate change is happening, the case’s defendants — including the governor and state legislature — have gone on record saying that there is a need to reduce emissions. They have also said, though, that the state is essentially in a tough spot, given that oil and gas are the state's only major exports.

“The argument that the state is making is not that the science doesn't require action, but that Alaska is in a very difficult position and would have to be sacrificing income and culture and health care and on and on, a lot of social services, if it were to suddenly or dramatically begin curtailing the one major product that it can export,” Parenteau says.

The state’s lifeblood has been composed of oil and gas, he adds, causing many of Alaska’s elected officials to look to expansion into previously untouched fossil fuel reserves, such as in the Arctic National Wildlife Refuge.

“So, you have a juxtaposition here of a state that's suffering, probably what you’d call disproportionate impacts from climate change at the same time they're accelerating the development of the fuels that are going to exacerbate those very impacts,” Parenteau says.

“But the question for the court is going to be, all of that being true, what's the role of the court in ordering the government to take action as opposed to waiting for the legislative and executive branches of the government to actually start the process, at least, of taking action?”

Looking for a landmark

As Parenteau points out, this is the second attempt at such a lawsuit. The first one was dismissed in 2014. The Alaskan Supreme Court directed the plaintiffs to seek relief from state agencies — but no action was taken.

“So, that's what the plaintiffs have said, ‘We tried the other route. The political route — it didn't work. Things are getting worse. We need relief,’” Parenteau says.

The Alaska case joins a long line of similar cases in other states. The movement, though, is still looking for a seminal court decision that could possibly create a type of legislative sea change.

“It's trying to find a breakthrough case where you can find a state supreme court willing to make a really bold decision finding not only a right to a healthy environment, or a safe climate, stable climate, but also finding a duty on the part of the government to take real tangible action to address that,” Parenteau says.

Although oil and gas operations have yet to be halted as a resulted of these cases, Parenteau says significance may be found in a related breakthrough case in April in which the Pennsylvania Supreme Court declared that people have a right to contest and block fracking operations when it comes to companies trying to extract natural gas below the property of landowners.

“The Pennsylvania Supreme Court,” Parenteau says, “has put down a very strong marker that there could be a limit to how far you can go pushing extraction of fossil fuels that are causing these various kinds of impacts.”

This article is based off an interview  that aired on PRI’s Living on Earth with Steve Curwood.