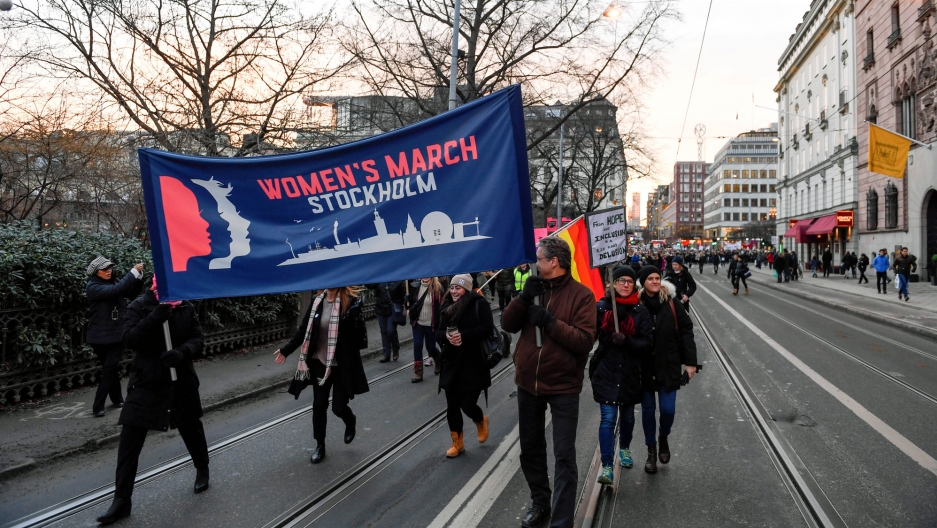 Protesters carrying banners and placards take part in a Women's March in Stockholm, Sweden, on Jan. 21, 2017.

As Sweden joins 10 other western European countries with a new consent law, there’s still much to figure out about what happens next.

The new law was passed Wednesday by an overwhelming majority (257 to 38, with 54 absentees) in the country’s parliament. Still, the two biggest opposition parties, The Moderate Party and the Sweden Democrats, are skeptical.

The law specifies that “sex must be voluntary” to be legal. Previous laws had defined sexual assault more narrowly, requiring that violence, coercion, or incapacitation on the part of the victim have come into play in order for a sexual encounter to be considered rape.

“It won’t lead to more convictions,” said Helena Bouveng, Moderate Party member of parliament. “Usually there’s only the victim and the perpetrator present [during the incident], which makes it hard to produce evidence.”

The Swedish Council on Legislation said that the new law is likely to conflict with existing criminal law because it doesn’t meet the requirements for “predictability,” meaning that the law does not provide enough concrete parameters defining what specifically constitutes a rape. It also questioned the need for a consent law, because parts of it were covered by existing regulation.

Similar criticism has been voiced on Twitter, where some worry about what consent will mean in practice.

Others worry that the new law violates the right to be presumed innocent until proven guilty.

“[The consent law] creates more problems than it solves,” said Jeanette Widen, a political secretary for the Moderate Party, who lives in Stockholm.

“Consent law means turning the tables. Instead of the girl proving she said no, the guy has to prove that she said yes,” says 25-year-old Daniel Johansson, who lives in Stockholm. “This will allow any woman to accuse a guy for rape and he must prove the opposite if he does not want to be convicted.”
Johansson said that a better way to reduce rape is to “give the police more resources,” and “much harsher sentences for rapists.”

Prior to the new law, those convicted of rape in Sweden faced between four and 10 years in prison. The new law increases the minimum sentence for first degree rape to five years. But the Moderate Party says it’s not enough.

“Eighty-five percent of reported rapes are not of the first degree,” Bouveng said. “We need harsher laws for first and second degree rape to send the signal that it’s not OK.”

Joel Johansson, 22, who lives in Skogaholm, asked, “Who will prove whether or not consent has occurred?”

But the law is mostly seen as a move in the right direction, especially among young people. A 2017 poll showed that 75 percent of Swedes between the ages of 18 and 29 were in favor.

“It’s positive to have a law on consent, although in practice I believe that producing evidence in sexual offense cases will face the same challenges [as before],” said Nathalie Ljustermo, a law student at Stockholm University. “There seems to be an overall positive and open support for the law on campus, but I also know that even supporters are skeptical of its legal effectiveness as well as the reversed burden of proof.”

A similar affirmative consent bill failed to pass in the Norwegian parliament last month, largely due to concerns similar to those being raised in Sweden.

Demands for a law of consent have been voiced throughout the last decade following a number of rape cases where the accused was acquitted. In January 2014, a 27-year-old man from the city of Lund was acquitted of rape charges despite the victim having said “no” and “stop.”

In September 2013, the appellate court freed six teenage boys who were initially sentenced to juvenile prison for raping a 15-year-old girl. According to the district court, the six boys had taken turns having sex with the girl in a locked room in Tensta, Stockholm.

The government began considering a consent law as early as 2010, but instead chose to broaden the sexual offense legislation to include cases where victims were in a "particularly vulnerable situation.”

The new law introduced two crimes to account for the broader definition of rape: negligent rape and negligent sexual assault. These cover situations where one party continues sexual intercourse without consent, but where there is no coercion, threat or incapacitation on the part of the victim. The maximum penalty for either conviction is four years in prison.

Still, many are hopeful the consent law will help send a clear message to the public and encourage men to change or re-examine their behavior. As Nils Karlsson, a member of Sweden’s Green Party and a local government official, tweeted, “If your sex life is threatened by consent law, you probably shouldn’t have one.”