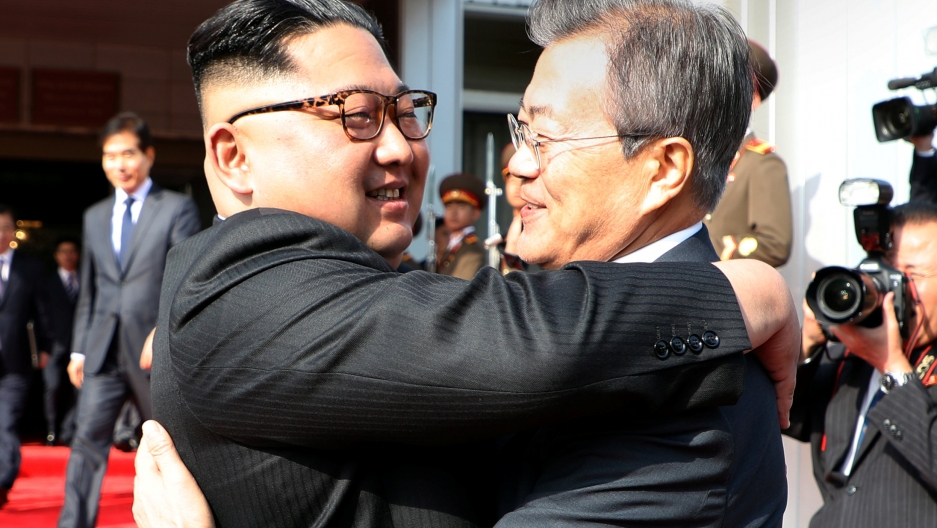 South Korean President Moon Jae-in bids farewell to North Korean leader Kim Jong-un as he leaves after their summit at the truce village of Panmunjom, North Korea, in this handout picture provided by the Presidential Blue House on May 26, 2018.

Courtesy of The Presidential Blue House

It was the clearest sign yet that the on-again off-again summit between Trump and Kim is likely to be held as initially agreed, in Singapore on June 12.

The unannounced meeting at the Panmunjom border village between Moon and Kim came a month after they held the first inter-Korean summit in more than a decade at the same venue and declared they would toward a nuclear-free Korean peninsula.

"The two leaders candidly exchanged views about making the North Korea-US summit a successful one and about implementing the Panmunjom Declaration," South Korea's presidential spokesman said in a statement.

Moon, who returned to Seoul earlier this week after a meeting with Trump, will announce details of the meeting with Kim on Sunday morning.

Trump said on Friday that Washington was having "productive talks" with Pyongyang about reinstating the June 12 meeting, just a day after cancelling it.

Politico magazine reported that an advance team of 30 White House and State Department officials was preparing to leave for Singapore later this weekend.

Reuters reported earlier this week the team was scheduled to discuss the agenda and logistics for the summit with North Korean officials. The delegation was to include White House Deputy Chief of Staff Joseph Hagin and deputy national security adviser Mira Ricardel, U.S. officials said, speaking on condition of anonymity.

Trump said in a Twitter post late on Friday: "We are having very productive talks about reinstating the Summit which, if it does happen, will likely remain in Singapore on the same date, June 12th., and, if necessary, will be extended beyond that date."

Trump had earlier indicated the summit could be salvaged after welcoming a conciliatory statement from North Korea saying it remained open to talks.

"It was a very nice statement they put out," Trump told reporters at the White House. "We'll see what happens — it could even be the 12th."

"We're talking to them now. They very much want to do it. We'd like to do it," he said.

After years of tension over Pyongyang's nuclear weapons program, Kim and Trump agreed this month to hold what would be the first meeting between a serving U.S. president and a North Korean leader. The plan followed months of war threats and insults between the leaders over North Korea's development of missiles capable of reaching the United States.

Trump scrapped the meeting in a letter to Kim on Thursday after repeated threats by North Korea to pull out over what it saw as confrontational remarks by U.S. officials demanding unilateral disarmament. Trump cited North Korean hostility in cancelling the summit.

In Pyongyang, North Korean Vice Foreign Minister Kim Kye Gwan said North Korea's criticisms had been a reaction to American rhetoric and that current antagonism showed "the urgent necessity" for the summit.

He said North Korea regretted Trump's decision to cancel and remained open to resolving issues "regardless of ways, at any time."

Kim Kye Gwan said North Korea had appreciated Trump having made the bold decision to work toward a summit.

"We even inwardly hoped that what is called 'Trump formula' would help clear both sides of their worries and comply with the requirements of our side and would be a wise way of substantial effect for settling the issue," he said.

North Korea also went ahead with a plan to destroy its only known nuclear site on Thursday, the most concrete action yet since pledging to cease all nuclear and long-range missile tests last month.

Dozens of international journalists left North Korea on Saturday after observing the demolition of the underground tunnels in Punggye-ri, where all of the North's six nuclear tests were conducted including its latest and largest in September.

Trump's latest about-face sent officials scrambling in Washington. Defense Secretary Jim Mattis told reporters diplomats were "still at work" and said Trump had just sent a note out on the summit, which could be back on "if our diplomats can pull it off."

US State Department spokeswoman Katina Adams declined to give details of any diplomatic contacts but said: "As the president said in his letter to Chairman Kim, dialogue between the two is the only dialogue that matters. If North Korea is serious, then we look forward to hearing from them at the highest levels."

White House spokeswoman Sarah Sanders told reporters Trump did not want a meeting that was "just a political stunt."

"He wants to get something that's a long-lasting and an actual real solution. And if they are ready to do that then ... we're certainly ready to have those conversations," she said.