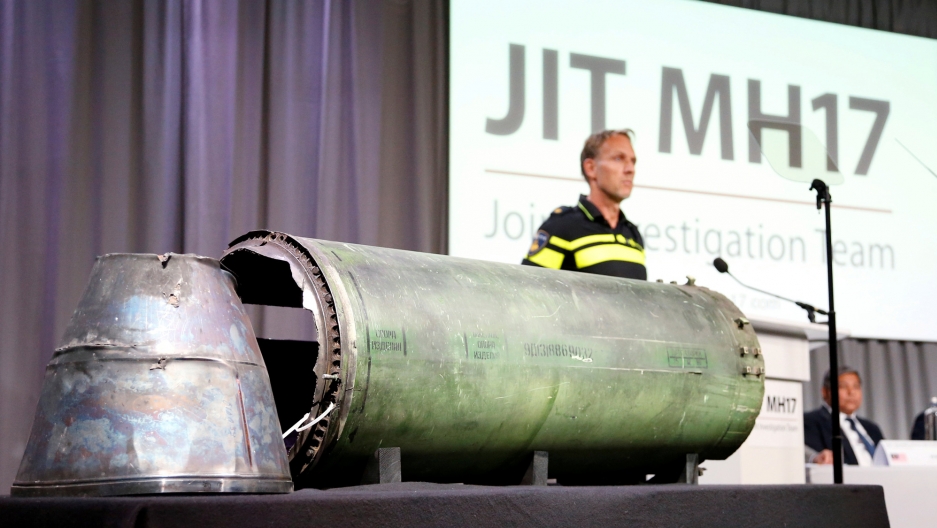 A damaged missile is displayed during a news conference held on May 24, 2018 in Bunnik, Netherlands, by members of the Joint Investigation Team, comprising the authorities from Australia, Belgium, Malaysia, the Netherlands and Ukraine who present interim results in the ongoing investigation of the 2014 MH17 crash that killed 298 people over eastern Ukraine.

The Netherlands and Australia said on Friday they held the Russian state responsible in part for the downing of Malaysia Airlines Flight 17 in July 2014 that killed all 298 aboard, and will seek compensation.

MH17 was shot down over territory held by pro-Russian separatist forces in eastern Ukraine in 2014 as it flew from Amsterdam en route to Kuala Lumpur. Victims were from 10 nations and included 193 Dutch and 28 Australian citizens.

Dutch Foreign Minister Stef Blok said a possible next step would be presenting the case to an international court, though first the Netherlands and Australia would seek a more substantial reaction from Moscow.

Related: Dutch investigators will reveal what happened to MH17 — but not who shot it down

"It has now been indisputably proven that there is a direct link between the rocket that hit MH17 and the Russian army," Blok told a news conference in The Hague.

"We call on Russia to accept its responsibility and cooperate fully with the process to establish the truth and achieve justice for the victims of Flight MH17," he said.

Russia has always denied any involvement, and said on Thursday none of its missile launchers had ever entered Ukraine — despite photographic evidence presented by prosecutors.

Related: When flight MH17 went down in Ukraine, one sister died and another's life was altered forever

Blok said he had spoken by telephone on Friday with his Russian counterpart Sergei Lavrov. He described Lavrov as "standoffish" and said Lavrov had repeated that Russia was not responsible.

Kremlin spokesman Dmitry Peskov told reporters on a conference call on Friday that Russia had not been a fully-fledged participant in the Dutch investigation and could not therefore trust its findings. When asked if the Kremlin denied allegations of Russian involvement, he said: "Absolutely."

The United States on Friday joined calls for Russia to account for its role in the crash.

"It is time for Russia to acknowledge its role in the shooting down of MH-17 and to cease its callous disinformation campaign," U.S. State Department spokeswoman Heather Nauert said in a statement that blamed Russian aggression in Ukraine for more than 10,300 deaths.

The Dutch cabinet made its announcement a day after an interim report by prosecutors investigating the plane's destruction said the Buk missile that shot it down came from a launcher in Russia's 53rd Anti-Aircraft Brigade.

"Russia has not cooperated at all (with the criminal investigation), Blok said.

He said the Netherlands and Australia would seek financial damages "but also compensation in form of cooperation."

Blok said that attempts to hold Russia responsible for the plane's downing under international law would be a different, parallel process from the ongoing investigation by prosecutors seeking to establish individual criminal responsibility.