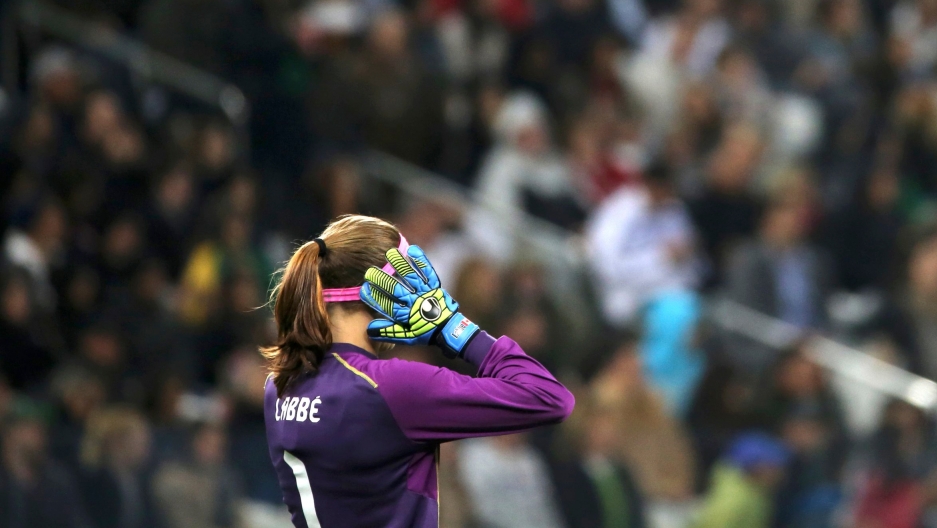 Goalkeeper Stephanie Labbe of Canada in a match against France at the 2016 Rio Olympics.

Stephanie Labbé played on the biggest stage in the soccer world: the Olympics.

She won a bronze medal two years ago in Rio as the starting goalie for Canada's national women's team. Now, she wants to add to her list of accomplishments by planning for the Calgary Foothills men's soccer team.

Despite qualifying, the Premier Development League, which oversees the Foothills won't allow Labbé to play because of her gender. Labbé recently told The World's Marco Werman about her disappointment.

Stephanie Labbé: Well ... I wanted to challenge myself and put myself in an environment where I would be pushed every day and be challenged to my limits. And I've trained with men in the off-season before, so I knew how much of a challenge it is and how much it pushes me and how much it helps my development in a whole new way.

Marco Werman: Only, to be told by the league that you can't play on the men's team. Was that a surprise to you?

The Calgary Foothills, have both a men's team and a women's team. They call their women's team Canada's highest level women's club team. Why not play with that squad?

Do you think there's any chance the league will change its mind?

Of course I'm very hopeful, but the way that the league has responded — and by responded I mean lack of responding to anything further than the initial conversation — I don't have any beliefs that it's going to change.

I gather that there are numerous petitions circulating asking for you to be on the team. So could the pressure make a change?

That would be amazing if it could — yeah, the support has been incredible and the amount of people that have reached out from all walks of life has been pretty overwhelming and humbling. But, at the end of the day, I think that they have their opinion and their role and they're pretty set on it.

I was impressed by Canada's women's team in the women's World Cup. Why doesn't the country have a professional women's soccer league?

It's growing. Soccer has really come onto the stage in the past six years since the London Olympics, especially with the new men's professional league that's going to be starting up next year. And now, hopefully, moving forward, we'll likely add some women's teams to that because — to have the opportunity to stay at home to play professionally in front of our friends and family would be amazing. Plus it would just start developing more and more female players here in our country.

What's next for you?

I'm still training full time with the men's team here. It's a great environment and I'm improving every single day ... and I'm in contact with a couple of clubs over in Europe so hopefully, sign and head over there in July.

Women's team. I think that there's a reason why we have women's leagues and that's because there is a clear fact that men have a genetic biological advantage in sports. The way that men are built, their muscles — everything — they have a genetic advantage and that's why we've created women's leagues so that women have an equal and fair opportunity. So I am all for all women's leagues. But for me, if I'm able to overcome those genetic differences and prove that, technically, I'm able to keep up, then that's when I think there could be an exception.

And my ability is good enough.