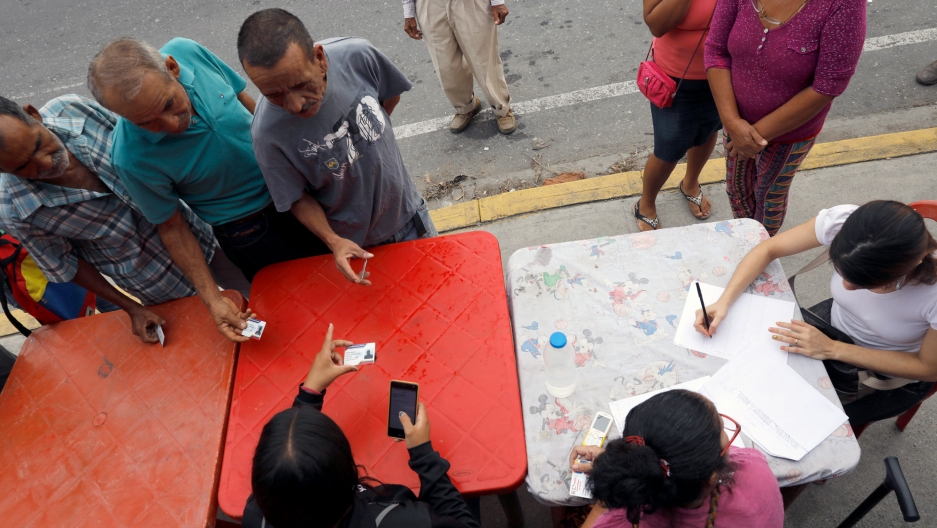 Venezuelan citizens check in at a "Red Point," an area set up by President Nicolas Maduro's party, to verify that they cast their votes during the presidential election in Caracas, Venezuela, May 20, 2018.

Venezuelan President Nicolas Maduro was seeking a six-year term on Sunday in a vote condemned by foes as the "coronation" of a dictator and likely to bring fresh foreign sanctions.

With the mainstream opposition boycotting the election, two of his most popular rivals barred from standing and state institutions in loyalists' hands, the 55-year-old former bus driver is expected to win despite his unpopularity.

That could trigger oil sanctions from the US government, and more censure from the European Union and Latin America.

The self-described "son" of Hugo Chavez says he is battling an "imperialist" plot to crush socialism and take over the OPEC nation's oil wealth. But opponents say the leftist leader has destroyed Venezuela's once-wealthy economy and ruthlessly crushed dissent.

Maduro's main challenger is former state governor Henri Falcon, who predicts an upset on the back of some polls showing him ahead and widespread fury among Venezuela's 30 million people at the collapse of their economy.

"The day has come to make history and save Venezuela," Falcon, 56, tweeted early on Sunday, urging Venezuelans to vote. During his campaign, he scattered fake $100 bills to symbolize his proposal for replacing the collapsed bolivar currency.

Most analysts believe, however, that Falcon has only a slim chance given anticipated abstention, the opposition split over his break with the boycott, the vote-winning power of state handouts, and Maduro's allies on the election board.

"These are not elections. They are a farce intended to keep Maduro in power without popular support," said Juan Pablo Guanipa, of the main opposition coalition, which is boycotting the vote.

Further hurting Falcon's chances by splitting the anti-Maduro vote is a third candidate, evangelical pastor Javier Bertucci, who has picked up quite a following on the campaign trail, not least thanks to his free soup handouts.

Related: In Venezuela, even an economist can't afford to fill her shopping cart

On the streets, many Venezuelans are disillusioned and angry over the election: They criticize Maduro for economic hardships and the opposition for its dysfunctional splits.

Reeling from a fifth year of recession, falling oil production and US sanctions blocking new debt issues, Venezuela is seeing growing levels of malnutrition and hunger, hyperinflation, and mass emigration.

"I'm telling the world: Stop your aggressive campaign against Venezuela," Maduro said early on Sunday morning as he voted, blaming opponents for the country's mess but giving no specifics of possible reforms to nearly two decades of state-led economic policies.

Given Venezuelans' despondency over the crisis, campaign rallies have been poorly attended compared with previous votes and the atmosphere has been the most lackluster in memory. There was low attendance at polling stations in wealthier, pro-opposition eastern Caracas on Sunday morning.

Pro-boycott activists were planning some scattered protests on Sunday, but authorities deployed 300,000 soldiers and policemen around the nation to protect voting stations.

Results are expected by late evening.

"I'm not voting. No one trusts the politicians. Both sides are useless, government and opposition," said bank worker Jhonny Castro, 36, in central Barquisimeto city.

"People are resigned, you hardly see any election publicity. I ask around at work and among my friends, and for every five people, three or four won't vote."

Should Maduro win, he may choose to use the domestic political advantage to deepen a successful purge of critics within the ruling "Chavismo" movement.

Various high-profile figures, including former ministers under both him and Chavez, are in exile or jail.

Abroad, Maduro is likely to face an avalanche of western protests should he win, although Russia and China remain big allies and have been important financial backers.

With oil output at a 30-year low, foreign debtors looking to up the pressure, and multinationals departing or minimizing operations in Venezuela, Maduro will face a Herculean task to turn around the moribund economy.