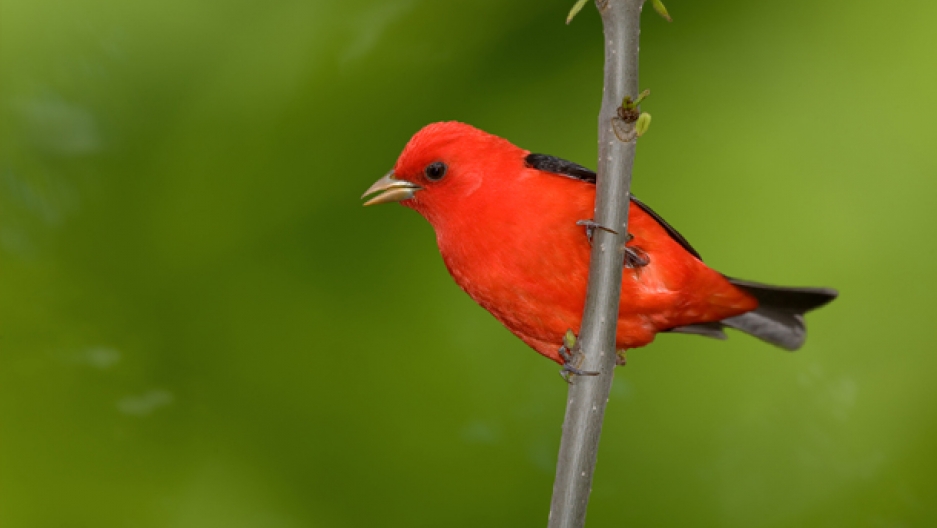 The scarlet tanager migrates across the Gulf of Mexico each year.

April 2018 was the coldest and snowiest April on record for much of North America. That spelled trouble for migrating birds who arrived in the north expecting to bulk up on the spring emergence of bugs — and often found two feet of snow instead.

The extreme weather also worries bird experts like Andrew Farnsworth, a research associate at the Cornell Lab of Ornithology. One bad season can take a terrible toll on bird populations, he says.

“It may be, perhaps, that if conditions are not so horrible, birds are able to bounce back,” he explains. “Perhaps it just means a slight decrease in productivity — maybe not all individuals are able to produce young that year. But in severe cases like this year, where the cold and snow are pervasive, that could be a major hit to the population.”

Something about the timing of bird migration is genetic, Farnsworth says, and is connected with the emergence of insects in the spring. Getting the timing right has a direct connection to a bird’s survival and success.

“An individual bird arriving to someplace where there are black flies everywhere can produce a lot of young,” Farnsworth explains. And “it’s going to be able to take advantage, in theory, of that same flush of insects, assuming it happens at the same time every year.”

If this timing starts to shift because of an extremely cold winter, then birds could face a potentially serious problem. The converse can be true, too.

“If it's an extremely warm spring and the insects come out early before you arrive, maybe you're in trouble because all of the earlier arriving birds get the better territories,” Farnsworth says. “They produce more offspring, and then that earlier arrival timing is something that is part of the gene pool, so to speak.”

The size of its population can indicate how well a particular bird species can adapt to changes in weather conditions. If the population is large enough to have significant variation in the timing of its arrival, it will likely do better.

For some species, this is still the case, Farnsworth says, although “given all the other kinds of injuries to bird populations, in particular migrant populations, overall populations are declining, so that variability is declining too. When you have that kind of a situation, along with rapid fluctuations in climate, that's where you could potentially have real problems.”

Populations of songbird migrants already face great challenges, Farnsworth notes. Some estimates suggest between a 40 to 80 percent population decline in certain species in the last several decades. There are many factors in that decline: Loss of habitat in North and South America, as well as the Caribbean; collisions with buildings, cars, power lines and wind turbines and rural land development; even cats pose a problem for migrating birds. Add in climate change, and they face an even more uncertain future.

People can help in several ways, Farnsworth says. On the national level, people can work to restore full US participation in the Migratory Bird Treaty Act, a 100-year-old treaty meant to protect migrating birds. Be politically active and vote, he suggests.

On the local level, keep your cat indoors and advocate for ordinances that keep all cats indoors — and put out bird food during winters, when there is so much snow and not many insects.

“There's no question that supplementing birds' food can help,” Farnsworth notes. “There are tangible, tractable things you can do every day and then there are kind of the grander human population level changes that both can happen.”