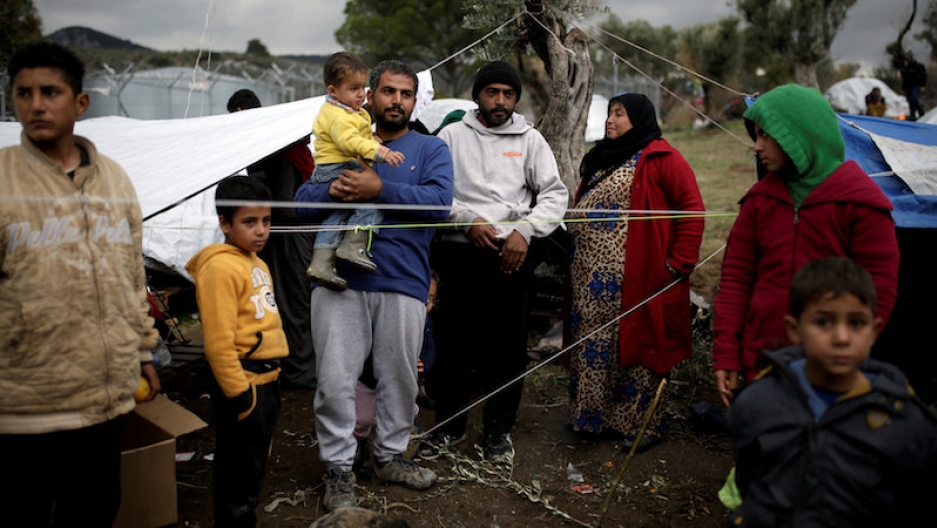 Syrian refugee Bashar Wakaa and his family stand in front of their tents at a makeshift camp for refugees and migrants next to the Moria camp on the island of Lesbos, Greece.

Greece's parliament passed a bill on Tuesday aimed at making asylum procedures simpler and faster and to ease overcrowding on its island refugee camps.

Five camps on Greek islands close to the Turkish coast hold more than double their capacity, government figures show, and have been mired in violence over living conditions and delays in asylum claims that often take months to process.

Human rights groups and the European Commission, which has offered Greece millions of euros in emergency aid, have criticized the government for not doing enough to manage the situation.

Addressing lawmakers before the vote, Migration Minister Dimitris Vitsas acknowledged that the bill "will not magically solve the refugee and migration issue" but said the government wanted to reduce the wait for thousands of asylum seekers.

"What are we seeking to do with this bill? To carry out a speedy processing of asylum claims while respecting the rights of those seeking international protection," he said. The government also planned to hire more staff, including on the islands, he said.

The bill also allows for the imposition of a ban on asylum-seekers traveling beyond the islands until their claims are processed, which had been lifted by Greece's top administrative court last month.

Greece has for years been a gateway to Europe for refugees fleeing violence in the Middle East and beyond, arriving via Turkey before traveling north to wealthier European nations.

A 2016 European deal with Turkey has stemmed the flow but effectively trapped thousands in Greece until their asylum applications are processed.

Although the number of new arrivals remains well below 2015 levels, the pace has picked up in recent months both through the Greek islands and on Greece's northern land border with Turkey, United Nations data shows.