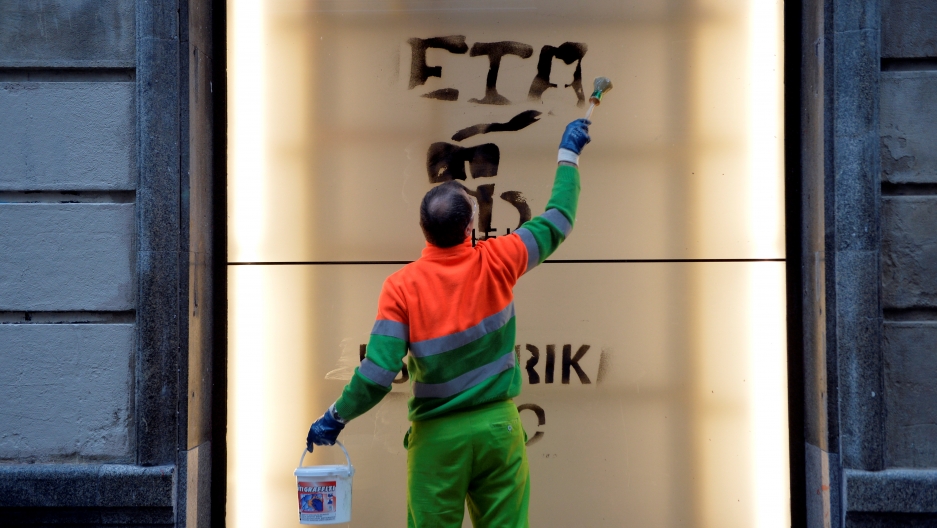 A municipal worker in Bilbao, Spain removes graffiti reading "ETA, Thanks" two days after militant Basque separatists ETA announced their dissolution on May 2, 2018.

On Nov. 20, 1975, Mari Carmen Egurrola Totorica, gathered her six children around the TV in the living room of their suburban Idaho home to watch the evening news. Longtime Spanish dictator Francisco Franco was finally dead.

“Drink this. I want you to remember this night,” she told her kids as she handed them coffee mugs filled with shots of champagne.

It wasn’t something she’d normally do, especially because her children were only in elementary and middle school, but the news was important in her family’s history. On April 26, 1937, Franco allowed Nazis from Germany and fascists from Italy to bomb the town of Guernica, in Basque Country, killing 1,654 people. Totorica and her family survived and ultimately fled to a Basque enclave in the US. They found a new home in Boise, Idaho. Franco spent the next 35 years forcing the Spanish citizens who remained to shed their ethnic and linguistic identities for a uniform Castilian one.

Totorica’s daughter, Gloria Totoricagüena, was 13 the night her family toasted Franco’s death. She was born in the US and has spent much of her adult life studying Basque culture and politics. She was 56 when she learned on May 2 that the ETA, a Basque separatist group formed in 1958 to resist Franco’s repression, had formally dissolved.

“I feel at peace, but I don’t feel euphoric,” she says.

The resistance group, she says, began in 1958 as an effort to preserve Basque language and culture. A decade later, it became a terrorist organization. Over the next few decades, its violent tactics claimed 850 lives. But during that time, Basque Country won autonomous status within Spain, made Basque Euskera its official language, and became the most prosperous region in the Iberian Peninsula, prompting many ETA sympathizers to turn away.

The leaders of ETA, which stands for Euskadi Ta Askatasuna (Basque Homeland and Liberty), wrote a statement that was published in the Basque newspaper Gara. “We are aware that during this long period of armed struggle we have created a lot of pain, including many damages for which there is no solution. We want to show respect for the dead, those injured and the victims that were caused by the actions of the ETA,” the organization said. “We truly apologize.”

Totoricagüena says the announcement was anticlimactic.

“It’s not really the ETA deciding. They’ve been decimated because there’s no new recruits,” Totoricagüena says. “There’s effective democracy, there’s economic development and innovation, magnificent university education systems and healthcare. They don’t have the members, arms or money because they don't have the support.”

According to Census data, there are 69,000 Basques in the US, and while Basques in Idaho number just 8,000, theirs is a unique community. It is one of the most significant ethnic groups in the state and it is highly concentrated around the capital. In fact, its heritage has been preserved in the heart of downtown Boise with a Basque Block that hosts a cultural center and museum, a marketplace, several restaurants and a popular neighborhood pub called Bar Guernica. 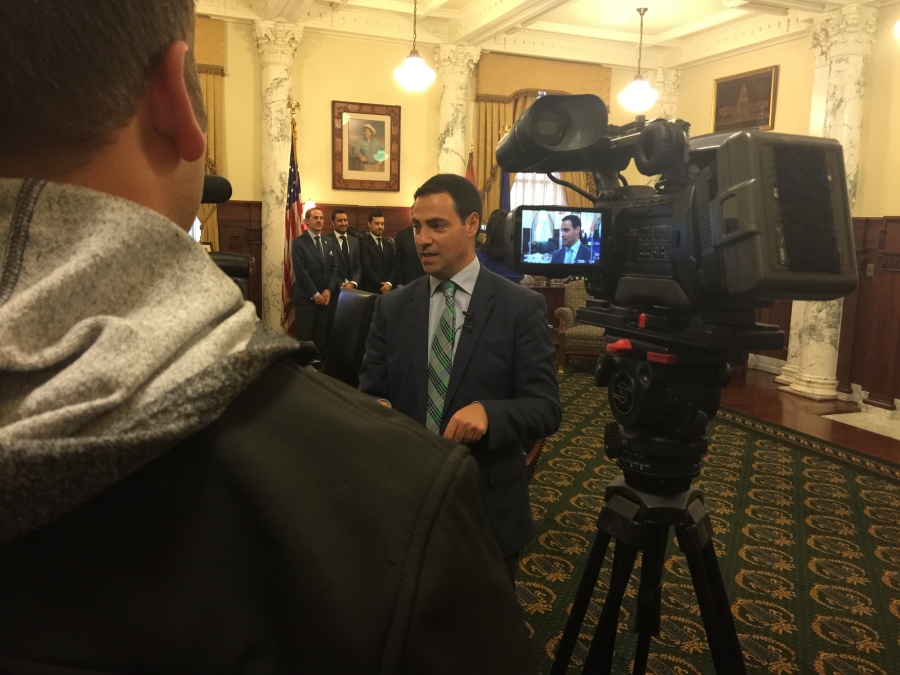 Imanol Pradales, Basque Country's Minister of Economic Development, gives an interview at the Idaho State Capitol during a Basque commercial mission to Idaho in 2016.

On the day of the ETA announcement, Totoricagüena checked the Basque diaspora websites she follows and was dismayed to find most pages had yet to comment on the news. Most of these sites are maintained by volunteers and many feel disconnected from Basque politics, especially because the ETA has been inactive for more than a decade. But Totoricagüena is one of several Basques in Idaho who have made notable social, economic and political inroads with their ancestral homeland, and she is hopeful this news will further her efforts.

She sits on the board of a the Cenarrusa Foundation for Basque Culture, a non-profit organization aimed at promoting cultural exchange, international business and peace in the homeland. Its namesake, Pete Cenarrusa, was a Republican who served as an Idaho politician for 50 consecutive years until his death in 2013.

“He was an intellectual and a practitioner of politics,” Totoricagüena says. Cenarrusa’s parents emigrated from Basque Country to Idaho around the end of the late 1800s to find jobs in sheepherding and agriculture at a time of great economic uncertainty back home. But Cenarrusa became convinced that diaspora communities had an important role to play in promoting peace and prosperity in Basque Country, especially as citizens of a country as influential as the US.

Also: Climate change is claiming aspen groves — and the history of Basque immigrants in America

In Idaho then, Basques usually identified as white and Christian, making it easier for them to gain acceptance in a state that is about 90 percent white. Still, they had to engage the community by joining school boards or running for legislature.

“Pete had to gain trust first. Not just any farmer from Idaho could go to the legislature and say, ‘We need to get involved in international relations,’” Totoricagüena says.

For decades, he worked to inform his local Basque community and others around the US and the world by gathering the media, hosting Basque politicians and traveling to Spain. Between 1972 and 2012, he wrote, promoted and passed four resolutions in the state legislature asking for peace, democracy and a referendum for Basques. A 2002 memorial asked the government of President George W. Bush to offer to mediate the conflict between Basque Country and the Spanish government. 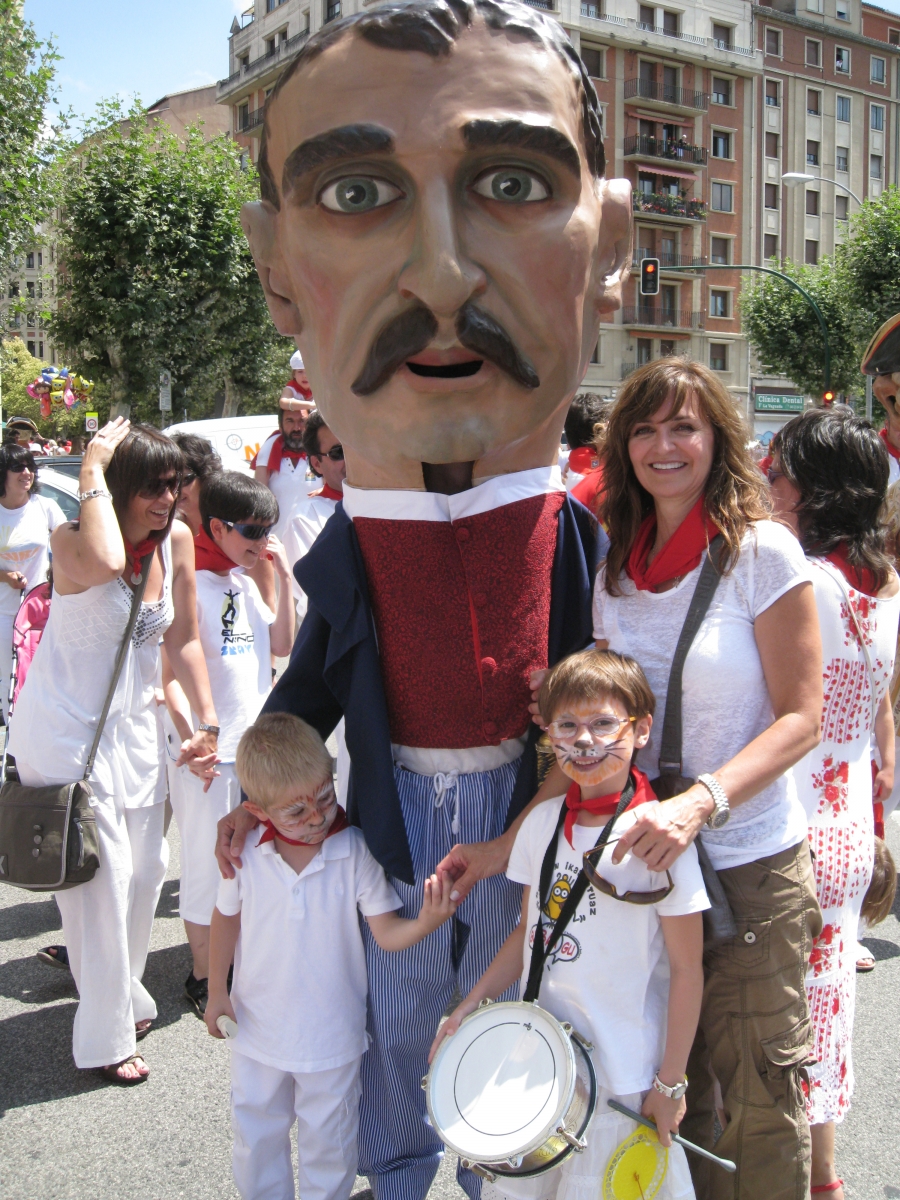 Gloria Totoricagüena (right) poses with children of some Basque Country friends at the San Fermín Festival in Pamplona, Spain in 2014.

“We were euphoric because it had a huge echo in the Basque Country, in the Spanish diplomatic circles and in the European Union,” Totoricagüena says. “People were asking, ‘Where the hell is Idaho and what do they think they’re doing?’”

The state resolution didn’t lead to any official US mediation, but it did increase Idaho’s visibility. The first Boise State University exchange program went to Basque Country in 1973; by 2003 the Cenarrusa Foundation helped BSU establish an entire Basque Studies Department. In 1993, Guernica and Boise became sister cities; today, Idaho has signed many cultural and business agreements with Basque Country’s government.

Totoricagüena credits politicians like Cenarrusa with much of her current work. In 2015, the Territory of Bizkaia and the Idaho Department of Commerce signed an agreement to promote each other for international business options, as did the chambers of commerce of Bilbao and Boise. The Basque government paid for trade missions. Totoricagüena helped Boise host two missions in 2016, and the next year, she led a group from Idaho to Basque Country.

And it turns out, in addition to their Basque populations, Idaho and Basque Country have a lot in common. Both regions are heavily defined by agriculture and are interested in how to process, preserve and distribute food without diluting its nutritional value. 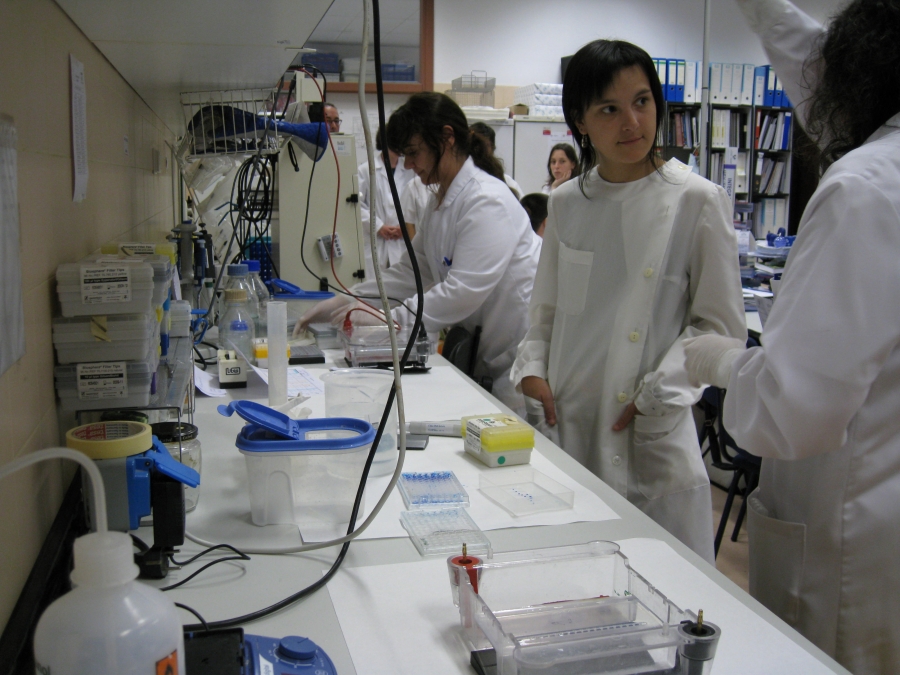 Scientists researching Parkinson’s disease in a DNA laboratory at the Basque Public University in 2014 gathered saliva swabs from Basques in the homeland to research how diet and environment play a role in the development or prevention of this disease.

With 21,000 square miles of territory, the entire Basque Country is small compared to Idaho, which covers 83,797 square miles. But the Basque Country population of three million is almost twice as numerous and its people are incredibly industrious, says Totoricagüena. She says Idaho can learn from Basque Country’s extensive planning in international economic policy and workforce development.

“They are active, not passive, in investing in their human capital and always preparing for the future generations,” she says. Today, she gives presentations about Basque Country to Idaho business people as a private consultant.

Julian Zabalbeascoa is the study abroad coordinator for the University of Massachusetts Lowell’s Honors College, which serves 1,500 students. This year, he says, his faculty-led Basque exchange to San Sebastian was popular; it received 54 applicants for just 24 spots.

“When I was a student, the main narrative of the Basque Country was terrorism,” says Zabalbeascoa, who remembers car bombings, burning dumpsters, riots and rubber bullets from a yearlong study abroad program he participated in from 1999 to 2000. “The few headlines that managed to make it across the Atlantic to the US were never positive things, like the construction of the Guggenheim Museum resurrecting an old neighborhood.”

Zabalbeascoa sympathized with Basques who felt Spain’s crackdown was harsh, but not with ETA’s tactics. “For too long ETA silenced those critics who had a more productive, creative response to the problem. Now I think the Basque Country can be looked at as a model for what works in a community.”

Totoricagüena is also looking forward to turning the page on what being Basque can mean.

“Changing people’s perceptions and educating them takes time,” she says. “I’m in this for the long haul.”