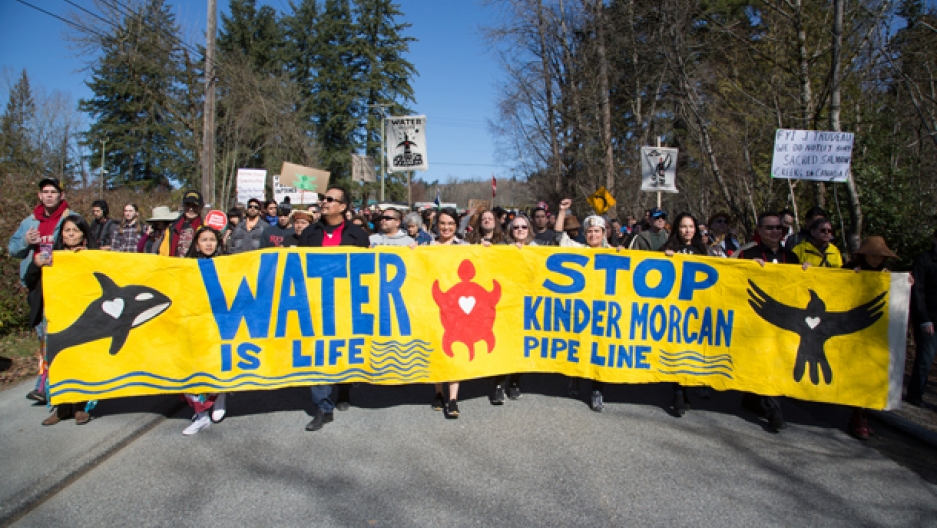 Activists in British Columbia are trying to stop Kinder Morgan’s Trans Mountain pipeline expansion project, which would nearly triple the flow of oil sands crude from Alberta to the port at Vancouver. The protestors say the project endangers the climate.

Members of First Nations communities are contesting the pipeline in court, because half of it crosses their unceded territory. They say a spill could be disastrous for the local environment they depend on for food and medicine.

Some 200 protestors have been arrested at the gate of Kinder Morgan’s Burnaby Terminal near Vancouver. The arrests were mostly peaceful.

Faced with this intense public pressure, Kinder Morgan recently threatened to scrap the $5.8 billion project unless they receive assurance by the end of May that all legal challenges will be resolved. Canadian Prime Minister Justin Trudeau says the project is in Canada’s national interest and is promising federal cash and more.

“We are actively pursuing legislative options that will assert, plus reinforce, the government of Canada’s jurisdiction in this matter, which we know we clearly have. We are going to get the pipeline built,” Trudeau said recently.

Among the protestors arrested and charged was Romilly Cavanaugh, a former environmental engineer who once worked for Trans Mountain, which is now part of Kinder Morgan. Her focus during her time with the company was to respond to and clean up spills and to work on obtaining permits for new construction.

Cavanaugh says she had reservations about working at Trans Mountain from the beginning, but also felt that if she worked within the environmental department she could “at least do the best job possible in terms of environmental protection. But, ultimately," she says, "the industry is a dirty industry. We need to phase it out.”

During the 1990s, Romilly says the company expanded production, but on a much smaller scale than what they now have planned. The current expansion would increase oil “throughput” from 300,000 barrels per day to 890,000.

Cavanaugh strongly disagrees with this. “We’re in a climate crisis. Now is absolutely the wrong time to be investing in any more fossil fuel infrastructure,” she insists. “We should be moving away from this industry as quickly as possible at this point. To be increasing the throughput on that pipeline by almost three times is just absolutely the wrong decision.”

Tanker spills pose an additional risk, Cavanaugh says. “The tanker traffic passes through the city center of a metropolis with 2 million people and then goes out into the Salish Sea, where we have the endangered Orca whales. ... There’s just inadequate equipment available to deal with that.”

Kinder Morgan says the company has robust technology for preventing and cleaning up spills, but this is simply not correct, Cavanaugh maintains.

“In the 1990s, when I was working at the pipeline, if there was a major spill into a marine environment, a successful outcome was for them to be able to contain about ten percent of the [spilled] oil. Very little has changed since then. … The equipment is grossly inadequate.”

Cavanaugh says she chose to protest and get arrested because the Canadian government “is making the wrong choices for the planet and for the people.”

“When I was younger, I really trusted them — naively,” she says. “In fact, when I worked at the pipeline company, I'd started to hear about climate change. It wasn't very well known at that time, certainly amongst people in the public. I really felt the government would take care of it, because it's in the best interest of the people and in the best interests of the planet, and isn't that their job?”

But, despite 30 years of scientific data from the vast majority of climate scientists around the world, Cavanaugh says the Canadian government did almost nothing, primarily because industry “did a really good job of muddying the waters and delaying action."

“They used the same tactics that the tobacco industry used to try to delay action related to cancer being caused by smoking," Cavanaugh says. "As I saw that and each year was passing and more and more poor decisions were being made by the government, like the approval of this project, I thought, ‘This is ridiculous!' If we want change, we have to stand up. In a peaceful way, and with knowledge and with commitment…. [I]t’s naive to sit around waiting for the government to do the right thing. If we want the right thing to happen, we need to make it happen."