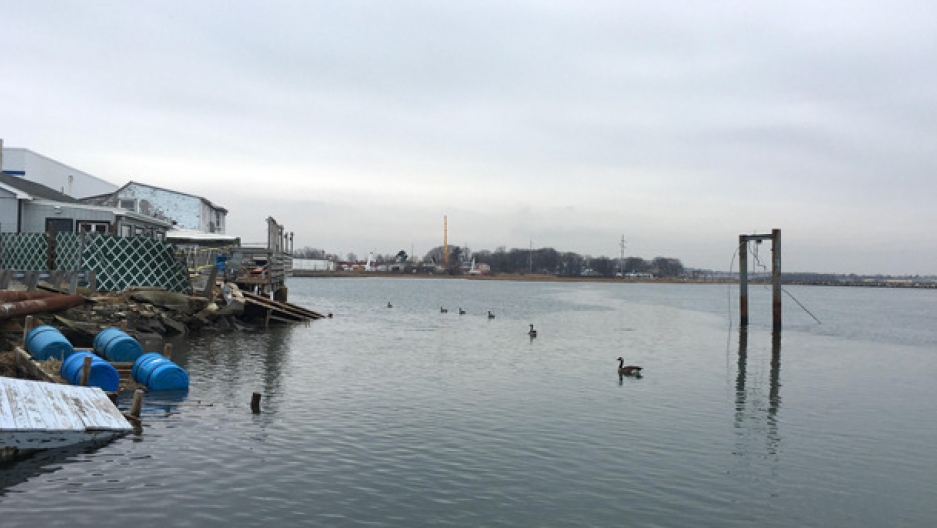 The Rumney Marsh, a haven to both birds and fish, sits in a highly industrial area north of Boston. For decades, the marsh's welfare has been in jeopardy due to its close proximity to an incinerator landfill facility.

Anyone who spends time in Revere, Massachusetts, can see the close relationship between this small industrial town north of Boston and the surrounding waterways.

The area is so used to the water that Revere resident Sandra Hurley Jewkes says that her mother’s house “becomes an island” five to seven times a year when the area is flooded.

Three generations of Jewkes’ family has lived in the house situated right next to the Rumney Marsh Reservation, a 600-acre state park that is a haven for various species of birds and marine life.

The house also sits near a waste incinerator landfill in the adjacent town of Saugus. It is still in operation despite being scheduled to close 22 years ago, in 1996. The landfill is run by Wheelabrator Technologies, a New Hampshire-based company that converts solid waste into energy.

“When the tide comes in and we get these flood tides, the landfill and Wheelabrator become an island also … they are cut off from land,” Jewkes says. “It’s water on both sides. So the water is literally lapping right up on the landfill itself.”

Jewkes is one of several local citizens and activists who are deeply concerned about the possible harmful — and irrevocable — effects the landfill’s contents could have on the surrounding community, waterways and wildlife. The landfill contains fly ash and bottom ash from materials that do not burn during waste incineration, leaving a mix of heavy metals and toxic chemicals, such as mercury, cadmium, arsenic, lead and dioxins.

To make matters worse for residents, the Massachusetts Department of Environmental Protection has given the green light to open the cap of the site and dump an additional half a million tons of carcinogenic fly ash and bottom ash. This decision came despite the fact the landfill does not have a now-standard plastic liner, as similar facilities do. Its construction in the 1950s predates that requirement, says Kirstie Pecci, director of the Zero Waste Project and a senior fellow at the Conservation Law Foundation.

Still, Pecci says, even a proper plastic liner would leak at some point, given the relationship of the landfill to the water.

“That’s going to eat through a plastic liner or poke through sooner or later. So even if this were plastic-lined, I’d say we need to be testing what’s escaping the landfill … There’s no way to keep the contamination from entering the marsh because it’s in the water,” Pecci says. “By definition, it’s going to spread through the water.”

The worry of Pecci and others is heightened by the fact that the incinerator landfill is the only one in Massachusetts where the state does not do routine checks of sample groundwater, as mandated by federal law.

Resident Elle Baker says she does not understand why Wheelabrator has tried to be part of the community by financially supporting various efforts, but has not paid for groundwater samples or an environmental impact report.

“If they are willing to write checks for little league, for tree lighting, for other things like this in the community, why not for an environmental impact report? Because that is truly being a good neighbor,” Baker says.

Perhaps the report's findings could help quell some of the residents' concerns.

"They don’t want to provide that to the community, and that’s what’s concerning,” she says.

Says Jewkes: “I think they aren’t taking [samples] because they don’t want to know” the results.

Elaine Hurley, Jewkes’ mother, remembers the scene at the landfill when fly ash was burned before there were scrubbers on the incinerator. The toxic fumes would come straight out of the smoke stacks, leaving a substance that resembled black soot — but with a greasy feel to it.

Those effects have fueled the concern of Joan LeBlanc, the executive director of the Saugus River Watershed Council, a nonprofit organization looking to protect and restore the river’s natural resources. The river runs through Rumney Marsh, where the harmful chemicals that could be leaking out the landfill have potential to contaminate the entire food chain. That involves birds such as blue herons and snowy egrets; fish such as rainbow smelt and alewives; and, of course, humans, who eat the fish.

Given that the area is predicted to see a rise in the sea level of one to two feet by the end of the century, “these are the type of issues that keep me up at night," LeBlanc says. "If there were some kind of major breach in a storm here with this ash landfill and that were to empty into the marsh, I just don’t know how or if you would be able to clean that up.”

George Thurston serves as the director of the program in exposure assessment and human health effects at New York University's School of Medicine. He says long-term pollutants that have been identified at the landfill can lead to increasing risk of cancer. Communities located near the landfill already have higher rates than the rest of the state of leukemia, testicular cancer and larynx cancer, according to the Massachusetts Cancer Registry.

Opening the landfill’s cap greatly increases the possibility of exposure to these pollutants, Thurston says, especially if an accident were to happen.

“The biggest concerns are when things don’t go as they should. You need continuous monitoring to determine that,” Thurston says.

Going forward, Thurston says, such facilities could be made “basically obsolete” with a larger emphasis on recycling and composting. Wheelabrator itself, which burns 123,000 tons of municipal waste each year in 10 communities in Massachusetts alone, estimates that 80 percent of the trash it burns could be recycled or composted.

State Rep. RoseLee Vincent, who represents Revere, has twice introduced legislation to close the Wheelabrator landfill. She says she is flummoxed how those in charge want to not only keep the facility open, but also add more waste to it.

“My children don’t live here, but someone’s children live here now,” Vincent says. “Someday some kids should be able to go fishing in that water.”

This article is based off a report that aired on PRI’s “Living on Earth” with Steve Curwood.