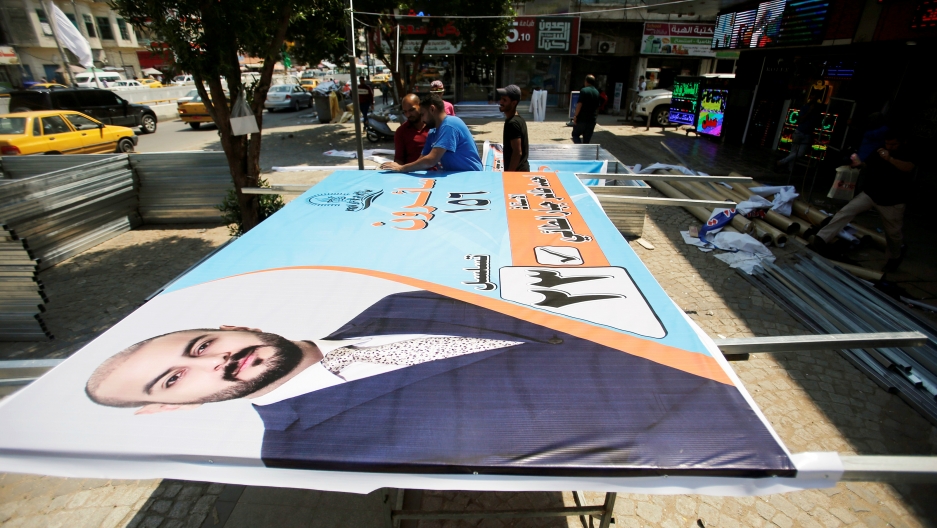 Iraqi men work on the campaign posters of candidates ahead of May's parliamentary election, in Baghdad, Iraq, April 14, 2018.

Despite growing up as the daughter of Iraq’s former prime minister and earning an international relations degree from a prestigious British university, Sarah Ayad Allawi feels many of the same political frustrations as other 29-year-olds in Iraq.

Allawi wanted to run as a legislative candidate of the National Accord political party, the party of her father Ayad Allawi, interim prime minister from 2004 to 2005, in the elections Saturday. But a minimum age of 30 disqualified her for entering the race. The rule serves as check on the political power of the young, she says.

Only 20 of the 328 Iraqi lawmakers are under the age of 40. They are the voice for an underrepresented demographic, representing only 6 percent of the parliament in a country where the median age is 19.

“You can be certain that I will be 30 by the time this next parliament has its first session,” she said.

Iraqis in Allawi’s generation grew up knowing mainly conflict and limited economic opportunities. Now they are getting a chance to change their wounded country. They are part of a new and growing wave of political activism in the wake of a militant threat against activists stretching back to 2003, when the US invaded Iraq.

Young voters say they are getting involved because they are ready for a change.

“The Iraqi people are ready to pick new faces,” said first-time voter Mohammed Saleh, 22, a computer engineering student in Baghdad. “The youth especially are tired of the corrupt politicians.”

The May 12 parliamentary race is the fourth since the beginning of the US occupation and the first since Iraqi forces drove ISIS out of major cities like Tikrit and Mosul last year. Iraqi officials say 24 million out of its population of 39 million are eligible to vote. Among them are 4.5 million Iraqis who will cast ballots for the first time.

“From what I see and hear from youth on the ground and in social media, I think there is a real chance for change,” said Saleh, who supports Sa'iroon, an electoral alliance between supporters of the 44-year-old influential and independent Shiite cleric Moqtada al-Sadr and the secular Iraqi Communist Party.

The unlikely alliance between Iraq’s communists and conservative Shiite activists has a history.

The two groups worked together to overthrow King Faisal II in 1958 and coalesced again in 2016 to lead protests in Baghdad’s Tahrir Square demanding Prime Minister Haider al-Abadi deliver on his anti-corruption promises.

In this round of elections, the odd pairing is united in shared disgust over poor-quality services, education, healthcare and public security due to corruption. 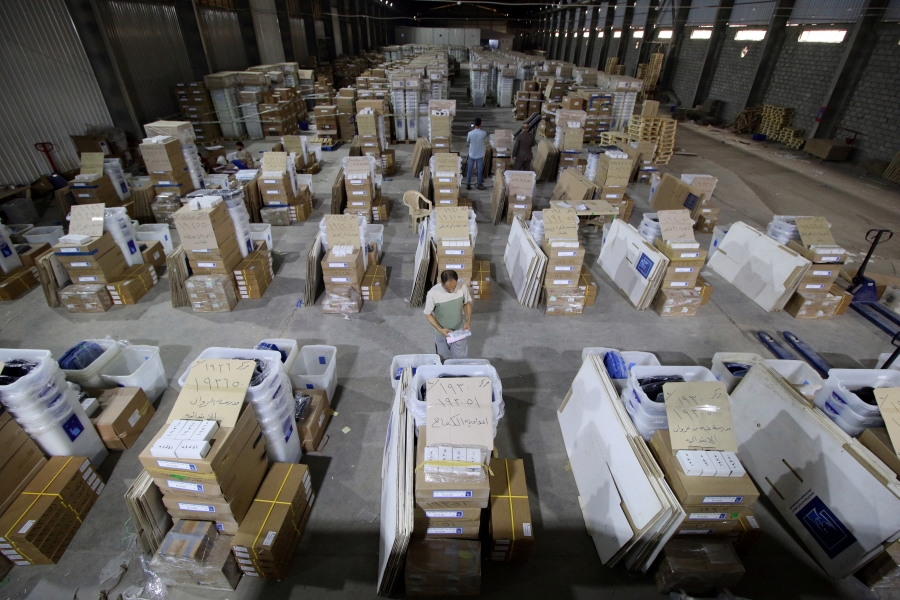 Employees of the Iraqi Independent High Electoral Commission inspect voting materials at a warehouse in Basra, Iraq, May 3, 2018.

Transparency International ranks Iraq near the bottom of its global corruption index at 169 out of 180. Many blame government corruption for the collapse of the Iraqi army in the face of ISIS militants’ capture of Mosul, Tikrit and other territory in 2014.

The army’s failure led to the rise of self-protection forces like al-Fateh, a hybrid militia and political party whose Shiite Muslim ideology resembles that of Lebanon’s Hezbollah.

Al-Fateh is also looking to create a new, younger generation of Iraqi leaders.

Hadi al-Amiri, 63, the Iranian-trained head of the military wing of the Supreme Islamic Iraqi Council political party, runs al-Fateh. He is supporting several candidates under 40. Many served in the militia last year in the fight against ISIS.

One al-Fateh candidate, Mohanned al-Temimi, 37, posted an online video claiming that his visit to China as a wholesale apparel broker gave him a solid background in global affairs while his service to the al-Fateh militia proves his readiness to fight for Iraq’s national interests.

‘A catastrophe on our hands’

Not all Iraqis plan to vote. Political violence has led some young people to say they’ll stay home. Others are too disillusioned with politics to offer candidates their support.

“I will not vote because the entire system is corrupt,” said Yassir Adnan, 22, a medical student, in Karbala. “Our constitution is not humanistic. It contains many discriminating clauses based on religious and ethnic identity and age.”

In Kirkuk, Salah al-Kanaan, a 35-year-old computer operator at a refinery company, said he understands the reasoning behind calls to boycott the election but worries that Iraq’s sectarian deadlock will continue if too many young people refrain from voting or choose to vote for parties based on their religious affiliations.

“Youth, especially those participating for the first time, will decide who wins,” Kanaan said. “If they choose carefully, things could be great. If not, we will have a catastrophe on our hands.”

Young Iraqis have demographic leverage, and they should use it to run as candidates and shape policy, said Ali Bashar, 31, a youth organizer and international relations professor at Bayan University in Irbil.

"Today, youth represent the key to electoral victory,” said Bashar, one of the founders of the Nineveh Political Youth Forum, a new education and advocacy movement which tried to develop talent in communities in order to field candidates, and has made efforts to get out the youth vote.

“All parties and political blocs are making an effort to recruit this demographic they believe they need to gain power in parliament.”

Engineer Mohammed Abbas, 36, is one such recruit. He participated in a December session of Bashar’s political youth forum and is now running as a candidate with Abadi’s Victory Alliance in the upcoming election.

“Just because a candidate is young does not mean he is better,” Abbas said. “I hope people vote for me based on my record of community service and my professional qualifications as an engineer to advocate and guide our country’s reconstruction program.”