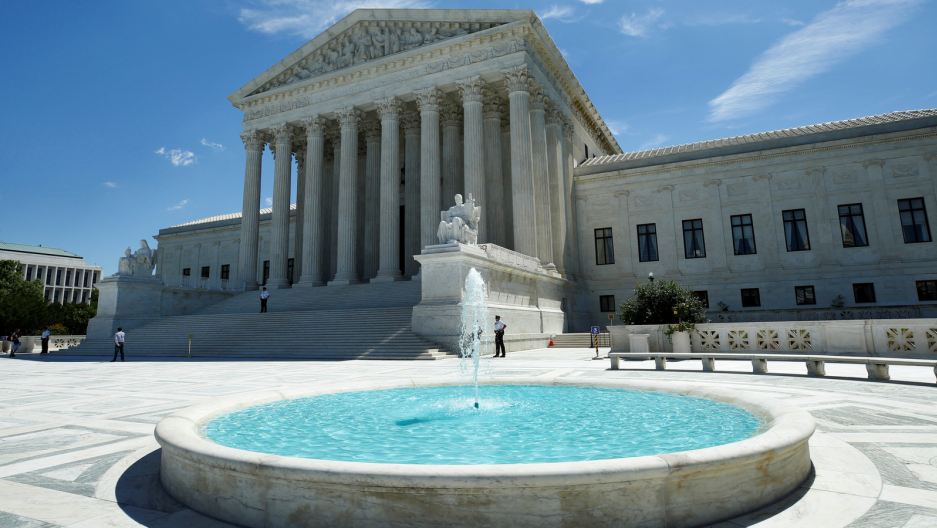 The building of the US Supreme Court is seen in Washington, DC, June 26, 2017. A recent study shows that three-fourths of respondents back a constitutional amendment outlawing "Citizens United."

Liberals and conservatives overwhelmingly support a constitutional amendment that would effectively overturn the Supreme Court’s seminal campaign finance decision in Citizens United v. Federal Election Commission, according to a new study from the University of Maryland and nonpartisan research group Voice of the People

Three-fourths of survey respondents — including 66 percent of Republicans and 85 percent of Democrats — back a constitutional amendment outlawing Citizens United.

The study also indicates that most Americans — 88 percent overall — want to reduce the influence large campaign donors wield over lawmakers at a time when a single congressional election may cost tens of millions of dollars.

That most Republican and Democratic voters want to amend the US Constitution to limit big money’s role in politics is notable because it’s the “most drastic step that can be taken,” said Steven Kull, director of the University of Maryland School of Public Policy's Program for Public Consultation, which conducted the study.

The 2010 Citizens United decision specifically allowed corporations, unions and certain nonprofits to raise and spend unlimited amounts of money to advocate for and against political candidates. It also gave rise to super PACs — lightly regulated political committees that have become major weapons in both state and federal politics.

Candidates and political parties, meanwhile, may by law only accept limited contributions.

Overturning Citizens United has been many liberals’ dream for years, although it’s highly unlikely to happen. The traditional route for amending the Constitution requires a vote of two-thirds of both the House and Senate, followed by ratification by three-fourths of state legislatures. The Constitution was last amended in 1992.

Most survey respondents also support congressional action on money in politics that fell short of a constitutional amendment, such as a bill that required corporations and unions to report campaign spending to shareholders, members and the public in addition to disclosures they file with the Federal Election Commission.

Some major corporations with household names indeed keep their political practices and spending quiet, such as Expedia, Garmin and Netflix, among others, according to a study by the nonpartisan Center for Political Accountability and the University of Pennsylvania.

A recent Center for Public Integrity analysis found that Congress has little appetite for passing laws addressing campaign cash: Of more than two dozen money in politics bills introduced early in the current congressional session, lawmakers have not conducted a single formal hearing or vote on any of them.

Less than half of those surveyed consider an anti-Citizens United amendment to be an attack on free speech. More than four out of five agree with the statement that “the rich should not have more influence just because they have more money.”

David Keating, president of the Institute for Free Speech, a conservative nonprofit, questioned the survey’s findings.

“If Americans knew that repealing Citizens United would allow Congress to censor critics and make it more difficult to defeat corrupt incumbents then they’d be less likely to support it going away,” Keating said. “It’s typical for academics to tout biased polls with questions that try to undermine support for free speech."

Although Democrats typically tout reducing big money and eliminating secret money in politics, they don’t always follow their own counsel.

For example, a Center for Public Integrity investigation revealed how a big-spending Democratic super PAC used a loophole in federal law to hide the identities of its donors until after Alabama’s special US Senate election in December. Democratic presidential candidate Hillary Clinton also benefited from millions of dollars worth of so-called “dark money.”

One campaign finance reform that most survey respondents dismissed? Funding presidential campaigns with public money using a federal system that’s largely fallen out of favor since the Citizens United decision. Two-thirds of respondents would prefer the federal government nix the checkbox on their tax forms that provides $3 to campaigns and instead direct the funds to other areas, such as pediatric research or deficit reduction.

Campaign finance reform isn’t the only thing voters on both sides of the aisle agree on: the University of Maryland found in a study late last year that Americans on the whole thought lawmakers should wait longer periods of time before cashing in on K Street as lobbyists.

The Center for Public Integrity is a nonprofit investigative journalism organization based in Washington, DC.