Gina Haspel could be the first woman to lead the Central Intelligence Agency. She begins confirmation hearings on Wednesday, May 9 and will face tough questioning about her record working on the CIA's "dark site" prisons, where she oversaw torture.

President Donald Trump’s controversial pick to lead the Central Intelligence Agency faces what is sure to be a tough Senate confirmation hearing Wednesday.

Gina Haspel, a 33-year CIA veteran, has spent much of her career out of the public eye as part of the agency's clandestine service, where agents work undercover.

It is highly unusual for the resume of a CIA chief to be so secret. Hardly anything on her career has been officially declassified. Most of what is known on her involvement in the CIA’s torture program has emerged from news reports.

But by most accounts, she is highly respected within the agency. Since last year, Haspel has served as the CIA's deputy director beneath Mike Pompeo, who is now Secretary of State. If she can muster enough votes, Haspel, who is 61, would be the first woman to run the intelligence agency.

1. She ran a secret CIA “black site” where detainees were tortured

Not many details are known about Haspel’s various career postings for the CIA — and the agency has never acknowledged her role overseeing a secret prison in Thailand. That information has been independently reported by various news outlets such as ProPublica and the New York Times.

Haspel transferred to the CIA’s Counterterrorism Center, and her first day was Sept. 11, 2001. In her three years in the center, she oversaw use of “enhanced interrogation” techniques, a euphemism for methods such as waterboarding, which are widely viewed as torture.

The first prisoner interrogated at the Thailand black site was Abu Zubaydah, an alleged al-Qaeda operative suspected of being a senior plotter in the 9/11 attacks. Zubaydah was waterboarded 83 times in August 2002 alone, according to a 2005 Justice Department memo. This happened before Haspel’s arrival.

According to news reports, Haspel took over the black site in October 2002 and oversaw the torture of Abd al-Rahim al-Nashiri, the alleged mastermind behind the bombing of the USS Cole in 2000. The Senate Intelligence Committee’s 2014 Torture Report found he was subject to waterboarding at least three times.

“We really need to know in detail what it was she was doing at the secret site,” says John Kiriakou, a prominent ex-CIA officer who served nearly two years in prison for revealing the agency's torture program. “It’s one thing to say she was following orders. We need to know what she approved and exactly what her role was in the torture of Abd al-Rahim al-Nashiri.”

Related: Trump's new pick for CIA director has a murky past with torture programs

The Thailand black site was shut down in December 2002 — on Haspel’s watch — after news reports revealed Zubaydah was being held in the country.

Evidence arose Tuesday that Haspel may have been present at another black site: Khalid Sheikh Mohammed, known as the main architect of the 9/11 attacks and who is now held at Guantanamo Bay, asked for permission to share information about Haspel with the Senate Intelligence Community, the New York Times reported. It is not known whether Haspel played a role in his torture. 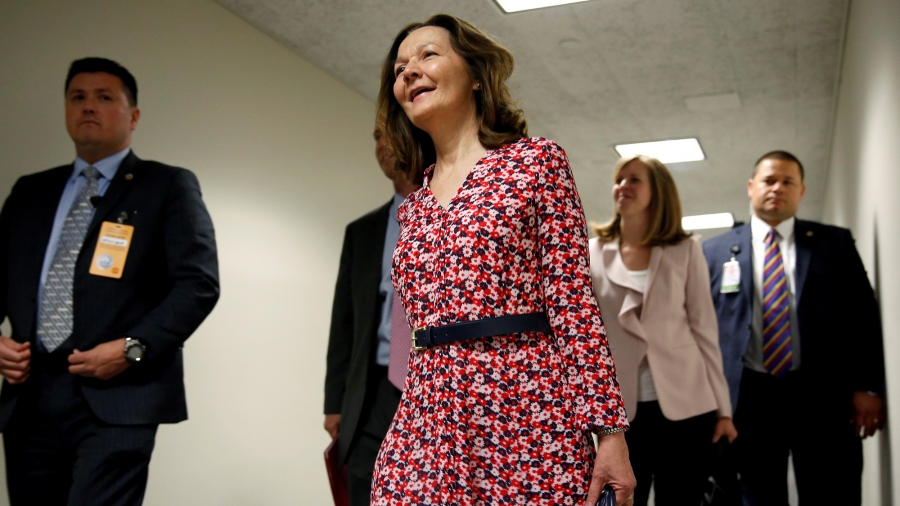 Gina Haspel, Trump's pick to replace Mike Pompeo as the head of the CIA, will face questioning by the Senate Intelligence Committee on Wednesday, May 9.

2. She played a major role in the destruction of videotapes depicting that torture.

In the mid-2000s, Haspel served as chief of staff to Jose Rodriguez, the former director of the CIA's National Clandestine Service. He ordered the destruction of some 92 videotapes depicting the interrogation methods being used at the Thailand black site on Haspel’s watch.

Haspel herself drafted the cable directing agents to destroy the tapes with an “industrial strength shredder.” Rodriguez, who has always stood by the torture techniques, details Haspel’s role in his 2013 memoir, “Hard Measures.” (He does not, however, name her — instead referring to her as “Jane” or his “chief of staff.”)

But the tapes’ destruction set off a lengthy Justice Department investigation by special prosecutor John Durham. In the end, no one was charged.

The CIA — and Haspel’s supporters — have tried to paint her as just following orders. The agency released information last month saying as much: A declassified CIA “disciplinary review” by the agency’s then-deputy director Michael Morell in 2011 concluded the decision to destroy the tapes was taken by Rodriguez alone, and Haspel acted “appropriately in her role as Mr. Rodriguez’s chief of staff.”

3. She is popular within the intelligence community — and the CIA has been trying to improve her profile among the general public.

Notably, Haspel has the support of several former CIA directors and acting directors, as well as former senior government officials.

More than 50 former officials wrote a letter to the Senate intelligence committee in support of Haspel, saying her, “qualifications to become CIA Director match or exceed those of most candidates put forward in the Agency’s 70-year history.”

And although the letter recognizes that most of her achievements “cannot be shared publicly,” they ensure that “she will speak truth to power, offering unbiased intelligence to policymakers no matter how difficult the situation.”

Separately, ever since Trump announced Haspel’s nomination in March, the CIA has been releasing limited information about her to the public.

“It’s somewhat exceptional that the CIA has engaged in this propaganda campaign that consists of almost total secrecy, combined with selective leaking about her background,” says Sarah Dougherty, senior fellow with Physicians for Human Rights’ US anti-torture program.

In March the CIA released a brief biography of Haspel. Titled “Get to Know Our Deputy Director,” it gives an overview of her career, describes her upbringing in Kentucky, and adds in some fun facts: Haspel apparently keeps a five-foot-tall poster of Johnny Cash in her office.

Of the period where she oversaw torture, it says, “She walked in amid the commotion, sat down at a computer, and got to work. She didn't let up for three years, often working seven days a week.”

The CIA also released a two-page declassified timeline of her career last week. Haspel’s three decades with the agency began with postings in the CIA's Africa and Eurasia divisions. In the 90s she led the agency’s work on Russia.

4. She’s had second thoughts on her nomination.

Haspel sought to withdraw her nomination Friday over concerns her role in the torture program would get in the way of her confirmation by the Senate, according to the Washington Post.

Senior White House aides, including legislative affairs head Marc Short and press secretary Sarah Huckabee Sanders, met with her on Friday evening for several hours. It wasn’t until Saturday afternoon that it was confirmed Haspel would accept the nomination.

5. Her confirmation vote will likely be very close.

Both Republicans and Democrats have questioned Haspel’s record, particularly on torture.

Haspel needs every vote she can get in order to secure confirmation — and may need to convince at least one Democrat to vote for her, too.

Republicans hold a 51-49 majority in the Senate, and with Arizona Sen. John McCain away as he undergoes treatment for brain cancer, that narrows even more to 50-49. At least one Republican, Rand Paul, has said he’ll oppose her confirmation.

What we don't know

1. Does she support waterboarding and other enhanced interrogation techniques?

Haspel has almost never spoken in public. Wednesday’s Senate hearing will be the first time most people hear her voice.

Her feelings on what went on in Thailand in 2002 are not known, but there are indications she does support what happened.

Glenn Carle, a former undercover CIA interrogator, described her to The Atlantic as “one of the architects, designers, implementers and one of the top two managers of the [Enhanced Interrogation Techniques program] and a true believer, by all accounts, in the ‘Global War in Terror’ paradigm.”

2. If she supported torture back in 2002, have her feelings changed over the years?

There’s little to say her feelings have — or haven’t — changed. But there’s also little to demonstrate Haspel has had a change of heart since her Thailand black box posting.

“It’s one thing to say, ‘I would start up this program again,’” Dougherty says. “And yet she’s held very senior roles where she could’ve denounced it. And if there’s any information that would exonerate her, why isn’t that being shared?”

3. Why were the tapes destroyed?

Rodriguez has always maintained that the destruction of the tapes was legal, though many legal scholars and anti-torture advocates disagree. Rodriguez said the decision was made was to protect the identities of his CIA interrogators.

Memos released in 2010 in response to a Freedom of Information Act request by the American Civil Liberties Union showed that Rodriguez was concerned the tapes would become public. One colleague wrote of Rodriguez, “the heat from destoying [sic] is nothing compared to what it would be if the tapes ever got into public domain — he said that out of context, they would make us look terrible; it would be 'devastating' to us.”

“Honestly, they were probably destroyed to keep them away from the courts and Congressional investigators,” says Katherine Hawkins, an investigator with the Project On Government Oversight. “It’s destruction of really important evidence. Frankly, the CIA has a history of destroying incriminating records. This is probably the single most dramatic example of it.”

The question is almost sure to arise at Wednesday's hearing.

4. What would she do if Trump asked her to continue use of waterboarding and other torture techniques?

The Senate in 2015 voted overwhelmingly to ban torture. President Barack Obama ended the black site program in a 2009 executive order issued just after he was sworn in. Torture is also illegal under US law and international human rights conventions.

But Trump has spoken in favor of waterboarding and other enhanced interrogation techniques, both on the campaign trail and as president. Days after taking office in January 2017, he told ABC News “absolutely I feel it works” and that the US must “fight fire with fire.”

And he clearly supports Haspel because of — not despite — her record on torture.

My highly respected nominee for CIA Director, Gina Haspel, has come under fire because she was too tough on Terrorists. Think of that, in these very dangerous times, we have the most qualified person, a woman, who Democrats want OUT because she is too tough on terror. Win Gina!

Human rights advocates wonder whether Haspel would bring back such techniques if asked.

“She already followed orders to do so,” Dougherty says. “She already shows that deficit in leadership and professionalism and judgment. We already have a president who has shown enthusiasm for torture. So that’s not a risk this country should take.”

5. What would her confirmation mean for the United States’ legacy on torture?

Many say Haspel’s confirmation would demonstrate that the US, despite its many statements to the contrary, condones torture of detainees.

“It makes it difficult for the US to speak out from a position of moral authority on abuses happening in other states,” Dougherty says. “It sends a message to the world that the United States’ commitment to an absolute ban on torture is less than 100 percent.”