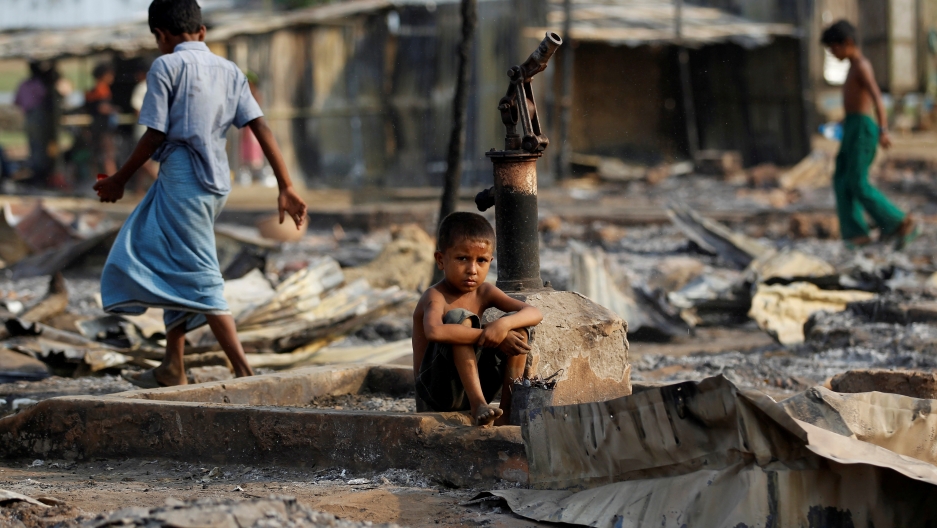 A boy sits in a burnt area after fire destroyed shelters at a camp for internally displaced Rohingya Muslims in the western Rakhine State near Sittwe, Myanmar May 3, 2016.

The mass exodus of the Rohingyas from Myanmar became international news in August of 2017.

But the military’s campaign against the Rohingyas, a Muslim minority in Buddhist-majority Myanmar, actually began years earlier — and since 2012, a small network of citizen activists have been risking their lives to secretly film its impact.

Their harrowing footage, and the first-ever on-camera interview with a member of the network, are featured in the new FRONTLINE documentary, "Myanmar’s Killing Fields."

“Even though it was risky to film, I did it to help my people,” says “Sabo,” who agreed to speak on the condition that FRONTLINE protect his identity.

Airing Tuesday on PBS, "Myanmar’s Killing Fields" is US television’s most comprehensive investigation of the Myanmar military’s violent crackdown on the Rohingyas — an effort that the United Nations has described as having the “hallmarks of genocide.”

The Myanmar military denies abuses and says it has been fighting a militant Islamist Rohingya group, ARSA, that has attacked and killed security forces at police and army bases. But with secret footage filmed by the network, and firsthand accounts from victims and their families, the documentary depicts an orchestrated campaign to target civilians, state-sanctioned violence and mass murder.

Including in Chut Pyin, one of dozens of Rohingya villages that were attacked and burned to the ground last August.

Sabo was filming in a nearby village as survivors from Chut Pyin streamed in — men, women, and children, many of whom had been shot in the back as they fled.

“They were all in a terrible state,” Sabo says in the above excerpt from Myanmar’s Killing Fields. “They were traumatized after seeing brothers and sisters killed … Only God knows how much they suffered.”

FRONTLINE tracked down survivors seen in Sabo’s footage, who independently recounted how the military attacked civilians and raped women and children.

“I was shot and fell in the rice field. I could not get up, I was in so much pain. Then four soldiers raped me,” 16-year-old Jamila Khatun, now living in a refugee camp across the border in Bangladesh, tells FRONTLINE.

Another survivor, Nur Begum, describes being rounded up and taken into the bushes, where she says a soldier shot dead a woman who tried to fight back.

“A soldier cut off her breast,” Begum says, sobbing. “He held it up like this and showed us and it was shaking. He said if we screamed, they would do the same to us.”

Then, she says, several soldiers raped her.

Village leader and medic Rashan Ali says he did what he could to treat the victims: “I treated 92 people there … They were lacerated, they cut their breasts, then they shot them. I treated them with whatever I had.”

Many of the rape victims, Ali says, were children.

“Some of them could not bear it and they died,” he says.

Hear from other survivors and learn about the roots of the crisis in Myanmar’s Killing Fields, premiering Tuesday, May 8, at 10 p.m. EST/9 p.m. CST on PBS stations (check local listings) and online. From producer Evan Williams (Hunting Boko Haram), the documentary is an astonishing and harrowing investigation of what UN High Commissioner Zeid al Hussein calls “a textbook case of ethnic cleansing.”

This story originally appeared on FRONTLINE.