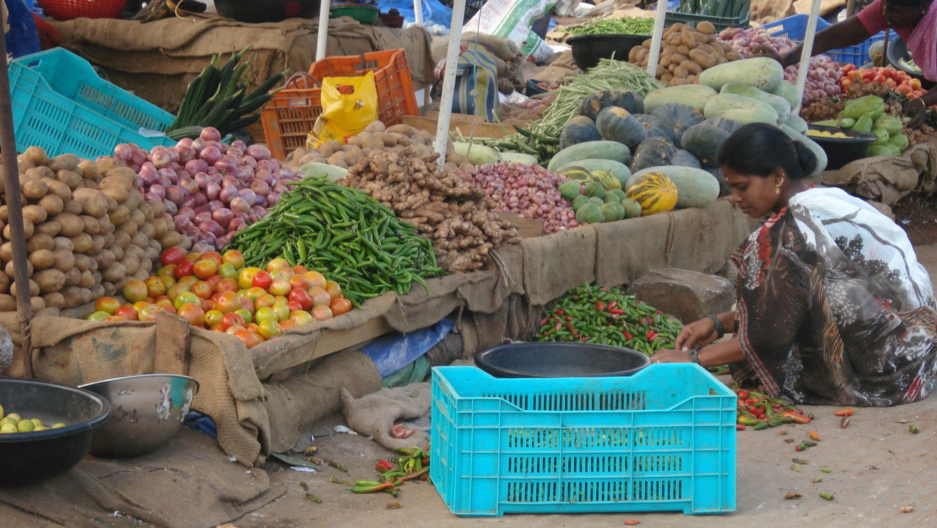 Despite its congenial climate, the Indian state of Kerala is not agriculturally self-sufficient. Relying on produce from neighboring states wasn't a problem for Keralans, who have high literacy rates and tend to choose better paying jobs over farm positions.

But then chemicals on imported food were blamed for high cancer rates. This, in turn, has sparked a revolution: A push by the state government to ensure its agriculture is 100 percent organic by 2020.

Just five years ago, Kerala imported 70 percent of its food. Biju Prabakhar, the director of Agricultural Development for Kerala, says that between 2010 and 2013 they started finding high amounts of pesticide residue on vegetables as well as antibiotics in meat and poultry.

“[The chemical residue] was actually widely publicized in the media — that these kinds of spurious materials are in our food, and the medical community agreed this is one of main reasons for the cancer, because Kerala has a high incidence of cancer,” Prabakhar said.

With cancer rates increasing more than 10 percent faster than in the rest of the country, the urgency to become agriculturally self-sufficient and chemical-free started to grow.

The ambitious goal is not without challenges. A third of the state’s agricultural land is devoted to export crops like black pepper, turmeric, rubber, coffee and coconuts. Since there is a shortage of farm labor, farmers favor these crops over more labor-intensive vegetables. Kerala’s low birth rate and high literacy rate means there are better paying jobs to choose from besides farming.

“In last 10 to 20 years, what is happening in Kerala is that, because people were moving away from farming, most of the people who have land, they are into other occupations, so the land [is] lying fallow,” says Usha Shulapani, director of the sustainability nonprofit Thanal. That unused land resulted in people buying land as a commodity and agricultural land in an already small state became increasingly unavailable.

Shulpani also says land leases are too short to incentivize farmers to keep up the quality of the soil. To combat the lack of motivation to maintain soil quality, the Communist state government created a plan called “Green Kerala.” The program has many facets, including taxing owners who leave land fallow or taking it over for landless farmers, planting vegetable gardens in schools and creating biogas from compost. One initiative, the “agripreneurship fair” held at the former Maharajah’s Kanakakkunnu Palace, showcased various ways farmers can add value to their produce: from turning coconut fiber into shoes and handbags to making pasta from root vegetables and turning jackfruit into wine. Farmers can bring their root crops to the Central Tuber Research Institute and turn them into jam, flour, snacks and much more.

One problem farmers face in Kerala is soil quality, as the earth is acidic and needs lime to grow food. But heavy monsoon rains wash much of the lime out of the soil, so mineral supplements are vital for healthy soil. But many government subsidies only cover the cheapest nitrogen fertilizer, urea.

“The subsidized urea is given at around five rupees per kilogram” says Thomas Anish Johnson, a soil survey officer who teaches as Kerala Agricultural University. “While the other vital nutrients, that is phosphorus and potash, around 20 to 25 rupees per kilogram — so that is three to four times the price of the urea.”

Many of the organic treatments are not made widely available and most are expensive. Agricultural officer Asha Raj runs a self-help group for women, many of whom are poor and with little education. Raj invites members of the group and teaches them to make their own biocontrol mixture at her office, which doubles as a plant nursery. The Kerala state government sent Asha Raj to Hyderabad to study biocontrol methods at the national institute of plant health management. And now, she’s passing on that knowledge.

Asha Raj says she’s trained dozens of farmers and their organic crops now sell for prices at least 50 percent higher than conventional ones.

Kerala’s agriculture director, Biju Prbakhar, concedes the government might have to subsidize the farmers to help them become totally organic. He says higher prices for safe, nutritious food are a bargain for consumers, because chemical-free produce is the key to improved public health.

“The farmers have to be subsidized,” he says. “Because they are the persons who are producing. The question is whether you’d like to pay more for foodstuffs, or whether you like to pay at least ten times in the hospital for treatment of some of the disease.”

And with 100,000 tons of chemical-free produce a year, Kerala is already halfway towards its ambitious goal — 100 percent organic by 2020.

A version of this story originally appeared on Living on Earth.