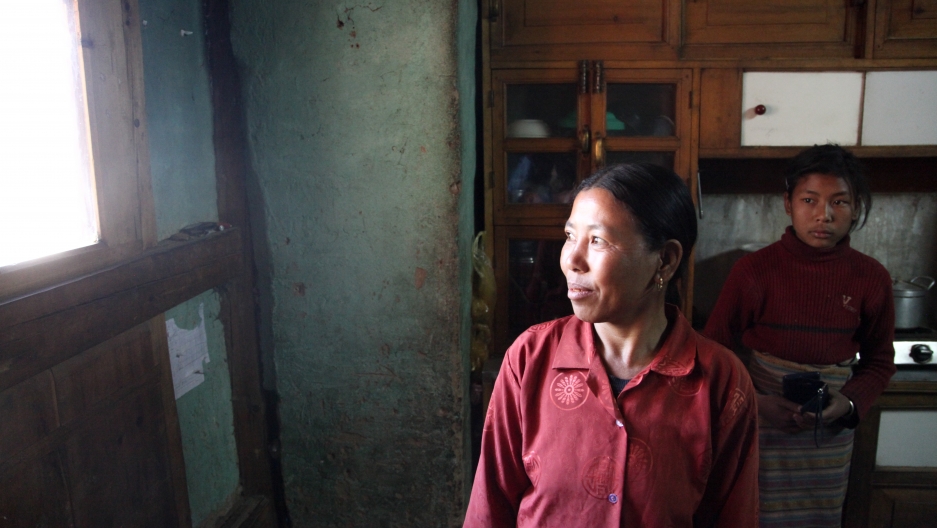 Shamans, like Tsering Yangzom in the Haa Valley, often treat patients experiencing symptoms of mental illness. She describes them as being afflicted by deities and treats them by invoking mantras.

The tiny kingdom of Bhutan, tucked away in the Himalayas between China and India, is known for its innovative Gross National Happiness Index, a measurement tool used to incentivize policies that increase the well-being of its people. When Bhutan became a constitutional monarchy 10 years ago, the index was written into the new constitution as a guiding principle of governance, one deeply rooted in Buddhism.

The country’s tourism council paints an image of a real-life Shangri-La, where visitors seeking a high-altitude paradise will find chiming bells, fluttering prayer flags, crimson-robed monks, staggering mountain views and one of the world’s most unspoiled cultures. 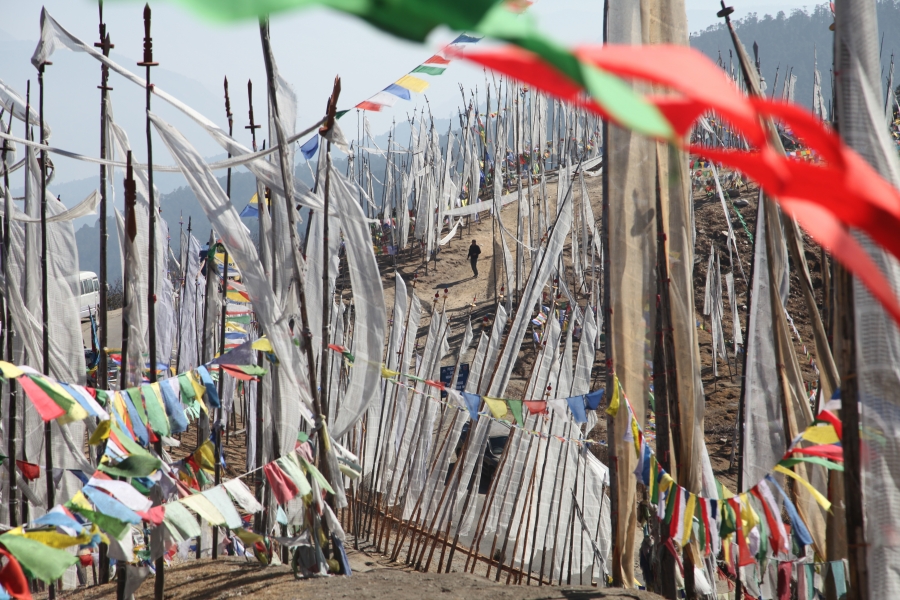 Prayer flags are seen at Chele La Pass. At 13,000 feet, it is the highest point accessible by road in Bhutan.

But this idealized view of Bhutan lies at odds with some realities. The country known as the world’s happiest — and the only officially Buddhist country on earth — had a suicide rate that measured at roughly 20th in the world, the nation's first comprehensive suicide survey found in 2014. It's impossible to say how much this has increased in recent years because the data wasn't tracked until that year. The country did not even get its first psychiatrist, Dr. Chencho Dorji, until 20 years ago.

What is clear is that Bhutanese identity has been undergoing a seismic shift as it is thrust into a modern age that is more connected, technologically speaking, but also more isolating. Together with high rates of alcoholism and domestic violence, this shift has created a mental health crisis in a country that is struggling to keep up, according to interviews with Bhutanese mental health professionals like Dorji — known as Dr. Chencho. Resources dedicated to mental health are stretched thin, and ingrained cultural traditions sometimes prove difficult to overcome.

“Even in far-flung villages they have television access,” Dr. Chencho says. “You can imagine, social media is everywhere. So things have changed so much especially in the last 10 years. Just …” He pauses. “Too fast, I suppose.”

But a movement is afoot to bridge the disconnect between reality and Bhutan’s lofty happiness goals. It’s a broad web of efforts involving people committed to promoting awareness, education, rehabilitation, spirituality and medication.

Jurmi Chhowing intimately knows the effects of these battling cultural forces. As a young man in the mid-90s, the sleepy pace of life in Thimphu, Bhutan’s capital city, made him restless. He became obsessed with death while reading texts like the "Tibetan Book of the Dead."

At 26, he took the rope with which Bhutanese men hold their national dress, the gho, to hang himself from the ceiling.

“Thankfully, I had a girlfriend at the time who happened to knock on the door and heard no answer and panicked," he says. His girlfriend and a few others crashed into the room and saved his life. "I owe them a big debt of gratitude,” he says.

Now, Chhowing is an author who recently published a book of poetry called, "Ballad of a Minor Man in a Major Chord.” The wit and self-deprecation in that title speak to a man who has been through dark times but came out on the other side.

Suicide violates the first precept of Buddhism — “Do not kill”— and it is believed that the act has consequences that will reverberate through the afterlife, but this didn’t register with Chhowing at the time.

"I didn't plan it,” he says. “I didn't sit down and think, 'I want to end my life because none of it makes sense and there's no meaning to any of it.' Mine was, I think, a pathetic, ignorant state of abject hopelessness.”

Chhowing spent a few months at his parents’ house in Samtse district, walking through the orchard and listening to Leonard Cohen until he felt ready to go back to his life. At the time, there weren't many other resources he could have turned to.

Chhowing didn’t know it, but his brush with death happened at a pivotal moment for Bhutan’s collective mental health.

It was 1999, the same year two things happened that would define Bhutan’s mental health landscape for years to come. One was the legalization of television and the internet — that’s right, only in 1999 did television begin broadcasting here (the hermit kingdom only began modernizing in the 1960s). It’s hard to overstate the impact of this sudden incursion of globalization into people’s homes. Dr. Chencho says it only amplified the restlessness many people already felt.

The other significant event was the arrival of Dr. Chencho himself. 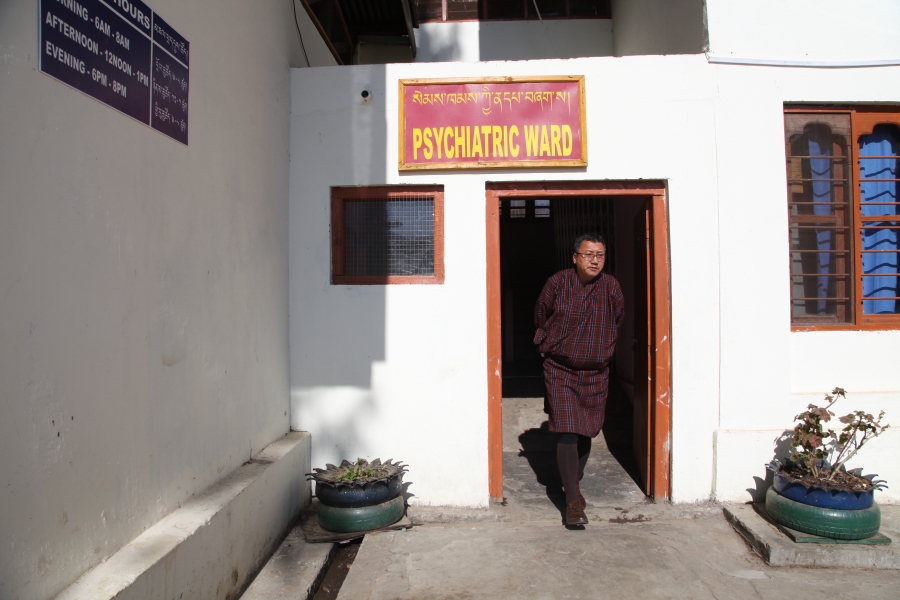 Dr. Chencho Dorji leaves the psychiatric ward in Thimphu after doing his weekly rounds. Bhutan still has only the single ward, with 18 beds.

He was hired as Bhutan’s first, and for a long time only, psychiatrist after leaving Bhutan to get his degree in Sri Lanka. Initially driven by a desire to treat his brother, a Buddhist monk who suffers from schizophrenia, he single-handedly spearheaded the creation of his country’s first psychiatric ward in Thimphu. Later he began training doctors at the district level in basic mental health assessment and treatment.

“We have been trying relentlessly to educate our people, to inform our people on mental disorders and that there is treatment available now. We have been doing this very consistently,” he says.

Two more psychiatrists have joined him in staffing the ward in the years since it opened. But even in a country of 800,000 people, that isn’t nearly enough. Dr. Chencho is a few years away from retirement, and there isn't really anyone in the pipeline to replace him.

Seeking medical treatment for mental illness is a brand-new idea for many Bhutanese; most are more likely to complain of being afflicted by deities than depression and would rather visit a shaman than a psychiatrist. Those cultural factors present another challenge for Dr. Chencho. So he’s had to find creative ways to get his message out.

On Tuesdays, you can often find him in the recording studio of a local radio station, Radio Valley, doing one of his frequent guest spots on Bhutan’s new mental health radio talk show, Mind Over Matter Bhutan. The host, Namgay Zam, launched the show in October last year. Zam is a prominent local journalist who broke the story about the results of Bhutan’s first comprehensive suicide survey in 2014.

“The statistics were quite shocking,” she says. “It debunked a lot of myths, so we were thinking it’s more the urban population and children whose parents were not together who were more affected, then we realized it’s actually the illiterate men who are older than 35 who were killing themselves; they were the highest.” 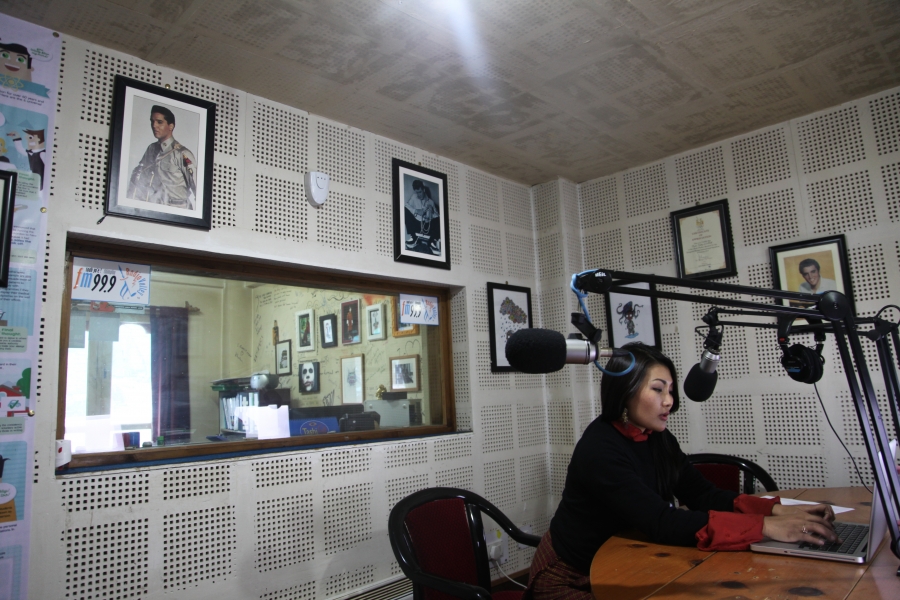 Namgay Zam prepares to record an episode of Mind Over Matter Bhutan in the studio at Radio Valley in Thimphu.

Her research on the story, and the back-to-back suicides of two people close to her family, made her realize how great a need there was for public engagement around mental health, so she worked with Radio Valley to launch the show. Guests have also included psychological counselors, an LGBT person, a wellness specialist, and suicide survivors, including Chhowing. The station only broadcasts to the greater Thimphu area and online, reaching an audience of mostly literate young people.

But Zam wants to do more.

“There’s no vocabulary in [Bhutan's official language of] Dzongkha to really discuss mental health like we would,” she says. “You can say you’ve experienced depression and anxiety in English — now, how do you translate this into Dzongkha? If you translate it, it’s like, 'you’re mentally ill.' That’s it. There’s no way to describe it further.”

"So I was saying to Dr. Chencho, the people we need to reach are the ones who don’t understand English. So it’s going to happen soon, I think maybe in a year or so, then we will start catering to that audience as well and using social media platforms to get to them," she says.

Another gap that needs to be filled is social work, a role that has always been filled informally by friends and neighbors in Bhutan’s collectivist society. But a new standardized program in social work is set to launch at the Royal University of Bhutan in 2019.

It will be modeled on similar programs in other countries, but with a Bhutanese twist: it will be grounded in the philosophy of Buddhism.

This reporting was made possible by a grant from the International Reporting Project.