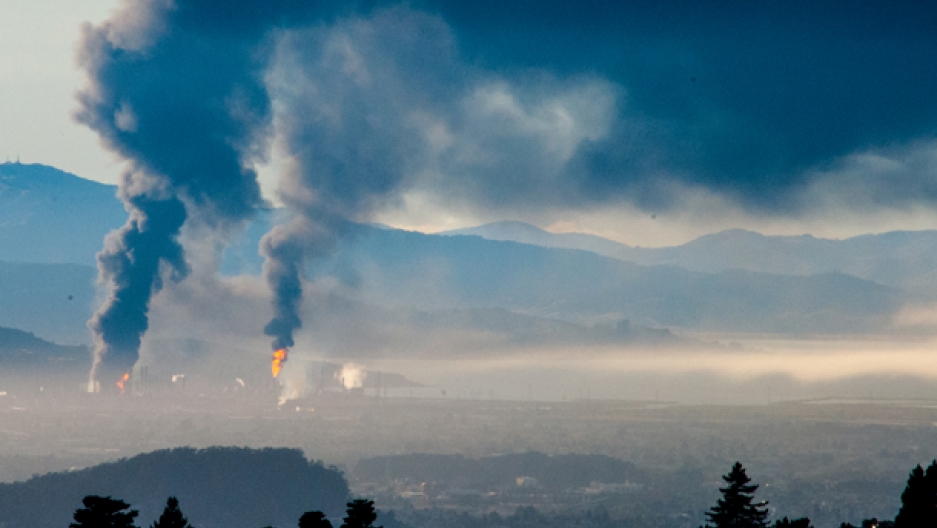 Chevron is among the list of defendants in the California cases. Above, the Chevron Richmond oil refinery in Richmond, CA, which caught fire in 2012, is located in the middle of the San Francisco Bay Area.

A growing list of US cities and counties are suing fossil fuel companies for damages linked to climate change.

Among the defendants are Shell and ExxonMobil. Emerging evidence suggests that these companies understood the warming effects of greenhouse gas emissions decades ago, yet engaged in a massive campaign to persuade the public otherwise and to discredit the science.

The plaintiffs want these companies to pay for some of the infrastructure needed to protect against floods and other climate-related disasters.

UCLA law professor Ann Carlson says there is some significant new information that makes these suits more likely to succeed than in the past. First, the science connecting the defendants' actions to the effects that cities and counties are experiencing — including sea level rise and other harms from climate change — is much stronger than it used to be.

Second, she says, “there’s really good information that the defendants knew about the harms of climate change long ago, as early as the mid-1960s, planned their own business operations around rising seas and other harms from climate change, and yet engaged in a campaign to try to mislead the public about whether climate change was actually occurring.”

From a liability perspective, this is important, she notes, because in California, where the vast majority of the lawsuits have been filed, the plaintiffs are bringing them under a doctrine known as Public Nuisance.

“California courts have made clear that when defendants in nuisance litigation are engaged in campaigns to try to mislead consumers about the harms of their products or to try to persuade the government not to regulate those harms, that makes a difference for determining whether the defendants are going to be held responsible for what they did,” Carlson explains.

The defendants’ principal argument, Carlson says, will be that they only pull the oil out of the ground; they don't burn it. Since it’s the burning of fossil fuels that creates the emissions that are warming the planet, they plan to argue that they're not the cause of the harm.

Instead, Carlson predicts, they will say “they sell their products and consumers combust the fuel when they drive cars or when they turn on the lights in the house, etc. They will have a bunch of other ways of trying to get the cases dismissed, but I think that's going to be their main argument.”

The tobacco industry used this tactic in lawsuits against them and it didn’t turn out so well, Carlson notes. “The tobacco industry said they weren't causing harm; it was the consumers who were smoking the product causing the harm. Eventually, the plaintiffs learned…the tobacco companies were engaged in very extensive campaigns to try to get smokers to smoke, and, not only that, to get them addicted to cigarettes through nicotine.”

Similarly, she says, oil companies clearly engaged in public campaigns to get people to use their products and to persuade them there was no harm. They ran advertisements about how carbon dioxide was actually good for the planet and alleged scientific uncertainty about whether humans were causing climate change. They even funded scientists to try to produce studies that cast doubt on whether climate change was occurring.

All the while, these companies were planning their own construction and development based on the dangers posed by rising sea levels.

“The evidence that Exxon, and the oil industry more generally, knew about climate change, changed their business plans as a result and then engaged in a campaign to dissuade the American public that climate change was happening and to try to persuade regulators not to regulate greenhouse gas emissions is key to the cases,” Carlson says. “There's no way you can look at some of the internal documents that have already been uncovered from Exxon and the American Petroleum Institute and not think that their behavior was really problematic. I think that's really going to matter in these cases.”

In an unusual twist, the judge on the federal case, William Alsup, called for a hearing that would consist of a climate science tutorial. He asked the plaintiffs and the defendants to educate him about a number of important scientific components of climate change, Carlson says. Notably, during this hearing the defendant oil companies all admitted that humans cause climate change.

Carlson is not sure this admission can be used as evidence once the case gets to trial, but she believes "it is a really important part of the record to get the defendants to say up front, ‘We're not going to argue about whether climate change is occurring. We agree that it's occurring and we agree that humans are helping to cause it.’ Now, we're going to move on to the next question, which is what is the defendant's responsibility for the harm, not whether the harm is actually occurring.”

Editor's note: A previous version of this story stated that Chevron knew about the warming effects of greenhouse gas emissions decades ago. In an email to PRI, Chevron Senior Advisor for Corporate Issues, Litigation and Financial Communications Sean Comey wrote,"Chevron is aware of no such evidence."