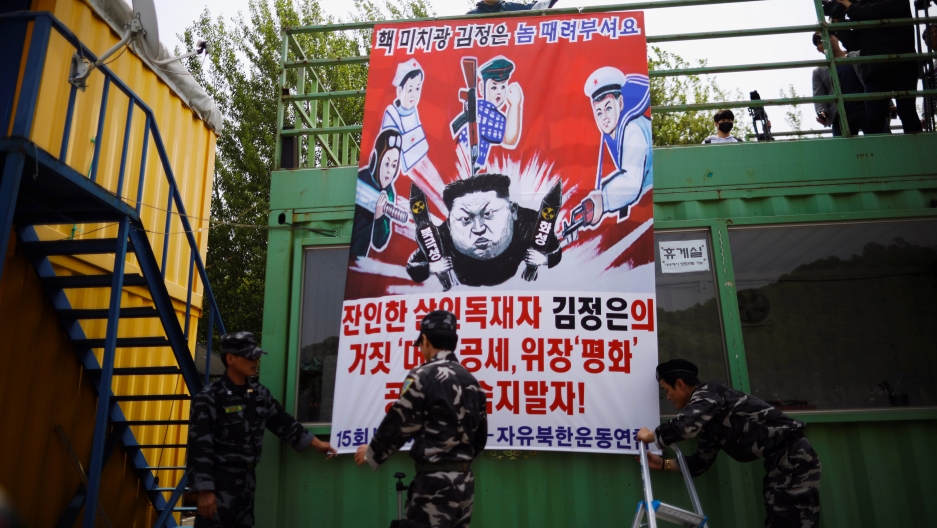 Days after a historic inter-Korean summit, Lee Min-bok, a defector who has been flying anti-Pyongyang leaflets into the North for 15 years, received a call from an official at Seoul's Unification Ministry urging him to halt his balloon campaign.

It was a plea by South Korea not to jeopardize the recent thaw, engineered by the leaders of the two Koreas who agreed during last week's summit to cease all hostile acts along the border — including the distribution of leaflets — from May 1.

On Saturday, police prevented a planned release of balloons by a defector group after a confrontation with anti-leaflet protesters.

For Lee, the campaign is personal. He says reading such leaflets as a young man in the North brought an "awakening moment" in 1990 that helped him realize how oppressive and destitute his homeland was at a time when the South was emerging as an economic powerhouse. In 1995, he escaped to South Korea.

"I really believed that Kim Il-sung was the center of the world and he was making everything right and great for us," Lee said, referring to North Korea's founding father, the grandfather of current leader Kim Jong-un.

"Realizing what I had learned, heard and read were all lies, I decided to defect to the South to live with the truth."

Lee, who launched his first batch of balloons in 2003 and has since dispatched more than 300 million, runs one of several defector-led civic groups that regularly send leaflets across the border carrying messages critical of Kim and human rights abuses in North Korea.

Their campaign now poses a thorny dilemma for Seoul, which is striving to keep up the momentum for inter-Korean reconciliation after a decade of confrontation amid the North's growing nuclear weapons and missile programs.

Pyongyang has in the past blamed Seoul for failing to stop previous leaflet launches, calling them "an act of war". The two Koreas even traded fire in 2014 after the North's military shot machine guns at balloons launched by defector activists.

In the call from the Unification Ministry, the official repeatedly pleaded for an end to balloon launches, promising support if his group switched to other activities aimed at improving human rights in North Korea, according to Lee.

The ministry was not available for comment on the call, but on Friday it issued a statement urging civic groups to halt leaflet launches, which it said would violate the spirit of the agreement made at the summit and heighten military tensions and safety concerns.

Some South Koreans also think the balloon campaign should end.

"Customers stopped visiting our town after North Korea threatened to shoot the balloons," said Kim Hyung-do, who runs a chicken soup restaurant in the border city of Paju.

"The mood between the two Koreas has a big impact on our lives. I hope they won't send flyers and throw cold water on this good mood after the summit."

Despite the pleas, a group of North Korean defectors flocked to Paju on Saturday to fly balloons into the North.

"We are carried away by Kim Jong-un's sudden deceitful peace offensive, but just a while ago he blackmailed us and the whole world with nuclear and missile provocations, while killing his own family members and executives," Park said.

About 150 residents of Paju and members of a small, progressive party staged a protest against the leaflet launch, and one protester ran into Park as he gave a speech, prompting police to intervene.

"I risked my life to cross the border. You can't stop me," a colleague of Park furiously shouted at the man, drawing applause from other defectors.

The launch was eventually called off as police blocked the truck carrying the balloons from entering the site. Local police were not immediately available for comment.

The two Koreas have waged rival leaflet campaigns for decades.

The South's military used to launch anti-North flyers across the demilitarized zone, but the program ended in 2010, a defense ministry official said.

Pyongyang has also used balloons to send its own propaganda leaflets, which typically feature military threats and satirical images of South Korean and U.S. leaders.

"I remember picking up fliers praising Kim Il-sung from the playground and mountain near my home when I was in elementary school, and we were told to drop them at a police box and get pencils as a reward," said Kim Chang-hwan, a 35-year-old book editor in Seoul.

"It was sort of scary as we were taught that those things were very bad, but when I saw them again during my military service, I would just laugh it off."

Defector and human rights campaigners say the South Korean government cannot obstruct civilian activities that they say are subject to freedom of speech guaranteed by the constitution.

In 2015, a local court dismissed a lawsuit filed by a group of residents to prevent Park's leaflet campaign, citing freedom of expression.

But in a separate 2016 case, the Supreme Court ruled the government could limit the civic group's activities due to residents' safety concerns.

President Moon Jae-in, a former human rights lawyer, took office last May, pledging to re-engage the North. As an opposition lawmaker, Moon co-sponsored a resolution calling for a halt to leaflet launches in 2014.

"The agreement from the summit doesn't have binding authority over what the people do or don't do," said Kim Tae-hoon, a member of Hanbyun, an association of lawyers for human rights and unification. "And it can't undercut the universal value of human rights."