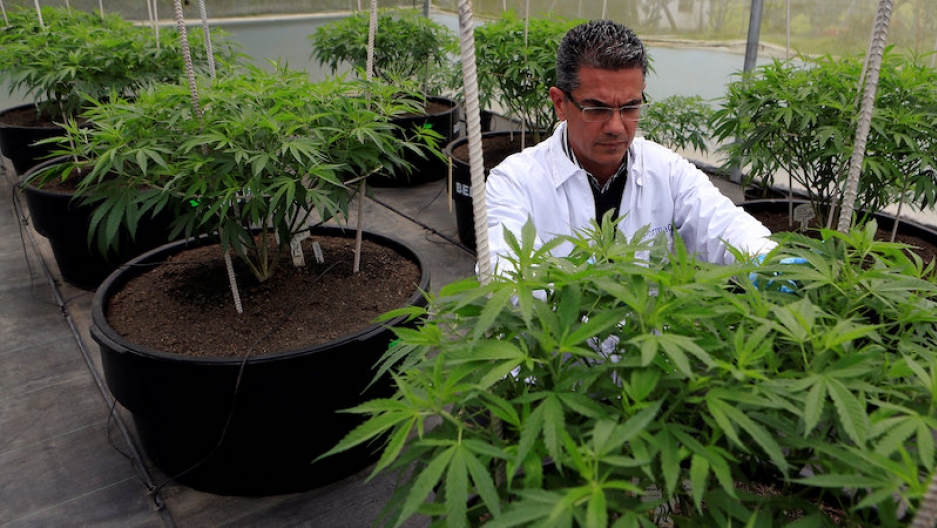 Tired of living in fear of arrest or running afoul of drug traffickers, Romairo Aguirre is ready to destroy his illegal plantation of 1,500 marijuana bushes in the mountainous Cauca region of southwest Colombia and become legitimate.

Like many of the farmers who grow cannabis near the town of Corinto, Aguirre hopes President Juan Manuel Santos' plan to turn Colombia into a major producer of medical marijuana means he can find work from one of a dozen companies launching in the South American nation.

Santos — who leaves office in August — passed a law two years ago legalizing medical cannabis for domestic use and export. It aims to take the marijuana trade from the hands of Marxist rebels and traffickers, transforming Colombia into a multibillion-dollar producer for the pharmaceutical industry.

"We're just realizing marijuana's potential. It could be the next economic bonanza — like coffee was," said Aguirre, 61, before a man and a woman arrived at his farm to buy sacks of dried cannabis buds.

"I could go to jail for this but that won't happen if I'm working in medicinal."

Farmers who want to be part of Colombia's medical marijuana project are required to destroy their illegal crops.

Colombia has already issued 33 licenses and hopes to grow as much as 40.5 tons a year of medical marijuana — accounting for roughly 44 percent of licenses issued globally.

So far, however, the government has authorized production of seeds and marijuana only for scientific research, not for commercial production of medical cannabis.

Andrés López, head of Colombia's National Narcotics Fund that oversees use of legal narcotics, said it was putting in place its team to regulate the industry. The new law calls for rigorous testing to prevent illegal cannabis from entering the medical market.

In time, growers estimate that the Andean nation could capture as much as one-fifth of a global market that could be worth $40 billion a year — a significant economic boost as Colombia seeks to diminish its reliance on dwindling oil reserves.

That would be more than coal exports, and also more than exports of flowers, coffee and bananas combined.

"Colombia's betting on diversification of exports, of its portfolio and this is one of the most aggressive ways," said Rodrigo Arcila, head of the cannabis growers association.

The new industry will not produce smokable marijuana but focus on oils, creams and inhalers produced in laboratories and personalized by prescription to each patient, he said.

Growers say that production would be enough to treat pain and symptoms of some 4.5 million patients nationally and 60 million in Latin America suffering from conditions such as cancer, multiple sclerosis and epilepsy.

With the United States — historically the main market for its illegal marijuana — closed to medicinal imports, Colombia will look to Latin America for sales, Arcila said. Countries including Mexico, Peru and Argentina have legalized its medical use.

Some on the political right in Colombia, including former Public Prosecutor Alejandro Ordóñez, have opposed the legalization on the grounds it sends the message marijuana is good for your health and could lead to a full legalization of the drug.

Federico Cock, head of Colombia-Canadian-owned Pharmacielo, agrees, but says — in a country where marijuana has long fueled violent crime — that may not be a bad thing.

"We'll go from a bad, negative history to developing a product that destigmatizes the history of Colombia and our sad past," said Cock, standing among rows of cannabis bushes at a plantation near Medellin — where Pablo Escobar ran his drug trafficking empire in the 1980s.

Pharmacielo, which has a 12-hectare operation in Rionegro, was the first company to receive a license in Colombia and Cock hopes to start commercial production by the end of the year — if the government gives final approval.

With banks reluctant to lend to the nascent industry, Pharmacielo is in the process of listing on the Toronto stock exchange, pending regulatory approval.

Canada, already at the forefront of the medical cannabis industry, is due to legalize recreational cannabis this year. It will be only the second country to do so, after Uruguay.

While Colombia is several years behind Canada, its lower cost of production due to its less seasonal climate gives a competitive advantage that makes it attractive to investors.

"The dollars required to fund this are massive," he said.

Vice Trade Minister Olga Lucía Lozano said the windfall for Colombia could be massive, recalling that its flower industry also began as a collaboration between scientists and farmers and is now the world's second-biggest exporter.

"Drugs have caused more pain than anything else — I have seen friends die," she said. "But on those ashes we'll build a new industry."

Representatives for the leading candidates in the May 27 presidential election — including right-wing frontrunner Ivan Duque and his leftist rival Gustavo Petro — did not respond to requests for comment on their policies on medical marijuana.

Pharmacielo, which has a four-hectare pilot project in Corinto, said it can employ about 18 farmers in each hectare, but since the government stipulates that it must provide farmers with a minimum of 10 percent of the total productive land, the farmers have only half a hectare. That's cause for some skepticism.

"We've been offered false hope," said Héctor Sánchez, who destroyed his marijuana plants to be part of a medical cooperative and is still waiting to start work. "If growers can't be involved, they'll just go back to marijuana."

To create their own medical marijuana business, the farmers would need at least $20 million a year — in laboratory equipment among other costly scientific technology — an amount far from reach.

It could create far more jobs than nearby sugar plantations, which employ just one worker for every eight hectares, he said.

"The companies should dedicate themselves to the products, to extraction, but let the crops come from the farmers," he said in his office in the town square. "They're missing an opportunity."