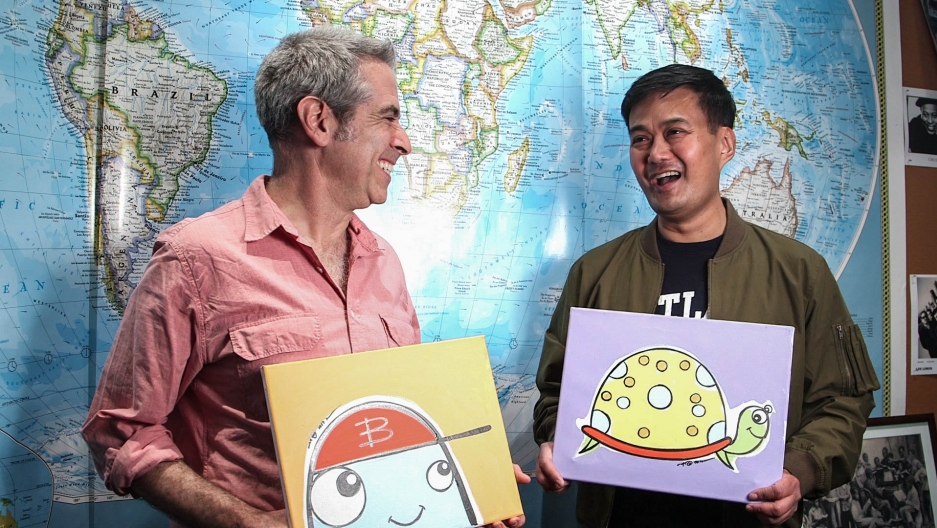 The World host Marco Werman (left) with artist Bren Bataclan. Bren gave away these paintings to two people after they posted their "random acts of kindness" on the World's Facebook page.

Boston artist Bren Bataclan often gives away his paintings with a note asking people to "smile at random people more often." He gave us two to give to PRI listeners and readers. Bataclan selected two people who commented on PRI The World’s Facebook page about the random acts of kindness they did for others or someone had done for them.

The responses we got on Facebook were often heartwarming. Here's one from the runner-up of the contest. Her name is Mandy Henderson Burgess and she's from Santa Barbara, California.

"I am so happy to have listened to the World today to discuss random acts of kindness!!" Henderson wrote on Facebook. "Last week as I walked along the bluffs which overlook the Pacific Ocean near my home in California, I struck with such gratitude. I wondered how I could share this moment with someone totally not expecting it. I had recently painted the exact scene I was looking at with my kids, so I picked a wild mustard flower which is currently growing and filling the entire bluff top, and went home and found a random address in Alabama. I wrote a little note on the back of the painting asking to spread joy, compassion and kindness if they could. I sent it with no return address and hope I put a smile on someone's face. My goal is to send random artifact to someone in all 50 states."

Bataclan really enjoyed reading all the posts on our Facebook page, commenting and liking but what drew him to our social media channels in the first place was seeking out people who were touched by a genuine human connection. "I would love to hear back from a person who's, like, found that random art in that mailbox. It's wonderful."

Bataclan started his "random acts of kindness" when he moved from Ohio to Cambridge, Massachusetts. Originally from San Francisco, he says he was "friendly and always making eye contact," but noticed people in Boston weren't really responding to his politeness.

"So I said, 'You know, I will do my own street art project to spread more smiles around Boston.'"

That was 15 years ago. Since then, he's given away more than 3,000 paintings — not just in Boston, but all over the globe. He recently gave away one of his paintings to a woman in Aruba.

So, who were the two lucky people that will receive one of Bataclan's paintings and what were their "random acts of kindness"? The first winner is John Stewart from Salt Lake City, Utah, who works as a professional Santa, a job that can often be thankless and taxing. His goodwill extended beyond the North Pole when this happened:

"One year, I finished up a private party at a family's house. It was a lot of fun, and at the end, the parents gave me a Christmas card containing my fee. Once I got home, I opened the card and discovered that they had paid double my normal rate. It was very nice of them. Later, I went to dinner with a friend at a restaurant. She was asking me about being Santa, and I told her I always loved when the older kids at the party would not let on to the younger kids. They played along and made it fun for everyone. The waitress overheard and told us that she had to tell her young son the truth about Santa this year. I asked her why, and she said that because she had just finished a round of chemotherapy for cancer, and this was her first day back to work, and Christmas was not going to be like it had been in previous years. Like a shot of lightning, the universe was giving me a message. I gave the waitress the extra money that the family had given me. I told her Santa always made sure kids had a good Christmas."

You'd have to be pretty tough not shed at least one tear over that story. "A few hankies were needed to get through some of these stories," Bataclan said when he read what people posted.

The other "random acts of kindness" winner is Ruth Deakins. She befriended a homeless man in San Diego and posted this:

"I've gotten to know him over the years. While talking to him recently, he told me he was married at one time and has a grown son and a daughter who died in her 30's. I asked him if he had worked during his life. He said he had for many years and once owned a home. He's now 70 years old. I asked if he would qualify for social security. He said he does, but he didn't know how to apply. He knows his social security #, but doesn't remember much else about his life; i.e., addresses where he once lived, etc. I think he may be in early dementia. He's all alone now and has no connection with his family. I took him to the social security office and spent the day there in the lines. At being 70 years old, turns out that he could collect $1,600/month in social security benefits. That would be life-changing for him, but he has no documentation that he is a legal citizen in the U.S.; therefore, he will not receive the money. He said he came here from Mexico when he was four years old, but has no documentation that he can remember obtaining. He may be a legal citizen, but he just doesn't know."

That story really resonated with Bataclan. "As an immigrant, I know folks who have similar challenges. I just really felt for that guy and the woman who's helping him."

If you want to read more random acts of kindness, grab a box of tissues and head over to The World's Facebook page.

Editor's note: An earlier version of this story misspelled John Stewart's name. Bren Bataclan went to college in Ohio, but was born in the Philippines and grew up in San Francisco.