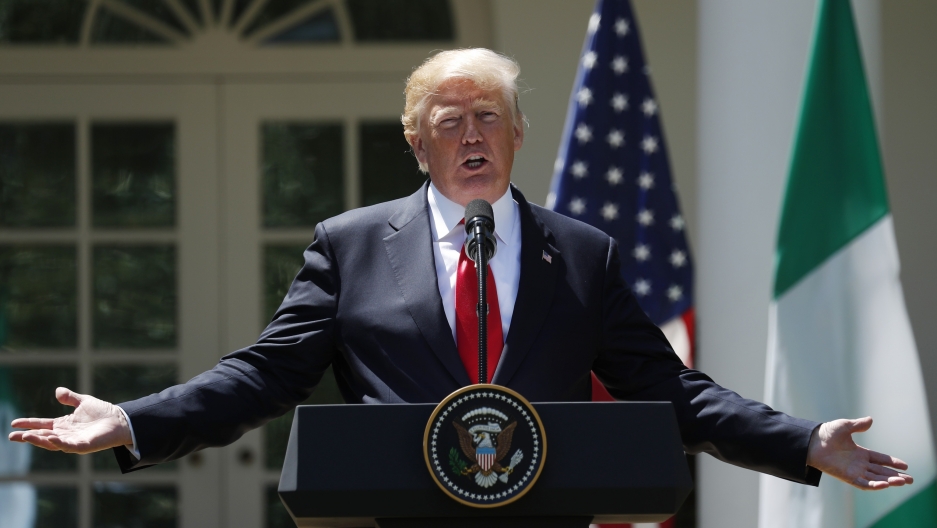 President Donald Trump speaks during a news conference in the Rose Garden of the White House.

Two White House officials told Reuters Wednesday that President Donald Trump has all but decided to withdraw from the 2015 Iran nuclear accord.

Exactly how Trump plans to pull of international deal remains unclear, the officials and a source familiar with the administration's internal debate said.

There is a chance Trump might choose to keep the United States in the international pact under which Iran agreed to curb its nuclear program in return for sanctions relief, in part because of "alliance maintenance" with France and to save face for French President Emmanuel Macron, who met Trump last week and urged him to stay in, the source said.

A decision by Trump to end US sanctions relief would all but sink the agreement and could trigger a backlash by Iran, which could resume its nuclear arms program or "punish" US allies in Syria, Iraq, Yemen and Lebanon, diplomats said.

Technically, Trump must decide by May 12 whether to renew "waivers" suspending some of the US sanctions on Iran. One of the White House officials who spoke on condition of anonymity said it was possible Trump will end up with a decision that "is not a full pullout" but was unable to describe what that might look like.

A presentation by Israeli Prime Minister Benjamin Netanyahu on Monday about what he said was documentary evidence of Tehran's past nuclear arms program could give Trump a fresh argument to withdraw, even though UN inspectors say Iran has complied with the terms of the deal.

Iran has denied ever seeking nuclear weapons and accuses its arch-foe Israel of stirring up world suspicions against it.

The pact between Iran and six major powers — Britain, China, France, Germany, Russia and the United States — was among former US President Barack Obama's signature foreign policies but has been described by Trump as "one of the worst deals I have ever witnessed."

The White House official said Trump was "most of the way there toward pulling out of the deal but he hasn't made the decision" and that he "seems poised to do it but until a decision is made by this president it is not final."

Top aides are not seeking aggressively to talk Trump out of withdrawal because he seems intent on it, a second White House official said.

Trump gave Britain, France and Germany a May 12 deadline to fix what he views as the deal' — its failure to address Iran's ballistic missile program, the terms by which inspectors visit suspect Iranian sites, and "sunset" clauses under which some of its terms — or he will reimpose US sanctions.

While European officials continue to work toward such a "fix," they believe the odds are against reaching one.

One of the main sticking points has to do with the "sunsets," where the United States in effect wishes to find a way to extend some of the limits on Iran's nuclear program beyond their expiration dates under the agreement.

The source familiar with the debate said US negotiators are hamstrung by the fact that they do not really know where Trump's "red line" is and so they cannot tell the Europeans what would secure Trump's blessing.

Trump could refuse to renew the waivers but give new Secretary of State Mike Pompeo time to negotiate more with the Europeans, exploiting the deal's dispute resolution mechanism or the time before the most draconian sanctions take effect.

Several sources familiar with the negotiations said that if Trump pulls out, a question for the Europeans will be whether this would be the start of a much harder US line toward Iran, including military confrontation.

"The Europeans are not keen to be dragged into a regional conflict by the US," said one source familiar with the talks.

Two US intelligence officials said they were particularly concerned about Iranian retaliation in harder-to-trace actions such as cyber attacks on the United States or its allies and attacks on soft targets by people without obvious ties to Tehran.

Such attacks are considered more likely than actions that might trigger a US military response against Iranian nuclear and military targets.

By Steve Holland and Arshad Mohammed/Reuters