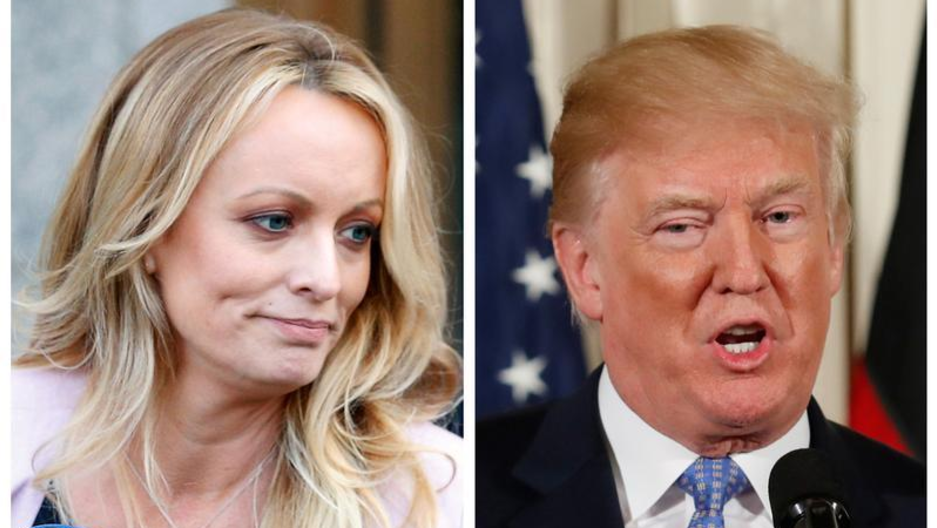 What are the facts?

In October 2016, shortly before the presidential election, Trump’s private lawyer, Michael Cohen, used a newly established limited liability company to quietly pay an adult film star $130,000. In exchange, the woman, Daniels — real name Stephanie Clifford — agreed not to discuss an alleged sexual relationship with Trump, who denies having an affair with Daniels.

The payments and the agreement were first reported by The Wall Street Journal. Daniels sued in March to get out of the agreement, arguing it is not valid because Trump did not sign it. She has also sued the president for defamation.

Trump initially denied knowledge of the payment to Daniels and the source of the money used to pay Daniels, referring questions to Cohen. Government watchdogs argued the payments to Daniels were meant to influence the 2016 presidential election and, therefore, should have been publicly disclosed.

The president and his representatives have offered sometimes contradictory narratives about the payments, what the president knew and when and the circumstances surrounding them.

Most recently, in an interview with Fox News’ Sean Hannity on Wednesday, former New York City Mayor Rudy Giuliani, one of the president’s lawyers, said the president personally repaid Cohen for the payment to Daniels. Giuliani also said: “Imagine if that came out on Oct. 15, 2016, in the middle of the, you know, last debate with Hillary Clinton … Cohen didn’t even ask. Cohen made it go away. He did his job.”

Watchdogs say the payment was meant to influence the 2016 presidential election, and Trump’s campaign committee violated the law by failing to report the expenditure as a campaign expense.

In addition, since Cohen initially said he paid Daniels out of his personal funds, a complaint from nonpartisan government reform organization Common Cause said the money should have been reported as an in-kind contribution to the campaign, in which case it would have been illegally large. (Individuals may give a political candidate no more than $2,700 per election.)

“The repayments took place over a period of time, probably in 2017, probably all paid back by the end of 2017,” Giuliani told The Washington Post. “That and probably a few other situations that might have been considered campaign expenses.”

Trump can legally contribute unlimited amounts to his own campaign, but the money must be disclosed on campaign finance reports.

Stephen Spaulding, chief of strategy and external affairs for Common Cause and a lawyer who once worked at the FEC, said Giuliani’s comments constitute “a bald-faced admission.”

“This was a potential knowing and willful violation of campaign finance laws,” he said, pointing especially to Giuliani’s comment about the news of the Trump-Daniels situation potentially breaking days before the presidential election on Nov. 8, 2016.

Why does Trump maintain he’s not violated campaign finance laws?

In three tweets Thursday morning, Trump contended that the $130,000 payment to Stormy Daniels was a “private contract between two parties” and “very common among celebrities and people of wealth.” He argued that Cohen, who facilitated the transaction with Daniels, “received a monthly retainer, not from the campaign and having nothing to do with the campaign.” Trump later underscored that “money from the campaign, or campaign contributions, played no roll [sic] in this transaction.”

It may also be difficult for government investigators to prove whether Trump’s payment to Daniels constituted a campaign contribution in any way, said Brad Smith, a former FEC chairman and president of pro-campaign deregulation organization Institute for Free Speech.

He added: “The consequences of expanding the idea of ‘campaign contribution’ to anything that might indirectly help with the public perception of a candidate are, I think, not pretty.”

Which government agencies are investigating?

In January, Common Cause filed twin complaints with the Federal Election Commission and Department of Justice, naming Trump, Trump’s presidential campaign, the Trump Organization, Cohen and Essential Consultants LLC, the Delaware-based limited liability company through which Cohen made the $130,000 payment to Daniels.

The six-member, bipartisan FEC is the nation’s civil enforcer of campaign finance laws, meaning any penalty it levies against a political actor or committee comes in the form of a fine that rarely exceeds five figures. It often takes many months, if not years, for the FEC to rule on a campaign finance complaint. Conceivably, Trump may not be president by the time the FEC rules. And because of ideological disagreements among commissioners, many high-profile FEC cases result in deadlocks or a failure to reach the four votes needed by law to make a formal ruling.

Trump also has personal sway over the FEC, as he, as president, is alone responsible for nominating commissioners to the agency. To date, two of the commissioner positions are vacant and the four others remain occupied by officials whose terms expired years ago. Trump has only nominated one person — Texas attorney Trey Trainor, who aided Trump’s presidential campaign during 2016 — to replace any of these “holdovers.”

The DOJ conducts criminal investigations of potential campaign finance violations. Like the FEC, it generally conducts its campaign finance-related investigations in secret. If the DOJ finds enough evidence against Trump, or his campaign, business or associates, it could present the evidence to a federal grand jury, which would determine whether anyone should be indicted — and put on trial. There’s also the issue of whether a president could even face a criminal trial while in office. Many constitutional scholars contend that the only remedy for laws broken by a president is impeachment by the US House.

It’s also conceivable that Special Counsel Robert Mueller, as part of his investigation into Russian interference in Election 2016, could probe Trump’s payment to Daniels. To date, there is no indication that Mueller has or will.

Either. Neither. Or both. Common Cause’s complaints target both men, and it’ll be up to the FEC and DOJ to determine who violated campaign finance laws — if there’s any violation at all.

What does former Sen. John Edwards, D-N.C., have to do with this?

Edwards, a former vice presidential and presidential candidate, was indicted in 2011 on charges of using illegal campaign donations to conceal his mistress from voters. The case involved nearly $1 million in payments from political supporters.

Prosecutors alleged the money represented illegal campaign contributions meant to preserve Edwards’ political viability. Edwards’ defense argued the money was a gift and the purpose was to conceal the affair from his wife.

The charges were controversial, and some experts said the Department of Justice shouldn’t have brought them. In that camp: then-FEC Commissioner Don McGahn, who is now Trump’s White House counsel.

The Edwards jury deadlocked on five out of six counts against him and found him not guilty of the sixth. The Justice Department decided against retrying the case. This case is now viewed as a potential precedent in the Trump matter, although the situations are not perfectly parallel.

Should Trump have listed the money owed to Cohen in his federal personal financial disclosure report?

Giuliani, in an interview Wednesday with The New York Times, said Trump personally paid Cohen “$460,000 or $470,000” after the 2016 presidential election in monthly installments —  both to reimburse Cohen for the $130,000 he fronted Daniels and “incidental expenses.”

Trump, on his signed 2017 personal financial disclosure, did not disclose a debt to Cohen or a Cohen-related entity, as described by Giuliani.

And former Office of Government Ethics Director Walter Shaub, now an attorney at nonpartisan government reform organization Campaign Legal Center, says Trump may have opened himself to civil or criminal penalties if he indeed filed a false personal financial disclosure.

Shaub also recalled how Trump lawyer Sheri Dillon, who could not immediately be reached for comment, asked if Trump could file his latest personal financial disclosure without certifying that the disclosure was true.

“I don’t know whether she knew at the time that he might be planning to conceal this payment — I hope not — but shame on her if she did,” Shaub said. “In any case, I’m glad I made him certify that his report was ‘complete and correct.’”

Dillon's law firm, Morgan, Lewis & Bockius LLP, released a one-sentence statement in response to an inquiry from the Center for Public Integrity: "Mr. Shaub’s speculation as to Ms. Dillon is baseless and an uncalled for personal attack on her."

The Center for Public Integrity is a nonprofit investigative journalism organization based in Washington, DC.

Editor's note: This story has been updated to include a response from Morgan, Lewis & Bockius LLP.