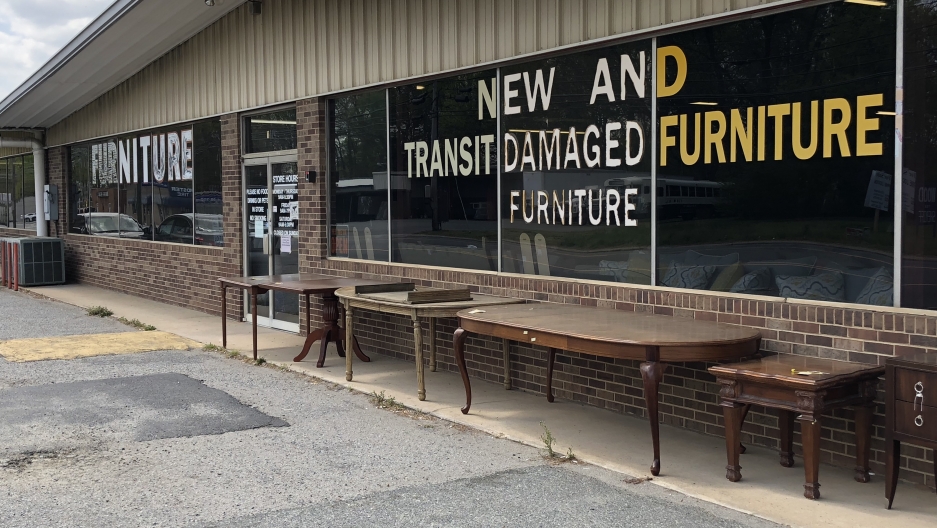 Since the turn of the 20th century, cities like Lexington, North Carolina were the furniture-making capitals of America. The area has lost 60 percent of of its manufacturing jobs, largely to Asian factories, since the 1990’s.

Hooker Furniture has been around since 1924, selling wooden furniture for the home — sofas, bed frames, dressers, you name it. Like many American furniture makers, Hooker located its factories in southern Virginia and North Carolina because of nearby supplies of Appalachian hardwood and cheap labor.

For more than a century, the area was the furniture-making center of America. By the late 1990s though, the model was crumbling.

“We closed five plants in about five years. We went from 2,200 employees to 200. These were good, hardworking people that were doing everything that we asked of them and it was through no fault of theirs. There was no other alternative. We sold furniture below what it cost us to manufacture it.”

And so, Hooker Furniture essentially became an importer.

Related: A small North Carolina city stakes its claim as the global capital of furniture buying

Toms shows his furniture twice a year at the High Point Market, the world’s largest home furnishings trade show, held in High Point, North Carolina. Outsourcing stories like Hooker’s are common around these parts — 60 percent of the furniture-making jobs in North Carolina have disappeared since 1990, gone to foreign factories.

Consider the case of a hand-woven rug to understand the math.

“A $5,000 rug that we sell, it literally takes about a year to make,” said Satya Tiwari, president of the Atlanta-based company Surya.

Tiwari did a quick calculation, how much it would cost to make that rug in the US with typical American salaries. “Basic math it will be $30,000 or $40,000, for sure.”

And that’s wholesale. Tiwari isn’t going to sell a lot of rugs at that price. 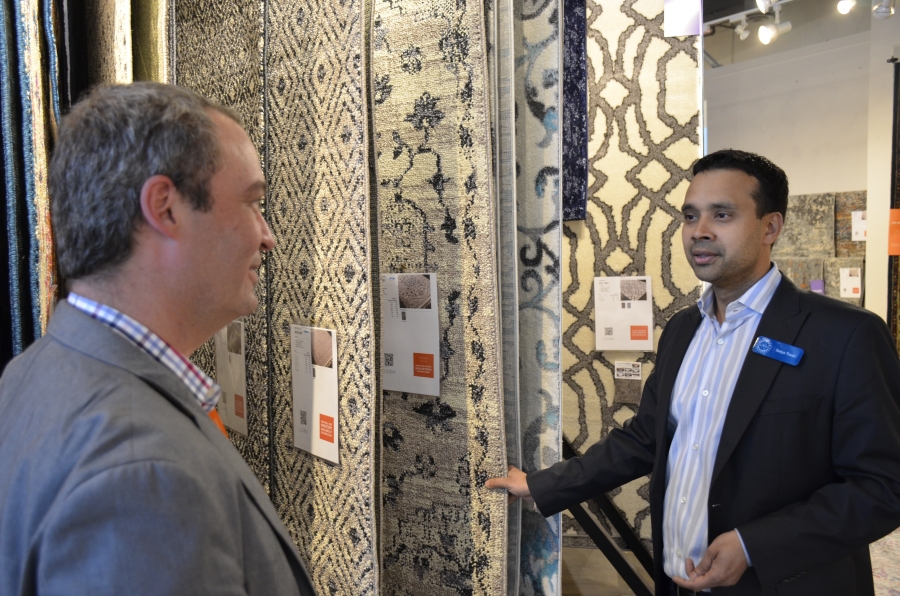 Satya Tiwari (right) president of the Atlanta-based company Surya, shows a rug to John Mulliken, the CTO of Wayfair, one of the world’s largest online sellers of furniture and home furnishings.

Chasing cheaper labor to build tables and chairs isn’t a new story. A century before North Carolina lost its furniture jobs to China, North Carolina was stealing them from Michigan. And before that, Michigan was taking jobs from New England.

But is there any way to make rugs, dressers or bed frames where people are paid more? Can benches and chairs again be built in America?

“I don’t see how the economics work anytime soon,” said David Bergman, CEO of the Butler Speciality Company, an 88-year-old business based in Chicago that designs things like benches, chairs, mirrors and consoles.

Butler outsources its manufacturing to Asian nations like China, Indonesia and the Philippines. But Bergman said manufacturing doesn’t only go where labor is cheap, it goes where there’s expertise. And right now, that’s in Asia.

Bergman said even if Butler could build benches cheaply in the US, it wouldn’t much matter — the factories and equipment are gone.

“Let’s say we have 50 different types of benches in our line-up, maybe 100, using 30, 40 different materials, it would be very difficult to find an assortment of factories in the United States that would be able to do that right now,” said Bergman. “Someday, certainly it’s possible.”

The White House is trying to make “someday” arrive more quickly for US manufacturing through tariffs, which make imports more expensive. Bergman says if President Donald Trump were to slap tariffs on furniture imports, it wouldn’t bring back American jobs.

“I think that I will be able to pass through the tariff to my customer,” Bergman said. “I think the consumer ultimately though is the one that's going to have to pay more for the product.”

For example, a $100 mirror slapped with a 25 percent tariff could cost consumers at least $125.

Yet, despite China’s huge costs savings on labor, some furniture is being built in North Carolina.

“You can do it here,” said Bill Wittenberg, CEO of Klaussner Home Furnishings. “It’s all made in North Carolina.”

He points to a sofa, the guts of which — cushioning, springs, and the frame — are largely imported, then put together in North Carolina on an assembly line. Then comes the customized part: upholstery is added to finish the sofa just the way the customer wants it.

“They want to pick a product that they have said, ‘OK, I’ve got this color scheme in my room, I want to put this fabric on it, or I want this type of cushion.’ They like to customize their product,” says Wittenberg. “And that’s where we’ve carved out our niche.”

That sofa ships to the customer in a few weeks. 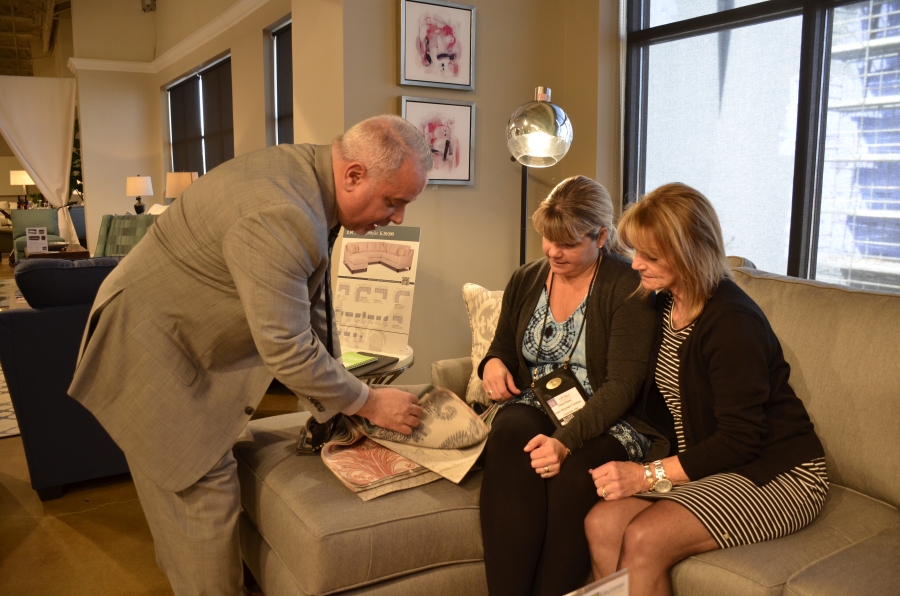 This business model — quick customization — doesn’t work as well from China. And so the upholstery business has become a bright spot for North Carolina. Local community colleges have started offering classes again in sewing and upholstery.

“After the economic downturn, some of the furniture-training schools actually got rid of those programs, and they’ve had to bring them back,” said Mike Hubbard, international trade director with the Economic Development Partnership of North Carolina. “In Catawba County, they’ve restarted it and have a three-year waiting list to get into it now because the work is there.”

“In domestic upholstery manufacturing, we probably have about 650 to 700 employees,” said Toms.

According to the Department of Labor, upholsters earn, on average, $17 an hour.

Still, Toms doesn’t oversell this comeback — he doesn’t see a return to the bustling days of furniture making in North Carolina.

“People ask all the time: Are jobs coming back? And my answer is, I don't think so,” said Toms. “The skills that are involved in domestic wooden residential furniture-making are, I think, for the most part, gone. The supervision is gone, the machinery is sold, environmental permitting would be extremely difficult today. I just don't see that business coming back.”

That point was echoed by pretty much everyone at the High Point Market.

Remember the old economic adage that furniture manufacturing always chases the cheapest labor? Even if North Carolina could compete with China, it wouldn’t much matter.

“Vietnam is getting big into this, Indonesia is big, Malaysia is becoming big. So it’s not just a China story anymore,” said Brun. “There are countries that target furniture as one of the ways that they see themselves participating in the global economy because it’s a relatively low-skill, high labor-intensive product that they think they can compete in.”

Still, Brun adds that North Carolina has something none of those places have: its market. “Whenever I speak to people about furniture in North Carolina, I say a lot of it offshored, but our crown jewel currently is the High Point Market.”

Downtown High Point, North Carolina. The city of 110,000 attracts nearly 80,000 visitors at its furniture show, which is held twice a year.