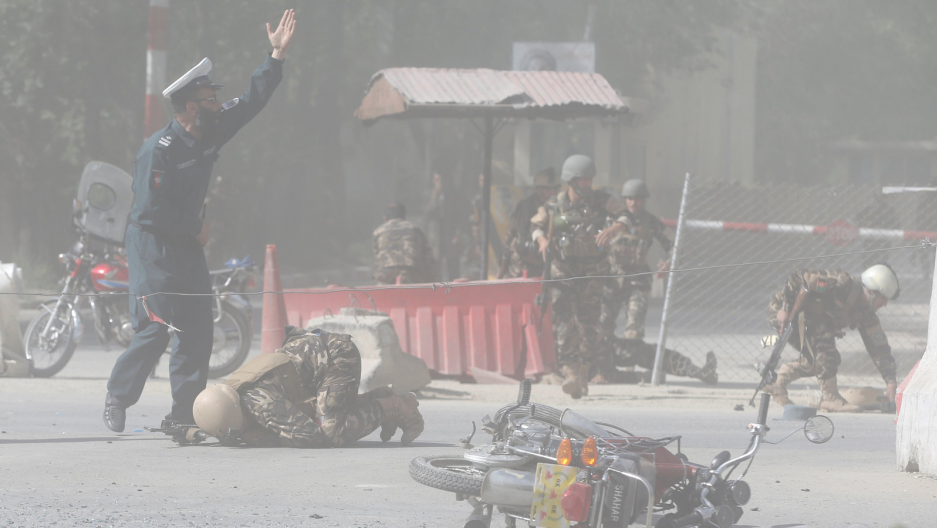 Afghan security forces are seen at the site of a second blast in Kabul, Afghanistan, April 30, 2018.

Twin blasts in the Afghan capital Kabul killed at least 26 people on Monday, including nine journalists who had arrived to report on the first explosion and were apparently targeted by a suicide bomber, officials said.

The attacks, a week after 60 people were killed as they waited at a voter registration center in the city, underlined mounting insecurity despite repeated government pledges to tighten defenses.

Hours after the attack in Kabul, a suicide bomber in a vehicle attacked a foreign military convoy in the southern province of Kandahar, killing 11 children studying in a nearby religious school, police said.

"I am furthermore outraged by the attack which appears to have deliberately targeted journalists," he said in a statement.

The attacks in rapid succession were a grim reminder of the strength of both the Taliban and Islamic State's emerging Afghanistan branch to wreak violence despite stepped up US air attacks under Trump's new policy for the 16-year-old war.

Taliban militants, fighting to restore their version of strict Islamic law to Afghanistan, announced their usual spring offensive last week and there has been heavy fighting in several areas of the country since.

Islamic State claimed responsibility for the two blasts in the capital, which killed at least 26 people, including four police, and wounded 49 seriously, Hashmat Stanekzai, a senior police official, said.

The Afghan Journalists Safety Committee (AFJSC) said nine journalists were killed in Kabul, the worst toll for media workers in a single attack in the country.

Najib Danish, a spokesman for the interior ministry, said a suicide bomber appeared to have posed as a media worker and blew himself up where reporters and rescue workers had gathered.

"We know that a suicide bomber pretended to be a reporter. He showed his press card and stood among journalists before blowing himself up," Danish told Reuters.

Afghanistan was already considered one of the most dangerous countries in the world for journalists, with at least 20 killed last year. Last week, unidentified gunmen shot a journalist in the southern city of Kandahar.

Monday's attack was the most serious on the Afghan media since 2016, when seven workers for Tolo News were killed in an attack claimed by the Taliban.

Eight of the journalists were from Afghan outlets: two reporters from the Mashal TV, a cameraman and a reporter working for 1TV, three reporters from Radio Azadi and one from Tolo News, the AFJSC said.

A Reuters photographer was slightly hurt by shrapnel.

"Journalists were doing their job when a suicide bomber killed them, such attacks prove that the working environment is very dangerous now," said Rahimullah Samandar, a senior member of the AFJSC.

The reporters had arrived to cover the initial blast in the Shashdarak area close to buildings of the National Directorate of Security (NDS) intelligence service and near to the US embassy.

Held back by police, they were waiting some distance away near the Ministry of Urban Development and Housing, when the second explosion went off just as people were entering the government office.

Hundreds of people have been killed and wounded in a series of attacks in Kabul since the beginning of the year, despite President Ashraf Ghani's offer in February for peace talks "without preconditions".

In the southern city of Kandahar, where NATO-led forces operate out of a big air base, 11 children were killed and 16 wounded when a suicide bomber drove his explosive-laden van into a foreign-force convoy, police said.

The 11 children who were killed were studying in a nearby madrassa, or religious school, said Matiullah Zhman, a spokesman for Kandahar police. In addition eight members of the NATO-led Resolute Support coalition were wounded, the force said.

James Mackenzie and Rupam Jain of Reuters reported from Kabul.