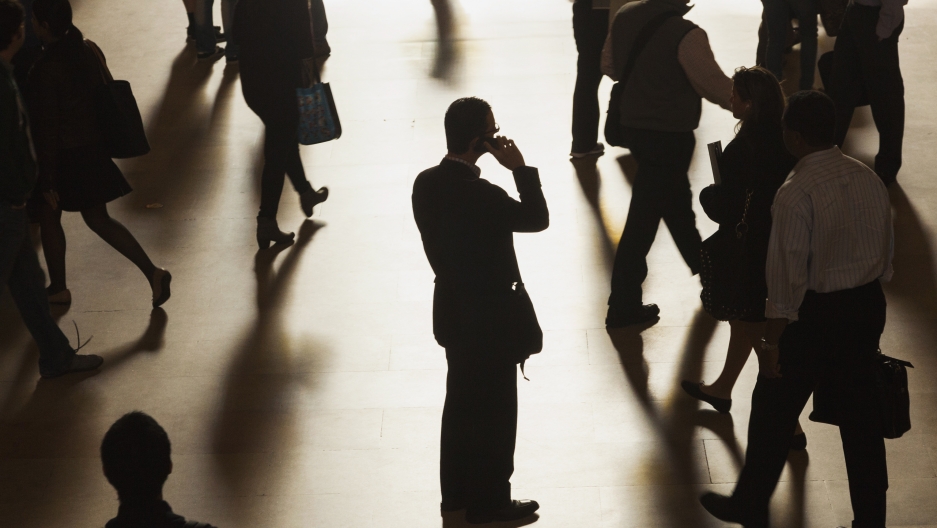 A man stands in the middle of Grand Central Terminal as he speaks on a cell phone.
Credit:

If you live in New York, Los Angeles or Boston, chances are good you've received a robocall in Mandarin.

"I get them also, in the NYPD building," says Donald McCaffrey, an officer with the New York Police Department’s Grand Larceny Division in Queens. "I have an NYPD department cell phone and I get them on the cell phone also. It is out of control."

McCaffrey, who is investigating the calls in New York, says they first came to his attention in December when a 65-year-old Chinese woman alerted the NYPD that she had been scammed out of $1.3 million.

"She called to report that someone from the Chinese consulate called and said she needs to call the Beijing Police Department because she's being investigated for financial crimes over in China," McCaffrey says.

The Mandarin robocall messages are usually some variation on the same theme: "This is the consulate, we have an important document that needs to be picked up, it may affect your status in the US, press a button to speak with a specialist."

While most non-Mandarin speakers probably just hang up, some Chinese immigrants don't do that. One reason is the number that often appears on phones is the number for the Chinese consulate in New York, giving the calls a semblance of credibility. This is known as "spoofing" and is a common — and illegal — tactic to get people to answer robocalls.

Once the scammers get a Chinese person living overseas on the phone, they often carry out what's known as a "parcel scam." The scammer pretends to be from a courier company and claims that a parcel addressed to the would-be victim is connected to a criminal case. The phone call is then transferred to a supposed “police officer” who closes the con by telling the victim that this is a money laundering issue and if they transfer money to a Hong Kong bank account the police will investigate and resolve the case.

"You wouldn't expect it but people do fall for that sort of thing," says Ben Yates, a lawyer based in Hong Kong specializing in cyber-security and cryptocurrencies at the international law firm RPC.

He says Chinese people living abroad who are using shopping platforms from China are sometimes vulnerable to those type of accusations that there's something wrong with what they’re doing, that they’re not entitled to make that type of transaction.

Yates says in Hong Kong, people have gotten used to the scam, which has existed there for several years. Many put an app on their phone to block the calls, which investigators say originate from mainland China.

In New York, the NYPD has received 30 complaints from people ages 21 to 65 who have lost money to this type of scam. Officer McCaffrey estimates $3 million has been stolen since December.

"Some people come to our office. They say they've been scammed, they don't know what to do," Koosays. "We say, 'contact law enforcement law agencies.' But most of them say, 'we don't know English.' There's a gap there, they don't know how to report it."

Yates says while the scammers are most likely operating out of mainland China, the money is often sent to a Hong Kong bank account where it's easier to open an account and raises less suspicion from authorities because of the high volume of international transactions there.

Hong Kong, a former British colony, is a special administrative region of China but has its own legal system that operates independently of Beijing.

Yates suspects that Chinese people living overseas, even law-abiding citizens, have legitimate worries about the government monitoring their activities overseas.

"If you're based overseas and you're from mainland China then you may be concerned about the authorities questioning what you're doing," he says. "You have to understand the sort of political and legal system that operates in mainland China that might be quite different to what you're used to in the US."

The Chinese consulate in New York is aware of the scam and has posted a warning. So has the Federal Trade Commission, which helps consumers and law enforcement collect information on scam calls.

In addition to the ongoing mystery of who or what is behind these calls, experts say they’re puzzled at how these scammers collected the phone numbers.

Poss suggests one sure-fire way to avoid being a victim of this scam — just hang up.

A version of this story originally appeared on WNYC.