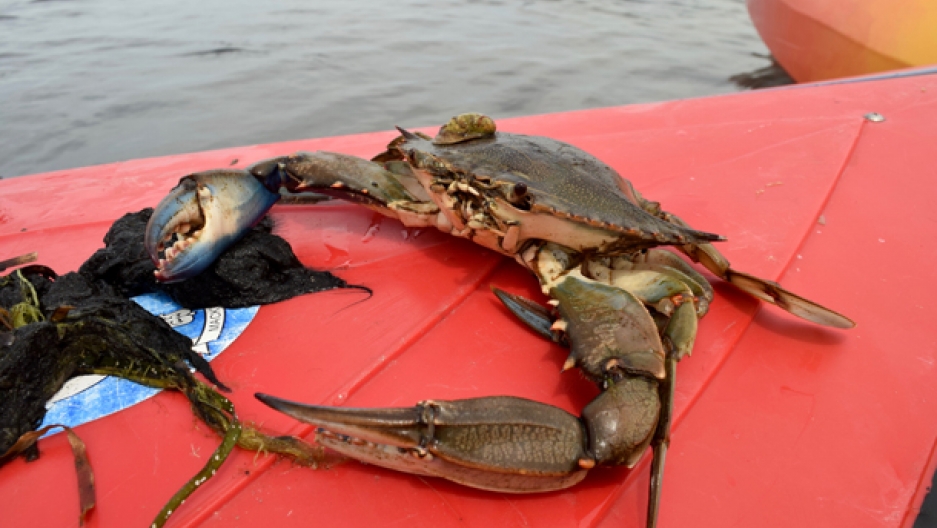 A blue crab recovered from a trap sits on a kayak, next to a matted clump of blue-green cyanobacteria.

The Island of Nantucket, off the coast of Cape Cod, Massachusetts, is home to a rich ocean ecosystem and host to scientists dedicated to understanding it — including UMass student Matt Souza, who conducted a foundational study of crab populations in the harbor on the north shore of the island.

Souza, a student at the School for the Environment at UMass Boston, is getting his Bachelor of Science degree in environmental science.

“Crabs may not be the prettiest of animals species, but they are really important to the ecosystem because they literally are the scavengers of the ocean,” Souza says.

His project is one of the first to look for patterns in populations of crab living in the harbor on the northern shore of Nantucket.

“Matt’s got all of the qualities of a great field ecologist,” says UMass professor Jarrett Byrnes, Souza’s faculty adviser. “He's got that tenacity, he’s got that drive and he's just got that deep, deep curiosity underpinning it all. He has [asked] some questions about when and where different types of crabs occur that we haven't really asked in my lab before.”

As a youngster from the Boston suburb of Billerica, Cape Cod was the family’s summer playground, Souza says. At a beach called Skaket, he fell in love with the ocean and getting to know the mudflats and looking at the hermit crabs.

“I was that little kid with a pail and a shovel digging around in the sand looking for little critters,” he says.

To do his research, Souza lived for a summer at the University of Massachusetts Boston Field Station, which is tucked among salt marshes buzzing with insects, right near the water. His project was designed to sample crab population in the harbor.

He placed 16 crab traps in the waters and went out four days a week to record what he found. For over two months, Souza spent his days alone, waist deep in the sea, collecting data on crabs. Later, two others joined him — his brother, Ben, and Anna Dworetzky, a Nantucket Field Station high school intern.

The team logged every crab, measuring each one with an instrument called a caliper. They found crabs of all shapes, sizes and species, including spider crabs, green crabs, blue crabs, lady crabs, Arcadian hermit crabs, mud crabs and horseshoe crabs.

Souza located his traps strategically to account for potential differences in crab populations, depending on the distance from the shore and the density of the seagrass habitat. Seagrass is especially important to Souza.

“I fell in love with seagrass,” he says. “I feel like they are disrespected in terms of ocean habitats. Everyone thinks about the colorful coral reefs and everyone looks at the fish. And people don't realize that a lot of those fish start out in the seagrass beds and then make their way over to the coral reefs, and vice versa.”

Souza and his crew also found a lot of toxic, blue-green cyanobacteria — sometimes called blue-green algae — that arrived in the harbor around 2008. It grows at the base of the seagrass and moves upwards, forming mats on the water that make it harder for the seagrass to get sunlight.

Souza collected data on Nantucket for a total of 11 weeks and spent a semester analyzing his data.

“The longnose spider crab was the most abundant crab in the entire project. The second most common crab, unfortunately, was the European green crab, which is an invasive crab species,” he says.

“When the population of blue crab increased, the green crab decreased in all four locations, though it wasn’t location dependent; it was species dependent. They tried to avoid each other,” he explains.

Professor Byrnes suggests that Souza’s research can be applied to future studies in the Nantucket harbor.

“Baseline biodiversity observations are absolutely critical knowledge that we need right now and it's something that is often difficult to get funding for because it’s not sexy,” he says. “And yet, if people don’t do it, we don’t understand how the world works.”

Souza said the project left him wanting to research more.

“After this whole experience, I can say that there are definitely things that I would do differently and there were things I did that saved my backside for the future me,” Souza says. “When I finished this project, I had 20 more questions that I wanted to answer.”

But he does have a new dataset for future scientists to depend on — data that may someday even help answer some of those questions.