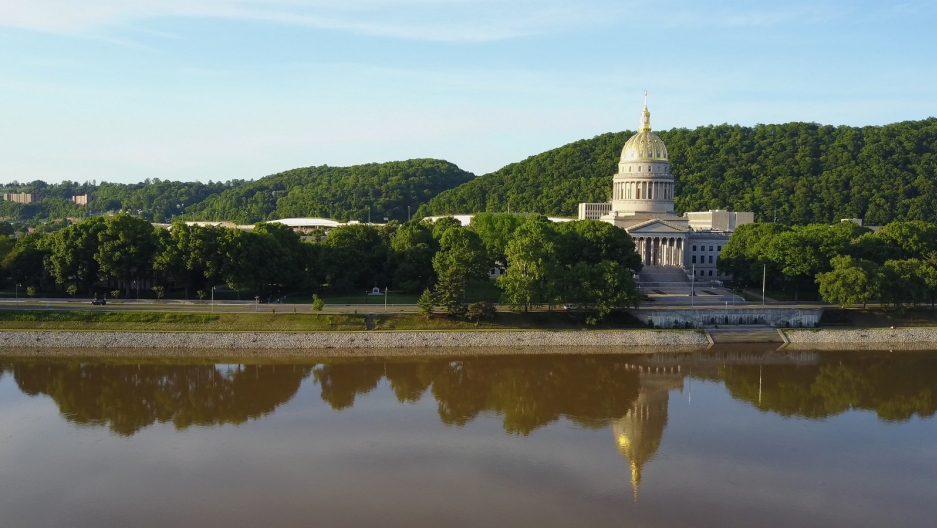 The West Virginia State Capitol building in Charleston sits on the Kanawha River, which is fed in part by the Elk River — the main water supply for nearly 300,000 of the state's residents.

There are several chemicals that have no taste or smell that could reach our drinking water without us realizing the inconspicuous harm they are causing. Then, there are some that have a particular property to them — such as smelling like licorice.

That is the case for MCHM, a chemical that was created to help in the washing of coal. Labeled as a coal flocculant, it has the ability to separate burnable fossil fuel from dirt and rock and other materials.

In 2014, a significant industrial chemical leak sent large amounts of MHCM into the Elk River, a tributary of the Kanawha River, which provides water to many residents in West Virginia’s capital city of Charleston and beyond.

The incident — which would affect the water supply some 300,000 West Virginians — has become the focal point of the latest documentary from filmmaker Cullen Hoback, “What Lies Upstream.” The film, which is available to stream through PBS, debuted on the network on April 16.

“What made MCHM unique is that MCHM had a very particular quality. You could smell it in the parts per billion, and what that means is that with the tiniest, tiniest fraction of a drop, if you were to put it in a pool, you would still be able to smell it, and that smell was licorice,” says Hoback, who first entered the national scene with his acclaimed 2013 film about the information that is collected by the government and corporations through online browsing, “Terms and Conditions May Apply.”

“So, had there been no smell the contamination wouldn't have been uncovered, and people would have just drank the water without knowing.”

‘A lot more harmful than we thought it was’

Amazingly enough, Hoback discovered MCHM had received the classification of being a nonhazardous chemical, giving it fewer regulations and no required inspections of tanks that hold it. In fact, there are only 72 chemicals that water companies are required to test for, he says, leaving approximately 100,000 chemicals that are classified as being nonhazardous and not subject to stricter supervision and monitoring.

“This chemical, because it had an odor, people started looking into it, looking into the data behind it and uncovering that, gosh, this chemical is actually a lot more harmful than we thought it was,” Hoback says, who adds MCHM has found to be twice as toxic as the initial report that came out from its manufacturer, Eastman Chemical.

Initially, the Centers for Disease Control and Prevention (CDC) stated that it was safe to digest MCHM at one part per million, before expanding its ruling to recommending no pregnant women should drink water containing the chemical.

“The reality was is that they were using a tiny amount of science that had been produced by the company,” Hoback says of the CDC. “They had no idea really what the effects were, they just thought they did.”

After the leak, a wave of reactions surfaced that went against the CDC’s predictions, including severe rashes. Hoback recalls one family where one person's neck “inflated to the size of a balloon.”

Says Hoback: “They had no idea what was causing this originally, and at the same time, the government was coming out and saying, ‘No, the data says that this chemical couldn't have this effect, certainly not at these levels. You're wrong, you're making this up.’”

Delving into a bigger problem

Hoback says he was only planning on staying in Charleston for a week to begin to investigate the matter. He ended up staying for a whole year, after realizing how deep the issue went at the state and national levels of government — spotting several instances where scientists could use fake data to potentially harm public health.

By embedding himself into the community, Hoback was granted access where most documentary filmmakers are not. This included a meeting between industry lobbyists and members of the West Virginia Department of Environmental Protection.

“You hear all the time that this is what happens behind closed doors, but you never see it,” he says. “They were literally writing the law. So, they were crossing things off, they were saying what they would and wouldn't accept, and their word was as good as the law. Nobody had any power against them.”

During his time working on the project, Hoback sat down with Mark Edwards, a professor of civil and environmental engineering at Virginia Tech. Edwards recently received the Scientific Freedom and Responsibility Award from the American Association for the Advancement of Science for his independent evaluations of the significant water contamination in Flint, Michigan, after the crisis began in 2014.

One of the questions Hoback asked Edwards centered around the following: How could agencies such as the Environmental Protection Agency (EPA) and the CDC knowingly publish false reports when the reason for their existence is to protect the public’s health?

“He had to very politely and kindly answer my question over and over again. One thing he says is, ‘Well, why would the Catholic Church do what it did?' If you incentivize people to do the wrong thing and they can get away with it, they will do that, and what we see in both of these agencies is the incentivization of bad behavior. Don't find bad things,” Hoback says.

“Scientists who try to do the right thing, they get fired. So what happens over time is they just stay in this agency of sort of non-enforcement that is trying to protect its funding, is trying to look good in the eye of the public, and then you have officials who run these agencies that are appointed by politicians who are beholden to corporate interests, to the lobbyists, and so what happens is there is a culture that, like a trickle-down effect from these top officials, and that's what creates this culture of non-enforcement.”

As far as what steps Americans can take to help ensure the cleanliness of their own drinking water, Hoback says water filters are helpful in taking out heavy metals — but there are no completely safe sources of water in this day and age.

“There are ways to make things marginally safer, but the reality is that we're going to all be exposed to these chemicals until we start to get the entire regulatory scheme around them under control,” Hoback says.

This article is based off an interview that aired on PRI’s “Living on Earth” with Steve Curwood.