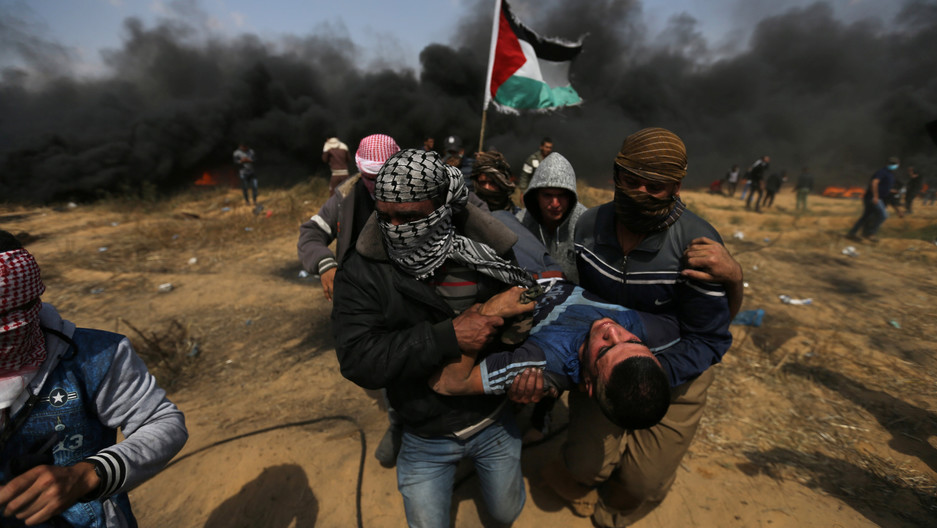 A wounded demonstrator is evacuated during clashes with Israeli troops at a protest where Palestinians demand the right to return to their homeland, at the Israel-Gaza border in the southern Gaza Strip, April 27, 2018.

Israeli troops have killed 41 Palestinians and wounded more than 5,000 others since Gaza residents began staging protests along the border fence on March 30 to demand the right of return for Palestinian refugees.

The troops were holed up behind fortifications on their side of the 40-kilometer (25-mile) border fence and fired live ammunition and tear gas at protesters at five locations on the Gazan side.

Gaza medical officials said two protesters who were struck by bullets were in critical condition in hospital and 600 others were wounded.

The Israeli military said 10,000 Gazans were participating in what it described as "riots," and that some had tried to breach the border into Israel. It said troops "had operated in accordance with the rules of engagement" to stop people crossing the border.

The Gaza health ministry said 200 were wounded by gunfire, including a Palestinian journalist who was hit in the foot by a bullet.

Dozens more, including four medics, were treated for gas inhalation, as Israeli forces showered the area with tear gas canisters from behind their fortifications in Israel.

Protesters hurled stones and rolled burning tires toward the fence, and some attached cans of burning gasoline to kites and flew them into Israeli territory.

Others cleared away barbed-wire coils that Israeli troops had placed in Gazan territory overnight in a bid to create a buffer zone between protesters and the fence.

The protests come at a time of growing frustration for Palestinians as prospects for an independent Palestinian state look poor. Peace talks between Israel and the Palestinians have been stalled for several years and Israeli settlements in the occupied territories have expanded.

In a statement, UN High Commissioner for Human Rights Zeid Ra’ad al-Hussein called the loss of life deplorable and said a "staggering number" of injuries had been caused by live ammunition.

Israel's foreign ministry had no immediate comment but the government has consistently said it is protecting its borders and that its troops are following rules of engagement.

Israel's UN envoy, Danny Danon, told the Security Council on Thursday that Hamas in Gaza was responsible for Palestinian casualties and that it was using innocent Palestinian women and children as human shields, while they cowered behind in safety.

"The terrorists are hiding while allowing, even hoping, for their people to die. This is evil in its purest form,” he said.

Hamas denies the Israeli accusations. "Danon's comments are an attempt to escape responsibility and to cover up for the execution of unarmed children and people by occupation soldiers," said Hamas official Mushir al-Masri.

Named the "Great March of Return," the protest action revives a longstanding demand for the right of return of Palestinian refugees to towns and villages which their families fled from, or were driven out of, when the state of Israel was created in 1948. Israel refuses any right of return, fearing that the country would lose its Jewish majority.

More than 2 million Palestinians are packed into the narrow coastal enclave. Israel withdrew its troops and settlers from Gaza in 2005 but maintains tight control of its land and sea borders. Egypt also restricts movement in and out of Gaza on its border.