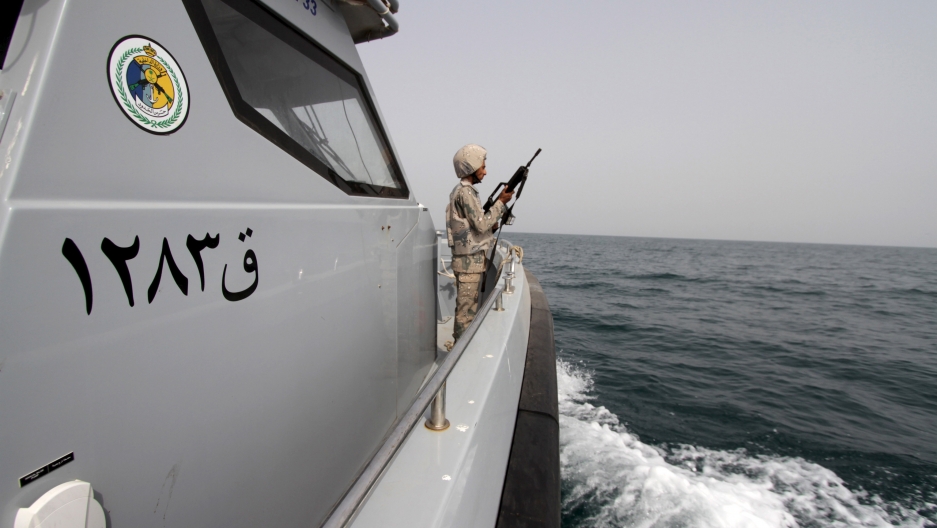 A Saudi border guard watches as he stands in a boat off the coast of the Red Sea on Saudi Arabia's maritime border with Yemen.

A Saudi Arabian diplomat said last weekend that 19 oil tankers were seized by rebel forces off the coast of Yemen. Then, the Saudi Embassy in Washington, DC, repeated the story. But based on interviews and research conducted by PRI, there is no hostage situation at all.

The first report appeared Saturday, April 21 in a tweet from a Saudi Arabian diplomat, Mohammad Al-Jabir, which showed a list of ships which the ambassador said were being detained outside Yemen's deepwater port of Hodeidah.

"A list of detained ships by the Iranian-backed Houthi militia in the anchoring zone, which they control," the tweet reads. "These ships have been detained for more than 26 days."

A hostage crisis. Hijackings at sea. Commercial ships to be destroyed. An environmental disaster to follow. The Saudi press release indicated a crisis was surely brewing.

But shipping companies and industry analysts tell a different story.

Related: Saudi Arabia promises $1.5 billion in aid to Yemen — but it's still bombing the country

TankerTrackers.com, a maritime transparency project based in Sweden, spotted the tankers listed by the Saudis within hours of the ambassador's tweet. Through satellite imagery and data transmissions, the group identified the vessels anchored off Hodeidah and began watching their movements.

We've now identified and logged all of the vessels in question. Should they move, we'll know about it. They came in (for the most part) from the UAE via Djibouti, carrying fuel for the population, given it's collectively over 2.2M barrels. Saudis say Houthis blocked all 18. #OOTT pic.twitter.com/Zzm8W1ElN4

Hodeidah's deepwater port accommodates commercial tankers and cargo ships that deliver food and fuel to the Yemeni north. The port, considered vital to Yemen's economy, is controlled by a rebel group, Ansar Allah, also known as the Houthis.

But the sea lanes approaching Hodeidah are controlled — and frequently blocked — by a Saudi-led coalition of countries opposed to the Houthis. The Saudi blockade has been blamed for famine conditions so dire that international aid organizations, human rights groups and even the Trump administration have urged the Saudi-led coalition to ease its blockade of Hodeidah.

In more than three years of the Yemen civil war, the Houthis have regularly attacked Saudi targets along the northern Yemeni border, fired ballistic missiles into the Saudi capital, and just weeks ago attacked a Saudi tanker, the Abqaiq, off the coast of Hodeidah. But this is the first time the group has been accused of blocking its own port to maritime traffic.

On Tuesday, a spokesperson for a Greek shipping company whose tankers are on the Saudi list expressed surprise about the Saudi accusations. "Up to now there is not any issue reported by vessels," wrote Capt. Minas Papadakis of the Athens-based company, Eurotank, which manages four of the ships. "There is congestion at port, but waiting time is normal for Hodeidah."

Papadakis said the Delia I had successfully offloaded its cargo of fuel at Hodeidah and that Eurotank's other ships were in line to do the same.

"Ariana, Selene and Liana are at [Hodeidah] anchorage waiting orders by port control for discharging their cargo," he said. "We confirm that all are in order."

Samir Madani of TankerTrackers.com fact-checked the Saudi claim that vessels had been held hostage for up to 26 days.

"Given everything that we've seen from satellite imagery, we have not seen any vessels that were surrounded or physically blocked from entering port," he said. "They've been sitting idle in anchorage. And now we see a lot of traffic: vessels that move from anchorage into port to deliver the cargo, and then they leave the port."

In short, it's been business as usual at Hodeidah.

"Everything looks normal," Madani said. "It looks like something that you see in Houston outside Galveston right now. But on a smaller scale."

The Saudi-generated stories may have had another purpose.

"Calling attention to the fact that Houthis are blocking international shipping is a good way to try and show the world that the Houthis are a danger to the global community," said Ellen Wald, author of the book Saudi, Inc: The Arabian Kingdom's Pursuit of Profit and Power. "It would make sense for the Saudis to take this tactic, particularly when their own activities in Yemen are under so much scrutiny. They are also probably looking to push the UN to take action against Iran for funding the Houthis and showing evidence of their disruption of global shipping lanes is a piece of that."

Saudi journalist Jamal Khashoggi, based in Washington, DC, says this kind of messaging is understandable, considering the current political climate. "We are at war, and it is typical in the Middle East to exchange stories that make the other side look ugly," said Khashoggi. "Saudi Arabia is very much bothered by being blamed by Western media for the humanitarian situation in Yemen, and it wants to blame the Houthi," he said. "And the Houthi should be blamed, too. I mean both sides are responsible for the humanitarian situation in Yemen."

The Yemen war has made an already poor country into what the United Nations has called "the world's worst humanitarian crisis." Aid groups, activists and a growing number of American political leaders have been calling on the US to bring an end to the war by cutting off its support for its ally Saudi Arabia, one of the warring parties. The US provides the Saudis with logistical support, midair refueling of fighter jets and assistance with identifying military targets in Yemen.

"We had a close call for the vote in Congress a few weeks ago," Khashoggi said, referring to a vote in the US Senate that would have empowered Congress to review US support for the Saudi-led bombing campaign in Yemen. "This bill was dead, [but it] is coming back, and it will be reviewed, and voted on again. So Saudi Arabia is becoming more active now in lobbying."

A new one is already making the rounds. Recent reports in Saudi media suggest that the Houthis are preventing ships carrying humanitarian aid from entering the port.

A spokesperson from Save the Children, Bhanu Bhatnagar, told PRI that, to the contrary, they have seen no disruptions to shipments.

"Save the Children has not had any of our aid supplies blocked entry via Hodeida recently and as far as we are aware, neither have other INGOs," Bhatnagar said Thursday. "But we heard of this story a week ago, reported by Saudi newspapers."

So while the Houthis continue to provoke the Saudi-led coalition on many fronts, their threat to international shipping may be overblown.

Earlier this month, after a Houthi missile blew a large hole in the Saudi tanker Abqaiq, industry publication The Maritime Executive noted that the "missile attack on a tanker off Yemen sparked diplomatic outrage, but it is unlikely to affect merchant traffic in the Red Sea."

The Saudi Embassy has not responded to PRI's requests for comment.