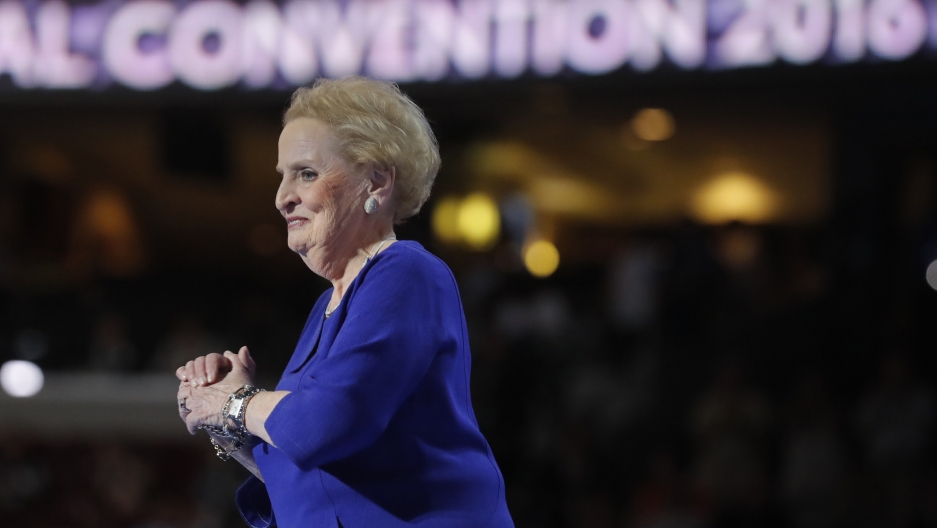 Former US Secretary of State Madeleine Albright arrives to speak on the second night at the Democratic National Convention in Philadelphia, Pennsylvania, US, July 26, 2016.

Societies often change slowly. Shifts in values and allegiances can be so subtle you might miss them. A smart politician knows that.

Consider how fascist leader Benito Mussolini consolidated power in Italy in the 1920s. He likened the process to carefully preparing a chicken for slaughter.

“If you pluck a chicken one feather at a time people don’t notice it,” says former Secretary of State Madeleine Albright. “So I’m concerned about the feather-plucking.”

Albright sees quite a bit of feather-plucking happening around the world these days and she details those changes she sees contributing to authoritarianism in her new book "Fascism: A Warning."

The World: You describe several signs that a country is leaning toward fascism, things people should pay attention to. Very briefly, describe them.

Sec. Madeleine Albright: If there is identification of one group that is supposed to represent the nation, a kind of a tribal aspect and the other people are then robbed of their rights. If there are statements against the press, that the press is the "enemy of the people." If you have a leader who thinks he's above the law. There's also a great deal of propaganda and rallies used to rouse people in which there is even evidence of violence. So I think those are the major signs.

Not every dictator is a fascist, whereas every fascist is dictator. But it is that blending of what is coming up from the bottom because people are dissatisfied with maybe their economic position, they’re being discriminated against. And then having it melded in with a leader who then uses that disgruntlement from the bottom, and in fact makes it even worse. Ultimately, a fascist is somebody that will use violence to attain power or a bully with an army.

I'm very careful about who I might call fascist, but I actually do point out what I see are some of the signs are well.

I guess first of all I need to be clear: do you consider Donald Trump a fascist?

No. I do not call Donald Trump a fascist. I do think he is the most undemocratic American president in modern history. He does, in fact, blame the press for everything — "the enemy of the people." He does seem not to have any respect for democratic institutions — the judiciary, for instance. And he does act as if he's above the law. And so I do see some signs here which is why I thought it was important to warn about it.

Of course, Donald Trump was elected. How do you respond to a person like Donald Trump, if you see him as undemocratic?

Leaders, whether Mussolini or Hitler — or the countries that I talk about like Hungary, and Poland, Turkey and, the Philippines and Venezuela — Mussolini and Hitler came in constitutionally by power being handed to them. And the others had been elected, which is one of the things that I think is scary. It means basically that those of us that vote have to ask some very serious questions about what the leaders are doing, what they believe in. And I think that there has not been enough analysis of some of the ways that President Trump behaves.

What's interesting about where we find ourselves today though is that we're public radio, we're interviewing you. You've been on other public radio programs print outlets. Have you been on more conservative media like Fox?

I have. And Dana Perino interviewed me and I was looking at the Twitter feed and people are unbelievably critical of her for having done that, which I think is ridiculous. We have to talk to people we disagree with. We can't just listen to what we agree with. I do listen to you and public radio all the time. But you might be surprised, I actually listen to right wing radio because I think it's very important to hear what people are saying and not just to have one source of information because we do need to be respectful of the ideas of others.

But that's kind of the heart of the matter in terms of least the US. I think the divisiveness in the US is very much about everyone curating their own information feed. Based on your own experience and your own long career, what can we do about that? Because leaders don't have to hold rallies anymore. You have a way “in” to people online. And if there isn't a collective source of information, what is the way for people to reach across and be having the same conversation, if one is worried about creeping authoritarianism.

I do think it's important for teachers to get their students to talk other students that they disagree with. I think there needs to be community activity, where, in fact, there is a reaching out to those that have different views instead of, you know, I don't like the word "tolerance" because to tolerate to put up with. We need to be respectful. I think the social media issue is incredibly complicated because you can't tell people what not to listen to. I think you have to advise them on what they can add to their listening.

I'm curious about the moment you decided, “Yikes, I've got to write a book about fascism.” Was it something a leader said, a foreign leader or Donald Trump? Was there something that made you think, “Oh boy, here we go?”

Well, you know, actually, I was planning to write this book no matter who won. I was beginning to see things in Europe, for sure, the kinds of things that were going on in Hungary and what was going on in Poland, Turkey.

But I did begin to see something in the United States too, which was that there is very large income inequality now. But I did not expect to have what happened and to have a leader who was so undemocratic. I mean that's what stuns me. That this is a man that has no sense about the real basis of our Constitution.

Do you think that President Trump is intentionally being undemocratic, or unwittingly?

It's very hard for me to know what he's doing in that regard. I do think that there are those that are in his circle who were intentionally doing that. Steve Bannon for one. And from what I read, I can see that a lot of it is intentional. You certainly saw it at the rallies where there was an incitement even to violence. So I think that there are people around him that I think are doing it deliberately.

I wonder when the last time you couldn't sleep was and what was keeping you awake?

Well, actually last night. I am, at the moment, you know, on my book tour. What keeps me awake is that our country, our people, are so unhappy at the moment and lost in so many ways and are seeking answers. And I think that we are in kind of a muddle, at just exactly a time when we need leadership that can respect democracy and understand the various elements of our country that work and not be kind of lost totally. So that does keep me awake. And I have a huge opportunity with this book because people are listening, but I don't have all the answers. And I do think that it's important to raise the questions and do the warning. And I especially think that given the kinds of things that are going on internally in our country, but also externally.

So given my own background, I still believe in the importance of American leadership and in the role of America on human rights and democracy and decency. That chair is empty at the moment, and people are waiting for America to behave. I'm a grateful American. I want to be a proud American because our people are remarkable and our leadership is letting us down.