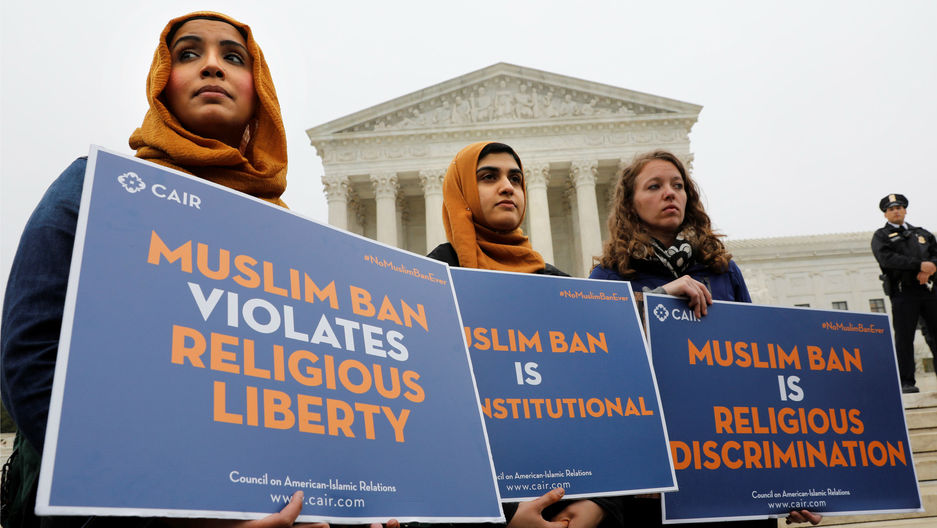 Protesters gather outside the US Supreme Court in Washington, DC, April 25, 2018, while the court justices consider case regarding presidential powers as it weighs the legality of President Donald Trump's latest travel ban targeting people from Muslim-majority countries.

A majority of US Supreme Court justices on Wednesday seemed to agree with the government’s contention that President Donald Trump had the authority to ban travelers from several Muslim-majority countries in the name of national security.

In the case, Trump v. Hawaii, the justices considered the third and latest version of Trump’s executive order — also called a presidential proclamation — which restricted travel to the US by citizens of eight countries, six of them predominantly Muslim. (The countries are Syria, Iran, Yemen, Somalia, Libya, Venezuela and North Korea; Chad was recently removed from the list.) The court’s decision could have wide-reaching repercussions for executive power, particularly the president’s authority in matters of immigration.

The long-awaited oral argument is the justices’ final case this session and a decision is expected by late June.

Related: As the Supreme Court considers Trump's travel ban, some want justices to remember a case they decided 74 years ago

On issues of national security and foreign affairs, the courts generally defer to the president and Congress. On Wednesday, the conservative-majority Supreme Court seemed to lean toward keeping with that tradition.

The justices had concerns about Trump’s discriminatory intent in issuing the ban. They grilled the government’s lawyer, Solicitor General Noel Francisco, on the national security reasons for it and whether they should consider anti-Muslim comments Trump made before becoming president.

Francisco asked them to take Trump’s order at face value.

“This proclamation is about what it says it’s about: foreign policy and national security,” he said.

But attorney Neal Katyal, who represented the state of Hawaii and others challenging the ban, argued Trump’s order was overly broad and designed to discriminate against Muslims.

Some 80 briefs were filed by a variety of entities, including universities, states, religious organizations, civil rights groups and national security experts.

Civil rights groups and immigrant advocates who hoped some of the court’s conservative-leaning justices — particularly Chief Justice Roberts or Justice Anthony Kennedy — would find the ban unconstitutional may have left disappointed. But they’ve not given up hope yet.

“I was glad that justices had probing questions, and they had obviously looked at their briefs and thought deeply about the issues,” said Azadeh Shahshahani, an attorney from Project South, an Atlanta-based social justice group, who was at the hearing. “I think it's hard to tell in terms of which way the Supreme Court will rule. We hope that the Supreme Court will strike down the ban. But regardless, the fight will go on.”

1. Has the travel ban been tainted by prejudice on the basis of religion?

Justice Elena Kagan posed the hypothetical scenario of a president who tried to ban citizens from Israel.

“Let's say in some future time a president gets elected who is a vehement anti-Semite and says all kinds of denigrating comments about Jews and provokes a lot of resentment and hatred over the course of a campaign and in his presidency,” she said to Francisco, the government’s attorney. “And what emerges ... is a proclamation that says no one shall enter from Israel. … The question is, what are reasonable observers to think given this context?”

Conceding that “it's a tough hypothetical,” Francisco argued that such a proclamation could be lawful.

“If his cabinet were to actually come to him and say, Mr. President, there is honestly a national security risk here and you have to act, I think then that the President would be allowed to follow that advice even if in his private heart of hearts he also harbored animus,” Francisco said.

The government argued it is not.

“If it were, it would be the most ineffective Muslim ban that one could possibly imagine since not only does it exclude the vast majority of the Muslim world, it also omits three Muslim-majority countries that were covered by past orders, including Iraq, Chad, and Sudan,” Francisco said.

Katyal countered that just because the order does not cover all predominantly Muslim countries, doesn’t mean it’s not religious discrimination. “If I'm an employer and I have 10 African Americans working for me and I only fire two of them ... and say, well, I've left the other eight in, I don't think anyone can say that's not discrimination,” he said.

“You have to look to all the circumstances around it that are said, the publicly available ones, Katyal added, referring to Trump’s tweets and public statements on Muslims and other minorities.

3. Should the court consider Trump’s anti-Muslim comments, the most inflammatory of which were made on the campaign trail?

The government argued it should not — and that in this case, the comments are irrelevant.

Campaign statements “should be out of bounds,” Francisco said, because they are “made by a private before he takes the oath of office” and before receiving the advice of his cabinet. In any case, Francisco added, the statements don’t apply here, because the executive order is “based on a multi-agency worldwide review that applied neutral criteria all across the world and concluded, under those neutral criteria,” that some countries were not sharing enough information on their own citizens with the United States.

Katyal countered that Trump continued to make Islamophobic statements as president — in particular, he retweeted anti-Muslim videos and once tweeted that he wanted an even stronger ban, one that wasn’t “politically correct.”

“I think the president could have disclaimed — you know, easily moved away from all of these statements, you know, but instead they embraced them. That's the difference,” Katyal said.

4. Can and should the court second-guess the president’s judgment on national security?

Kennedy asked Katyal: “And your argument is that courts have the duty to review whether or not there is such a national contingency; that's for the courts to do, not the president?”

To which Katyal replied, “No. I think you have wide deference, Justice Kennedy.”

Roberts, Kennedy and Alito did not seem to be swayed, raising other possible scenarios, such as a terrorist attack, where the president may need to act unilaterally.

5. Did Trump overstep his bounds as president?

Justice Sonia Sotomayor discussed existing vetting procedures for immigrants and visitors created by Congress. She asked the government’s attorney, “Where does the president get the authority to do more than Congress has already decided is adequate?”

Francisco pointed to the “the tailored nature of this proclamation”: It was meant to apply to specific countries that were not working closely enough with the United States on national security risks. He held up Chad as an example of a country that made necessary changes.

Katyal argued that Trump took an “iron wrecking ball” to US immigration laws.

“No president has ever said anything — anything like this. And that's what makes this different,” he said.

Amulya Shankar contributed to this report.