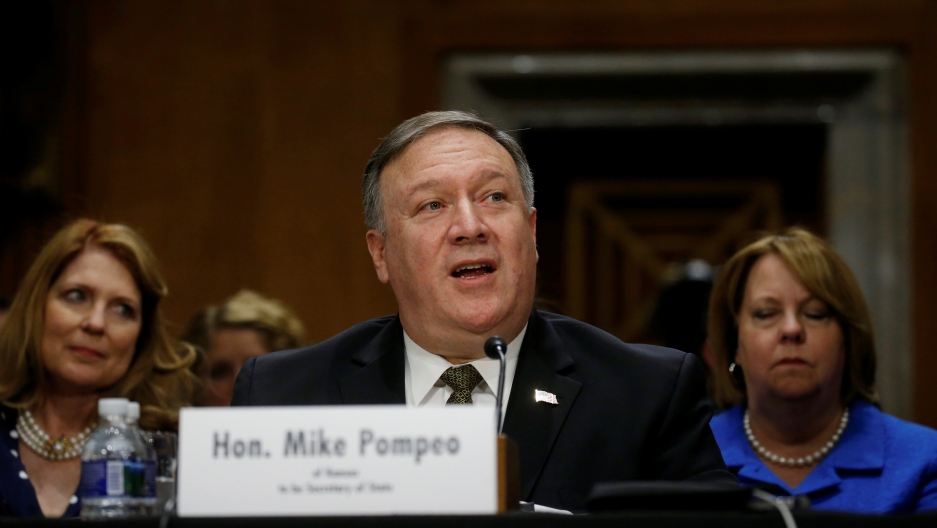 CIA Director Mike Pompeo testifies before a Senate Foreign Relations Committee confirmation hearing on Pompeo’s nomination to be secretary of state on Capitol Hill in Washington, DC, on April 12, 2018.

President Donald Trump’s nominee for secretary of state took a big step closer to confirmation on Monday night. In a surprise vote, a key Senate committee approved the nomination of CIA director Mike Pompeo for the job. Pompeo is expected to face a vote in the full Senate later this week. One lawmaker who voted "no" is Robert Menendez of New Jersey, the top Democrat on the Foreign Relations Committee.

Menendez spoke with The World’s Marco Werman and the following is a transcript of the full interview.

The World: There was a sense that Mike Pompeo was not going to get approval from the Senate Foreign Relations committee. What happened last night?

Sen. Bob Menendez: Well, one member on the Republican side, Senator Rand Paul, had said he was definitely going to vote against Pompeo. And then, I guess after significant lobbying by the president and the White House, he switched [his vote].

And what seemed to happen between President Trump and Senator Rand Paul was about how much Pompeo actually believes the Iraq War was a mistake. Trump insisted that Pompeo did believe the Iraq War was a mistake. Pompeo also says he wants to pull troops out of Afghanistan. But if you look at his track record over the years, calling Pompeo a hawk is not an exaggeration. What are we supposed to believe about him?

That's the actual question that I posed at the end of his nomination hearing as I framed why I was voting "no" on Pompeo yesterday in the Senate Foreign Relations Committee. Is it the Mike Pompeo who's talked about regime change in various parts of the world? Or is it the one who would pursue robust diplomacy? Is it the one who will internally push back on the president's worst instincts or facilitate them? Based on a record, as well as his answers, it just seemed to me that the Mike Pompeo we’d have as the secretary of state is not the robust diplomatic adventurer who would seek to advise the president strongly to use diplomacy versus military action, and who also has made comments about different communities in the past that a good part of the world represents — whether that's the Muslim community, Indians, or LGBTQ communities. If you're going to promote democracy and human rights across the globe, you have to start by observing them here at home.

Now, there are some troubling aspects of Pompeo’s track record that you have cited, other lawmakers have too. I'm talking about how he speaks about Muslim leaders in America and their “special obligation,” as he calls, it to prevent terrorist attacks on American soil. What did he say about that in the hearings?

He never took the opportunities that were presented to him by various members, including myself, to either show regret to say that he was mistaken. He basically skirted those issues.

It is really hard to imagine someone at this level of American politics making similar comments about any other major religious group. Why is this not a bigger deal?

Well, it should be a big deal. And that is one of the most significant reasons that has led every Democrat on the committee to vote "no."

There was a blog post from the ACLU that stated that “Senators must hold Pompeo accountable for his hostility toward Muslims in America and around the world, and ensure that such religious bigotry has no place in shaping State Department policies.” That is a pretty strong statement. Do you feel the Senate Foreign Relations Committee did a disservice to Muslims?

Well, I certainly feel that the Republican majority, I didn't hear one of them who questioned him on the question of his comments about the Muslim community. It was only Democrats, including myself, who questioned him on those issues. And we think that is extremely important, not just for Muslims in America, which is important so that they be treated like any other American who chooses how they worship. But for a good part of the world, globally, where the Muslim faith is a significant part of the world's major religious face and those people who practice that faith. Many of which we need as allies in the world in terms of promoting the national interest and the security of the United States. So, Democrats did press that. Unfortunately, I don't recall one Republican asking him those questions. And I think in that respect they did a disservice to the community.

There's also the secret trip that Pompeo took to North Korea even before the confirmation process played out. There had already been criticism about Trump announcing, seemingly out of the blue, that North Korea and the US would sit down to talk. Some said that was too premature, with not enough back-channel discussion to assess seriousness and commitment on the part of North Korea. But then Pompeo went secretly to Pyongyang. Are you satisfied now to sit back and see what happens? And what signs of success are you watching for?

I've said from the very beginning that a meeting is not a strategy. And that this is a high wire diplomacy and national security issue with no safety net underneath the way the president is pursuing it. This would normally take at least a year's worth of very in-depth preparation of negotiations to understand the depth of Kim Jong-un's commitments, to understand what would be possible before you prize him with a meeting with the president of the United States before you create a sense that he is being reasonable and rational and gets benefits and trade from China or international recognition. So, I am concerned that the type of in-depth preparation necessary to know whether the ultimate denuclearization of the Korean peninsula is possible. I get concerned when Pompeo, in his answers to members before the committee on North Korea, talked about not having North Korea have the ability to or the willingness to use nuclear weapons against the United States. That's not our purpose. Our purpose is dismantlement. Dismantlement guarantees that North Korea cannot use nuclear weapons against the United States or Japan or any of its neighbors. Words are important in diplomacy. Negotiations may rise or fall on what the understanding is. And so, I am concerned about all of that. I obviously would love to see success in a denuclearization of the Korean Peninsula. But that will depend upon robust diplomacy and preparation, and honestly, I just don't see that preparation and I don't see the State Department — that has largely been emaciated by this administration — having all the capabilities necessary to make that happen.

Today President Trump called Kim Jong-un “honorable.” It sounds like your sense is that it's all almost too good to be true.

I don't know why you call Kim Jong-un an honorable man when North Korea has on several occasions has stopped [testing]. For example, the reality is they say, "Well, we're not going to test anymore. We're closing our site down for now." People miss that “for now,” because they’ve already tested. Under President Trump's watch, the North Koreans tested an intercontinental ballistic missile. They don't need to test it anymore. They know they have a capability. Many experts believe that they tested a thermonuclear device. They don't need to test that anymore. We don't test. Most of the great powers that have nuclear weapons don't test. The reality is that Kim Jong-un has already achieved what he wanted to achieve in terms of preparing himself for nuclear capability. And to say that he's an “honorable” man — we've seen this story before. When they say that they will consider certain things, they always step back and then move forward. And that's why a very in-depth [preparation] before you have a presidential meeting is so important to really understand what they're willing to do this time.

Senator Menendez, there are rules and protocols when it comes to diplomacy. But at the end of the day, if we look at history, all kinds of diplomatic rules have been broken in order for peace to succeed. Do you agree with that? And do you think Pompeo offers some hope for unconventional diplomacy?

If director Pompeo gets confirmed through the full Senate I certainly will seek to work with him and I wish him the best in the mission. We want America to succeed. We want the world to be safer. As a matter of fact, our concerns about director Pompeo is that he rounds out what some consider to be a war cabinet, versus a cabinet that seeks peace in our time. I certainly would hope that they can achieve that success. But it's interesting to send the director of the CIA — who has talked about regime change in North Korea — as the opening gambit of a conversation with North Korea's dictator.

What happens to the Pompeo nomination now?

The committee, by virtue of Senator Paul's switch, sends this to the floor and I believe at some point this week I'm sure that the majority leader will set a time for Pompeo’s nomination to be considered, for debate to take place, and a vote to take place sometime this week. From what I gather, based upon the announcements of a few members, including a few Democratic members, it would seem that he is on his way to confirmation.