Honduran environmental activist Berta Cáceres was killed in March 2016 by gunmen who broke into her La Esperanza home. She was 43. The murder investigation is still ongoing, though the principal suspect in the case was arrested last month.

Related: In the world's most dangerous nation for environmentalists, a leader is murdered

Berta Cáceres had fought against a dam project from Desarrollos Energéticos S.A., or DESA, which was to be built along the Gualcarque River, considered sacred waters to her indigenous Lenca people. The dam's investors withdrew from the project in the wake of her murder.

Meanwhile, Berta Cáceres's death hasn't stopped the women in her family from championing women's rights and environmental causes. In some ways, her mother and three daughters say, it has strengthened their resolve in a country that is among the world's most dangerous for women and activists.

Berta Cáceres's daughter Bertha Zúñiga herself survived an armed attack in 2017 when men wielding machetes tried to force her vehicle off the road by ramming it with their truck. She acknowledged the symbolic value of continuing her mother’s fight, however: “We know that we aren’t her. She was unique, and she had her own experiences. The Lenca struggle isn’t my struggle — it is the struggle of the whole community. We are going to do all that we can to live out her principles.”

Activism runs in the family

The family's tradition of activism begins with Flores López. At 85, Flores López has been a midwife, a nurse, the three-time mayor of Esperanza, governor of Intibucá and a congresswoman. More recently, Flores López also used her experience to help her granddaughter, Olivia Zúñiga Cáceres (one of Berta Cáceres's daughters), get elected to Congress. 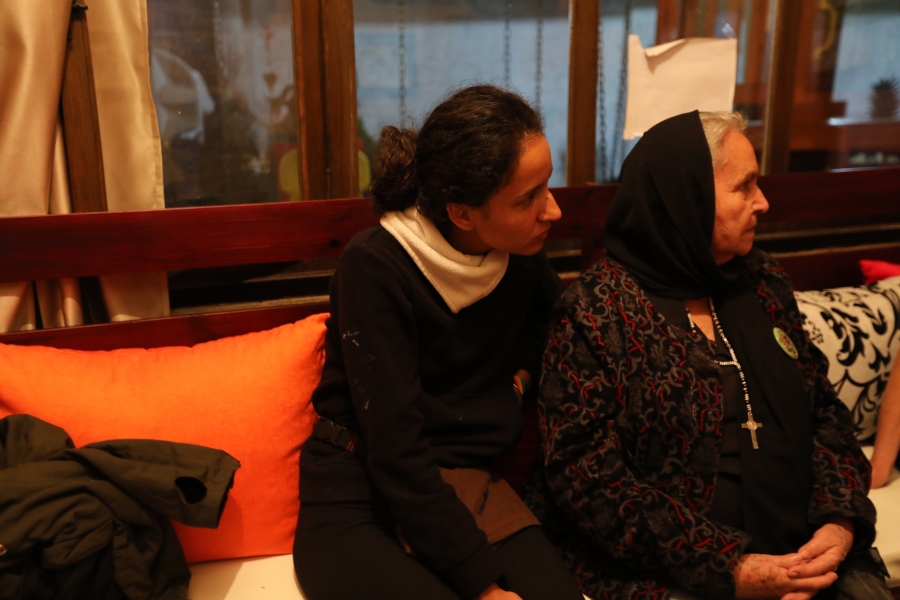 Austra Bertha Flores López and Bertha Zúñiga are pictured at a restaurant in La Esperanza.

In the '80s, Flores López led a political movement to secure the right for women to run for office in Honduras. “It wasn’t easy to break the glass ceiling and end the extreme policy that only men could run for office. I ran against nine men the first time, and it was hard. With the help of other women, we organized and asked other women, ‘Why keep voting for men if they are going to deny us our rights?’” she told PRI.

The then-young Berta Cáceres always accompanied her, and that early exposure to politics probably instilled in her the values that would drive her until the day she died. Also at the time, Flores López continued to deliver babies — many of whom were named in her honor. “There are so many Bertha’s in the world,” said Flores López, who has delivered more than 5,000 babies in her lifetime.

In her third mayoral run, Flores López was up against eight women and three men. During her congressional campaign, she said that men were opposed to her candidacy because they continued to think that the role of women was “to cook for them, iron their clothes and serve all their needs.”

When Flores López was elected to Congress, her first goal was to make sure Honduras would ratify Convention 169 of the International Labor Organization to provide rights and recognition to the country's indigenous people. It was passed in 1995.

On March 2, 2018, the second anniversary of her mother's murder, Olivia Zúñiga Cáceres marched through the streets of Tegucigalpa, the capital, with her fellow congresswomen, their hands full of white flowers and candles. Olivia Cáceres announced that she wanted to pass the Berta Cáceres Law, which would cancel all the concessions illegally granted to Desarrollos Energéticos S.A., the company that wanted to build the dam on indigenous lands. The day after Olivia Cáceres marched, police arrested DESA's executive president, Roberto David Castillo Mejía, and charged him with orchestrating Berta Cáceres’s murder.

“The leadership of my mother taught us to imagine powerful women leaders,” said Laura Zúñiga, another of Berta Cáceres’s four children (three daughters and one son). Like her grandmother, Laura Zúñiga had trained to be a midwife; and like her mother, she became an activist and a member of the Civic Council of Popular and Indigenous Organizations of Honduras (Copinh). Berta Cáceres co-founded Copinh, which formed in 1993 with the mandate to defend indigenous territory, natural resources, health, education and women’s rights. From the start, women were the mobilizing force in the organization because Berta Cáceres encouraged them to participate and speak up. She taught them that silence was not an option.

In 2015, Berta Cáceres won the prestigious Goldman Environmental Prize for her decadelong fight against the Agua Zarca Dam. Many in her community suspected that the intellectual authors of the crime were part of the company building the dam. “Clearly, the company assassinated her,” said Bertha Zúñiga, the general coordinator of Copinh, commenting on her mom’s assassination a full six months before the official investigation would come to the same conclusion.

Of her politically minded, feminist daughter, Flores López said, “She understood the necessity to create a strong organization for women to protect our right to vote and to be elected.”

The Lenca community, inspired by the legacy of Berta Cáceres, gathered to reaffirm their support to protect indigenous water and land.

When I visited Río Blanco, indigenous land near where the dam was planned, with the Nobel Women’s Initiative in October 2017, accompanied by Nobel Peace laureates Tawakkol Karman and Shirin Ebadi, we were greeted by a group of girls chanting, “Berta was a fighter! Berta was courageous! Berta protected our rivers!”

The initiative had traveled to the region on a fact-finding mission to support and listen to the needs of indigenous women community leaders. (Results of that mission can be found here.) The community there was preparing for a ceremony to honor Cáceres, and people shared stories of how the activist had influenced their lives. In the crowd of about 150 people, young and old alike held posters that read, “Berta lives!”

Activist Lilian Esperanza López Benítez, who first met Berta Cáceres in 2008, said to those assembled, “If women aren’t a part of the struggle, then the struggle doesn’t exist.”

López Benítez had experience fighting against a hydroelectric project in her own community. She's from La Paz, Honduras. In 2012, she became the coordinator of Copinh, then oversaw its finances, and now is the women’s coordinator. She discussed the racist and patriarchal history of her country, providing examples of how women were silenced when they tried to access basic rights, like justice. The first response of the police and the courts, in many cases, was to blame the victims.

“I work in Copinh communities to organize councils of women to help them recognize their rights and to ensure that those rights are respected,” López Benítez explained. “They assassinated Berta because they thought that they could destroy Copinh that way. They didn’t know Berta and that she had 200 communities behind her. We are strong women and we will always continue to fight, and the legacy of Berta lives on.”

For Laura Zúñiga, the process of assuming leadership as an activist has been both natural, given her upbringing, and unnatural, given the nature of her mother’s death. She was part of a group of children of activists whose parents had been assassinated, and they helped her navigate her grief. She also found strength in the collective work of Copinh but admitted “it is difficult to separate that work from the context in which the response to a woman who decides to empower herself is macho, patriarchal and extremely violent. Part of my mother’s murder was that it was the response of the patriarchal structure to a woman who says, ‘I will stand up for myself. I am empowered.’”

Laura Zúñiga likes contributing to the community as a midwife. In her travels to visit communities associated with Copinh, she notices that women are speaking up more, which makes her hopeful. “I feel that my job is to grow as much as I can and to contribute everything I can,” she said.

A few months after Berta Cáceres's murder, two more activists were murdered. In Honduras, one woman dies violently every 17 hours on average, and the impunity rate for crimes against women is 95 percent. Activists and human rights defenders, especially women, are frequently the targets of such violence. The equality that Flores López and her daughter and granddaughters are fighting for has not become a reality for most women in the country.

Flores López commented, “There have been improvements in terms of women’s participation in politics at the regional and national level. But women in Honduras live in a state of defenselessness, persecution exploitation and misery, especially in indigenous and rural communities.”

“We came here to tell the women of Latin America that your struggle is our struggle,” said Nobel Peace laureate Tawakkol Karman at the ceremony held to honor Berta Cáceres. Karman traveled to Guatemala with the Nobel Women’s Initiative to support indigenous women leading their communities to protect their water and lands.

In response to elevated levels of violence against women, Copinh is working to establish a women’s court and a women’s assembly so that women in the community can file complaints via such organizations. López Benítez explained, “Daily, women file police reports, and they never get a response from the police. Women don’t want to register complaints because we know there won’t be a response until we show up dead.” Despite the fact that López Benítez had also been persecuted and experienced violence for being an activist, she said that her five children have always supported her, and that makes her strong.

The Cáceres daughters have continued to work collectively with indigenous communities to keep her values alive in fighting for equality, the environment and justice. Laura Zúñiga explained, “What we have learned from our mother and grandmother is not to be discouraged, not to stop — even when it is uncomfortable because a woman’s word is disruptive to society.” As for Flores López, she plans to continue helping young women run for office, to empower them just as she did with her daughter and her granddaughters.