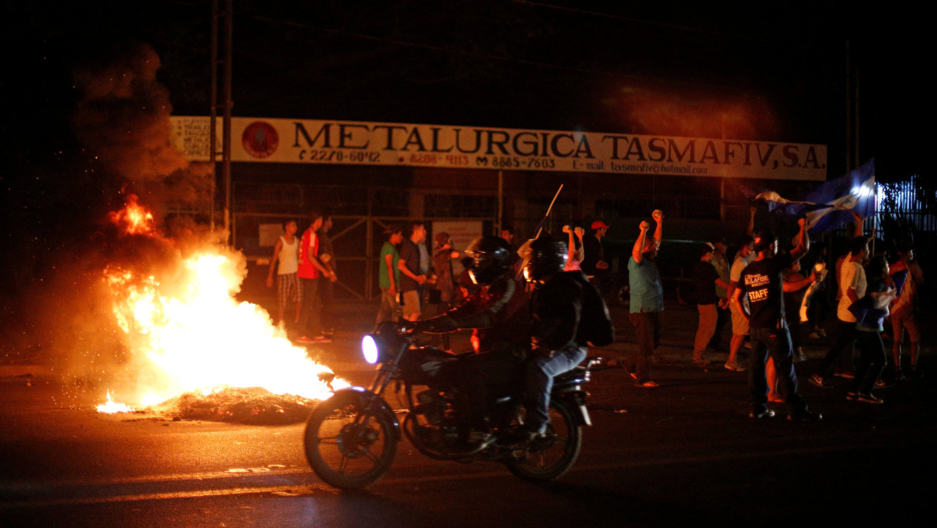 Demonstrators shout next to a burning barricade as they take part in a protest over a controversial reform to the pension plans of the Nicaraguan Social Security Institute (INSS) in Managua, Nicaragua, April 21, 2018.
Credit:

A student was shot dead in Nicaragua late on Sunday, the Red Cross said, bringing the total death toll to nine in the latest unrest, as the United States ordered its embassy staff out of the country and curbed consular services.

Police clashed with students bunkered down at the Polytechnic University of Nicaragua on Sunday night, and one died after being shot while five others were treated for injuries, Lissett Guido, a Red Cross spokeswoman, told Reuters by telephone on Monday.

Guido said the Red Cross had registered nine deaths since the protests began Wednesday, and attended to 433 injured people. The Nicaraguan Center of Human Rights (CENIDH) said on Monday at least 25 people had died. Marlin Sierra, the director of the CENIDH, said 120 people had been arrested.

A police crackdown on protesters and curbs on some media have fueled broader criticism of Ortega. On Sunday night, in an effort to calm the streets, Ortega said he had canceled the welfare-overhaul initiative.

While two major marches were due on Monday, there was little evidence of people gathering for the first, called by students from the Polytechnic University for 9:00 a.m. local time.

It was unclear what the turnout would be for a march at 3:00 p.m., called by Nicaragua's main business lobby.

The US State Department official said the embassy in Managua would be unable to provide routine services to the public until further notice, but would continue to be available by phone for emergencies and provide services to US citizens and visa applicants.

Nicaragua has been one of Central America's more stable countries, mostly avoiding the turmoil caused by gang violence or political upheaval that has affected nearby Honduras, El Salvador and Guatemala.

"Political rallies and demonstrations are occurring daily, often with little notice or predictability. Some protests result in injuries and deaths," the State Department said.

It said the purchase of food and fuel may become harder and access to the airport in the capital of Managua may be blocked.