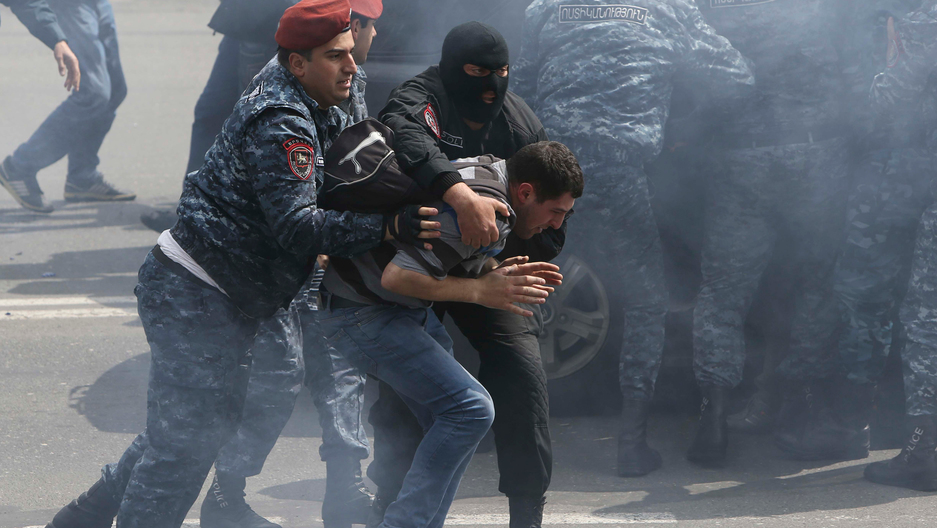 Law enforcement officers detain a man as participants of the rally protest against the appointment of ex-president Serzh Sarksyan as the new prime minister in Yerevan, Armenia, April 22, 2018.

Nearly 200 protesters were detained on Sunday including three prominent opposition leaders during the latest demonstrations against the appointment of the former President Serzh Sarksyan as prime minister.

Protesters accuse Sarksyan of clinging to power after he was appointed premier this month following 10 years as president. Tens of thousands of opponents have marched through the capital Yerevan, blocking streets in the city center and staging sit-ins.

Under a revised constitution approved in a 2015 referendum, most state powers have shifted to the prime minister while the presidency has become a largely ceremonial post.

Police said in a statement that opposition politician Nikol Pashinyan and two other lawmakers had been "forcibly removed" from the protest. A Reuters reporter witnessed the 'red berets,' as Armenian special forces are known, grab one lawmaker by his hands and feet and carry him behind the police cordon.

The public prosecution service confirmed the three opposition leaders had been detained on suspicion of organizing an illegal protest. 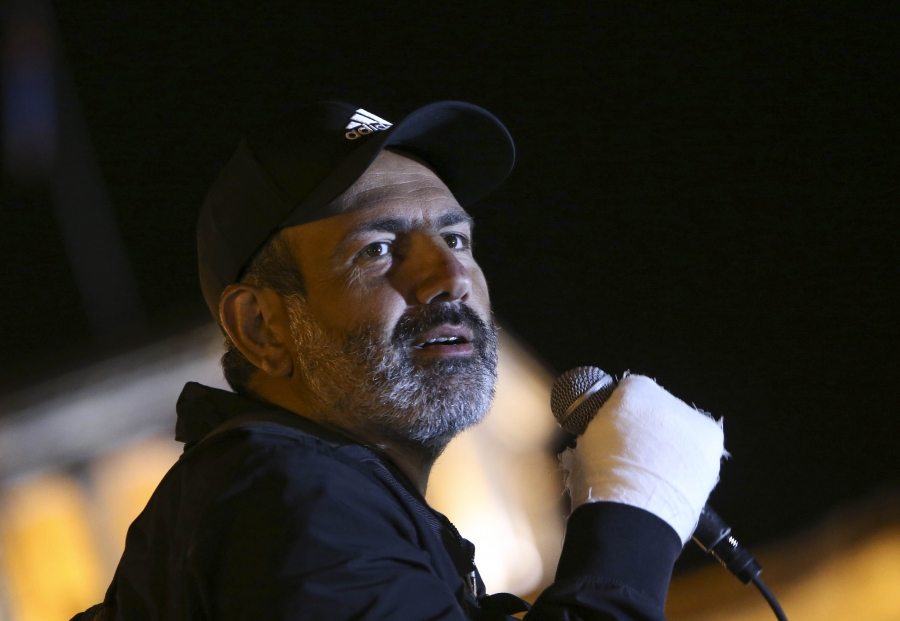 Armenian opposition leader Nikol Pashinyan delivers a speech as participants of the rally protest against the appointment of ex-president Serzh Sarksyan as the new prime minister, April 20, 2018. Pashinyan was arrested Sunday after televised talks with Sargsyan collapsed.

Almost 200 people have been taken to police stations by law enforcement, Interfax news agency cited police representatives as saying. Seven people had been taken to hospital, the Ministry of Health said in a statement.

According to the law, the detainees must either be released within 72 hours, or a criminal case can be opened against them, leading to a longer-term arrest.

Opposition leader Pashinyan had earlier held talks with Sarksyan, who walked out of the meeting after accusing his opponents of trying to "blackmail" the authorities.

"This is not talks, not a dialogue, it's just an ultimatum, blackmail of the state, of the legitimate authorities," Sarksyan had said.

Armenia seceded from the Soviet Union in 1991 but remains dependent on Russia for aid and investment. Many Armenians accuse the government of corruption and mishandling an economy that has struggled to overcome the legacy of central planning.

Demonstrators continued to march in large numbers in the capital, blowing vuvuzelas and sounding car horns, despite earlier attempts by police to break up the march with batons and shields.

The police called on protesters to stop the situation from escalating, Interfax news agency said, quoting an official statement.

"If these demands are not fulfilled, the police has the right to take demonstrators into custody and to use force," Interfax cited the statement as saying.

In a statement, the European Union's foreign policy arm called for more dialogue and a peaceful resolution.

"All those who have been detained while exercising their fundamental right of assembly in accordance with the law must be released immediately," it said.

"It is of utmost importance that all parties involved show restraint and act responsibly."

"I am telling you: you have no understanding of the situation in the country. The situation is different to the one you knew 15-20 days ago," Pashinyan had told Sarksyan on Sunday.

"The situation in Armenia has changed, you don't have the power of which you are told. In Armenia, the power has passed to the people," he said.